Global Selling Persists but Yen Eases; Pound Down Before Carney

The Dow Jones FXCM Dollar Index is scrapping back some of its losses yesterday and now appears to be forming a minor Bull Flag on the daily chart. Whereas the Australian Dollar, the British Pound, and the Euro have all been cooperating with the US Dollar’s attempt to strengthen, the simple demand for liquidity amid risk-aversion has prevented any such progress against the Japanese Yen.

Today, the USDJPY has started to take back some of its losses from Tuesday, but gains have been limited as pressure on emerging markets remains. It seems that a negative feedback loop is setting in, driving down investor sentiment and exacerbating stress in markets around the world:

Certainly, the global selloff has hardly reached the European currencies, which have turned into a near-term safe haven of sorts amid turmoil in the commodity currency complex. But the British Pound today especially is vulnerable to a setback.

Bank of England Governor Mark Carney will give his first policy speech today, and in light of recent price action in the British Pound and UK Gilts, we are expecting a dovish tone to be struck. In the Quarterly Inflation Report (QIR) released earlier this month, economic “circuit breakers” were identified that would signal a wind down of the BoE’s easing program.

While the initial commentary from Governor Carney may prove to be dovish, it will take a concerted shift in his policy stance – even more dovish – in order for the desire effect to be achieved: softer UK yields. Accordingly, barring an overtly dovish tone, it is possible that the Sterling sets up an opportunity to buy the dip later today. 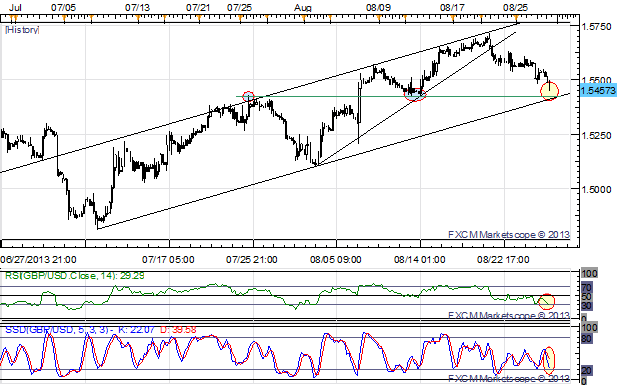 GBPUSD (H4) – The advance off of the July 9 low (yearly low) remains intact although a potential Bearish Rising Wedge is threatening the advance. The wedge breakdown began on August 21 and is approaching a confluence of support:

- With the H4 RSI already in oversold territory, any additional selling pressure could be stunted.

- A ‘dip then rip’ scenario could occur in the GBPUSD if Governor Carney’s speech today follows a similar template to the reaction following the QIR.