The British Pound has emerged as an unlikely top performer and perhaps safe haven du jour as few developed economies have seen the resiliency the UK economy has since May. The past week or so, the Sterling has been quite strong against the commodity complex in particular, as emerging market weakness has started to impact the entire Asian-Pacific region.

Further Sterling gains shouldn’t be ruled out, even if the currency may be overbought in the near-term per technical indicators on H4 and daily timeframes (in particular against the Australian, New Zealand, and US Dollars. So far in August, the GBPAUD has appreciated by +2.60%; and over the course of the 3Q’13 so far, +4.24%. By comparison, the AUDUSD is up by +0.48% in August; and down by -1.25% in the 3Q’13.

So, as we wait for the most up-to-date information on the Fed’s QE3 taper today in the form of the July FOMC Minutes, the fact that the British Pound is the top performer and only currency to out maneuver the US Dollar bodes well. Even if the GBPUSD turns on signs of ‘Septaper’ coming to fruition, the British Pound should remain well-favored elsewhere for the foreseeable future.

Taking a look at European credit, peripheral bonds have continued to leak higher as European equity markets have struggled the past few days, proving to be a slight negative influence on Wednesday.Should this relationship persist – weaker credit and equities – the Euro could face increased pressure over the next several sessions. 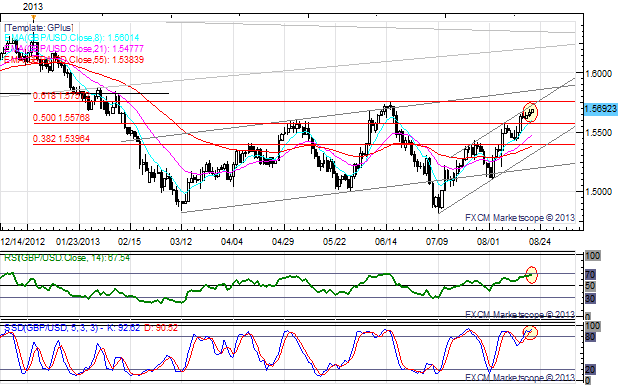 GBPUSD (D) – I maintain: “The pair continues to impress since early-July but there are signs of near-term exhaustion developing. Gains have been harder to come by the past few days despite broader US Dollar uncertainty; and the British Pound has been less enthused by stronger than expected data.

"Now, the daily RSI and Slow Stochastics (5,3,3) are approaching overbought territory as the pair nears resistance. Mid-June swing highs, the 61.8% Fibonacci retracement of the yearly high low, and ascending channel resistance (July 9 and August 2 lows to July 23 high) all come in between $1.5720 and 1.5760 this week. “