Another day absent of noteworthy data from Europe or North America has traders honed in on QE3 speculation – whether or not the ‘Septaper’ will come to fruition. That would explain volatility in emerging markets the past several days, with the Indian Rupee notably falling to all-time record lows against the US Dollar (USDINR eclipsed 64.00).

The volatility found in the developing world the past few days has reached the major currencies covered by DailyFX Research, with the more growth-sensitive and risk currencies, the Australian and New Zealand Dollars, falling back sharply across the board overnight.

For the Australian Dollar, it’s not just about emerging market weakness, though equity markets across Asia are pushing the ‘risk-off’ trade today (weaker AUDJPY). In addition, the Reserve Bank of Australia’s August meeting Minutes suggested that the rate cut cycle might not be over as it originally appeared to be, with a rate cut neither imminent nor entirely dismissed – it all depends on incoming data.

Despite there being no news on the calendar today, speculation ahead of the July FOMC Minutes is already quite apparent given the uptick in volatility. Accordingly, we suspect the next several days will more closely resemble the price action seen overnight on Tuesday rather than what was seen to start the week. Indeed, FX markets are bracing for QE3 taper speculation.

There are no events on the calendar for Tuesday, August 20. 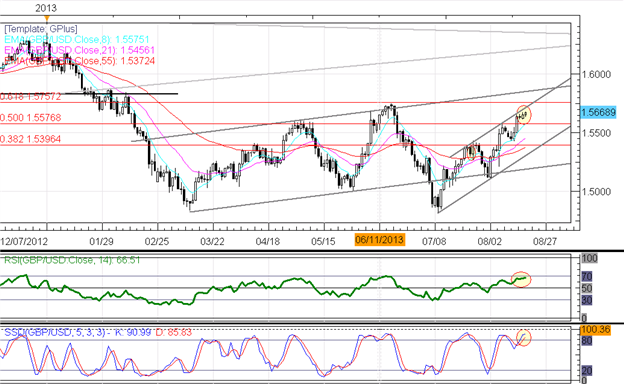 GBPUSD (D) – The pair continues to impress since early-July but there are signs of near-term exhaustion developing. Gains have been harder to come by the past few days despite broader US Dollar uncertainty; and the British Pound has been less enthused by stronger than expected data. Now, the daily RSI and Slow Stochastics (5,3,3) are approaching overbought territory as the pair nears resistance. Mid-June swing highs, the 61.8% Fibonacci retracement of the yearly high low, and ascending channel resistance (July 9 and August 2 lows to July 23 high) all come in between $1.5720 and 1.5760 this week.