It’s been a quiet start to the trading week thanks to a barren economic calendar; but with several important data and events due over the next few days, the newswires shouldn’t stay quiet for long. This week is notable in particular given two important Federal Reserve events that should give greater insight as to which way the central bank is leaning towards tapering QE3 in September.

On Wednesday, the first of the two Fed related events, the July FOMC meeting Minutes, could prove to be a bearish catalyst for the US Dollar. The policy statement released after the July meeting showed that policymakers had become wearier of the soft inflation backdrop, with the only dissenter from the June meeting falling back in line thanks to the dovish adjustment in language.

With the FOMC minutes setting a cautious yet hopeful backdrop for US growth prospects, the Jackson Hole Economic Policy Symposium scheduled to take place at the tail end of the week will be viewed purely through the lens of the QE3 taper.

Although Fed Chairman Bernanke won’t be there, that doesn’t mean that clues on QE3 won’t be present. A big focus will be whether or not policymakers feel that the US economy is strong enough to withstand (potentially sharply) higher interest rates at this point in the recovery. Volatility will then be derived from the juxtaposition of tapering QE3 in an improved growth environment versus a stumbling one.

As it stands now, the 'apocalypse' scenario looks unlikely to play out – that the Fed is looking to taper QE3 irrespective of any incoming data; surely a sign of asset bubbles having formed in global equity markets and US Treasuries.

With no news on the calendar today, consolidation is very much afoot, with the US Dollar trading within one-quarter of a percent against all of the majors but for the New Zealand Dollar. This period of relative calmness shouldn’t go beyond a day or two as currency markets have already shown signs of bracing for QE3 taper speculation.

There are no events on the calendar for Monday, August 19. 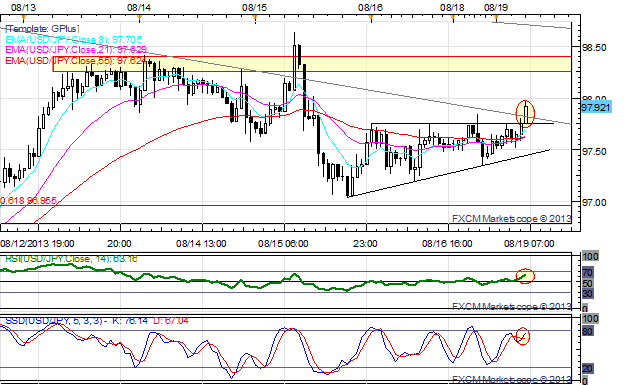 USDJPY (H1) – The USDJPY took a hard spill on Thursday and fell out of an ascending channel that guided price from the weekly low on Monday. However, choppy trading that past 48-hours may have produced a bottom, with a Bullish Ascending Triangle appearing and breaking to the upside on the H1 timeframe.

As such, with prior intraweek swing resistance coming in at ¥98.25/40, gains could accelerate on Monday before sellers reenter the picture some 30-50-pips higher. At that point, the H1 RSI and H1 Slow Stochastics (5,3,3), both of which are presently bullish, should be in overbought territory indicating a point to trim back bullish bets (should such a situation play out).