British Pound Gains After Retail Sales, Dollar Down Overnight; US CPI Ahead

More good news out of the United Kingdom this morning with the July Retail Sales report crushing expectations, and quickly elevating the British Pound to an eight-week high against the US Dollar. Unquestionably, data out of the UK has been the best among the currencies covered by DailyFX Research the past two-months, underpinning a swift turnaround in the Sterling’s fundamentals.

Even as the British Pound adds to its recent gains, it cannot take claim of top performer on the day, That instead goes to the New Zealand Dollar, whose neighbor the Australian Dollar is in a close second, up by +0.73% and +0.64% against the US Dollar respectively.

I believe that the broad US Dollar weakness, and thus prevailing favor towards the commodity – higher yielding – currencies is no coincidence in light of St. Louis Fed President James Bullard’s comments on inflation yesterday and the upcoming July US Consumer Price Index today.

President Bullard’s main critique of the Fed’s shift – most visible by his dissent at the June FOMC meeting – has been that it threatens to undermine the Fed’s credibility on inflation. That is to say, with inflation running so low, the Fed’s dovish credentials may be at stake (which would render QE a hapless exercise); and therefore any exit from QE3 is premature.

We thus turn to the US CPI report for further direction on the US Dollar, which has come off across the board. Another soft CPI print could be a metaphorical nail in the coffin for a ‘Septaper’; but a surprise to the upside (perhaps resulting from improved July consumption figures) would restore any lost confidence and help the US Dollar continue its rebound from a two-month low. 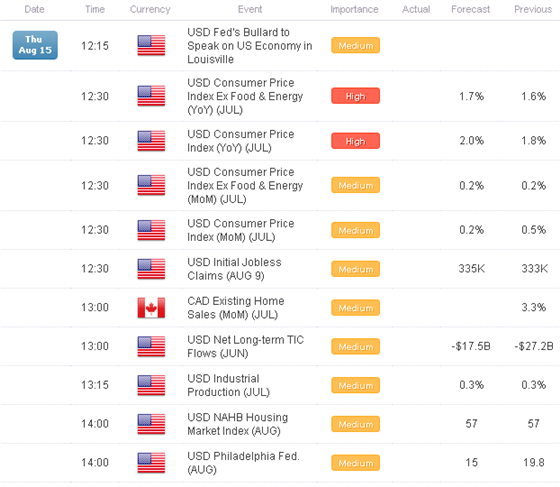 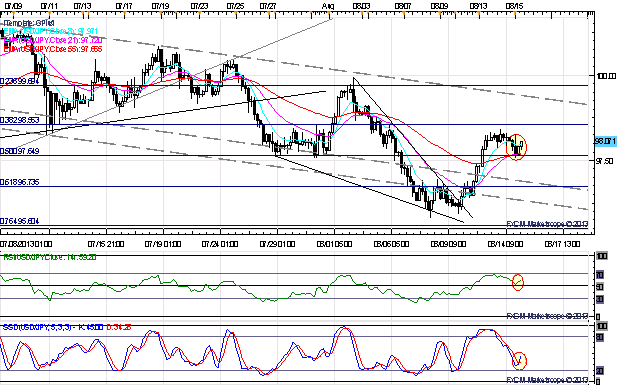 USDJPY – The overbought readings in both H4 RSI and Slow Stochastics (5,3,3,) have been resolved but only little downside was produced, with price maintaining ¥98.00. Accordingly, with H4 candles finding support at the conflux of the 50% Fibonacci retracement from the June low to July high and the 21-/55-EMA bullish crossover at 97.50/70, the next leg higher looks ready to begin. The Bullish Falling Wedge pattern first identified on Sunday night remains valid and points to 99.80/100.00.