The European currencies, praised late last week for their ability to hold onto recent excess gains versus the US Dollar, have hit a wall so to speak. Whereas the British Pound continues to benefit from recent data and commentary from policymakers – and rightfully so – neither the Euro nor the Swiss Franc can benefit from what has been a steady stream of positive data from continental Europe.

Today is the perfect example of this new, near-term paradigm. The British Pound took back all of its losses after the July UK labor market update showed that while the Unemployment Rate was steady at 7.8%, first time claims figures dropped, a sign that hiring is outpacing firing.

This report was important because of what the Bank of England said last week with respect to “forward guidance,” insofar as to say that the BoE’s main interest rate would be kept at 0.50% through 2016, barring the CPI staying elevated above +2.5% y/y or the Unemployment Rate dropping below 7.0%.

The combination of an improved UK labor outlook and an optimistic BoE (per the August meeting Minutes) puts the British Pound back on top among the European currencies; and I would expect Sterling outperformance relative to its European peers to continue.

Mainly, the Sterling should outperform the Euro simply because the Euro can’t catch a break. Today’s improvements in 2Q’13 GDP across the board – French, German, and broader Euro-Zone figures all beat expectations – failed to produce a positive reaction in the Euro despite the implications of a rebounding Europe. Certainly, failure by the Euro to appreciate on strong data may be a warning sign that further weakness is due.

With the Euro weaker against the US Dollar in the wake of the improved growth figures, focus shifts to the North American calendar for potential event risk catalysts. Unfortunately, there are none, despite the July US Producer Price Index due (which hasn’t been market moving in recent months/years, at least in FX). As such, more technical trading conditions should dictate price action on Wednesday. 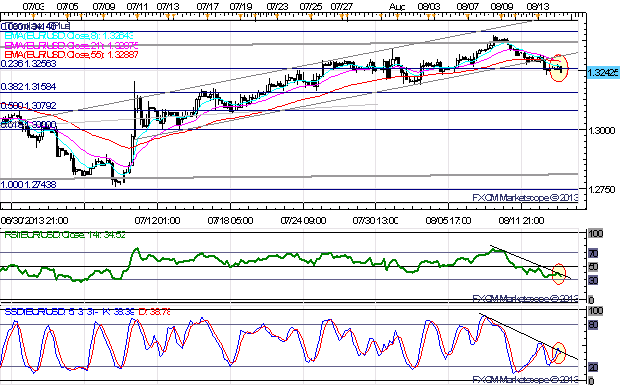 EURUSD – A look at the H4 chart shows that the channel off of the July 10 and August 2 lows (parallel drawn to the July 16 high) has broken to the downside, with the daily RSI and Slow Stochastics (5,3,3) confirming the move lower. Accordingly, a close and hold below $1.3255 today should put pressure to the weekly low near 1.3230; though a more concerted level of support should come in at 1.3180/200. The bearish bias is warranted intraweek so long as 1.3315/20 holds to the upside.