'Septaper' On? US Dollar Leads as Asian-Pacific FX Slides to Start Week

The six-day losing streak that had befallen the US Dollar all of the last week and then some could end today thanks to renewed speculation that the Federal Reserve may taper QE3 at its September meeting, as well as a bit of key disappointing data out of Japan. Overall, the US Dollar is up by a mere +0.28% on the day and was +0.38% off the lows at the time this report was written.

With a strong calendar for the week ahead, traders may have begun positioning for outperformance by the US Dollar to start the week. Certainly, if US economic data picks back up, the QE3 taper trade may come back in full force, as it was active in April, May, and June: short commodities, especially Gold and Silver; short US Treasuries on account of higher expected yields; choppy but bullish equity markets; and a stronger US Dollar.

Thus far, while early-week positioning may be suggestive of a stronger US Dollar in the days to come, the buck was certainly aided by the soft 2Q’13 Japanese GDP report, which throws a wrench into any fiscal reform efforts by the Shinzo Abe-led Japanese government.

Certainly, with growth coming in well-below expectations, any measure that might dampen consumption going forward – say, a sales tax hike – could weaken the economy even further and thus warrant another round of stimulus from the Bank of Japan, which would be bearish for the Yen. We are indeed looking for the Yen to moderate this week, as Quantitative Strategist David Rodriguez notes.

With a light economic calendar today in Europe and North America, trading should begin the week more ‘technically’ or ‘longer-term,’ in the sense that there are few expected near-term catalysts that might drive volatility. Accordingly, interest around the European currencies should pick back up tomorrow with July UK Consumer Price Index, which is increasingly important in the wake of the Bank of England’s new “forward guidance” policy.

Read more: Euro Struggling amid Stronger Data May Be a Warning Sign 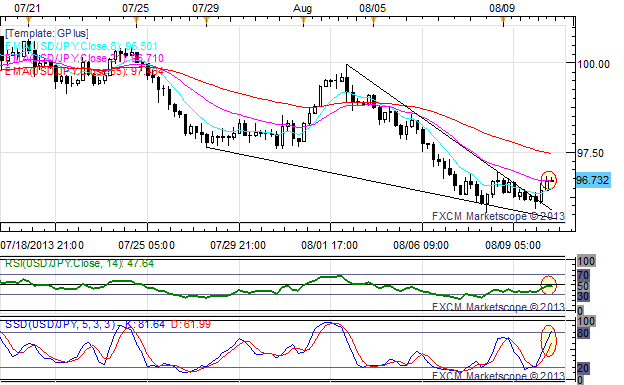 USDJPY – While the USDJPY has slid below channel support (July 8 and July 19 highs, parallel drawn to the July 12 low), there may be signs of near-term basing and an attempt to retake the channel. On the H4 chart, a Bullish Falling Wedge has formed, and indicators on the daily chart – RSI basing above 40 and the Slow Stochastics (5,3,3) turning bullish in oversold territory – confirm that a turn may be coming. I’m looking USDJPY long above ¥95.70/80 into 98.00 for now; though a break of 98.00 would confirm the reversal and point for a rebound towards 99.50 and 100.00.