The US Dollar is in the midst of a six-day losing streak that has seen the world’s reserve currency track to its lowest level since June 20. The downturn, spurred on by a disappointing July US NFP report last Friday, has mainly benefited the Australian Dollar, which is in the midst of its best week in two years.

Aussie strength has accelerated the past two days as swaps markets are only pricing in a 60% chance of another 25-bps cut by year end from the Reserve Bank of Australia, whereas that number was 72% in the wake of the RBA’s cut to 2.50% this Tuesday. Shifting rate expectations, while still technically dovish for the Australian Dollar, can prove to be positive so long as Chinese data continues to stabilize.

Beyond the Aussie, two currencies that saw a dearth of weak economic data in the early part of the year – the British Pound and the Euro – have been riding what has been a wave of positive surprises since late-May. While neither has posted extensive gains today versus the US Dollar, both remain at multi-week highs (the Euro since pre-FOMC in June; the Sterling in seven-weeks).

With a light North American economic calendar due in several hours, volatility is likely to die out into the end of the week. However, excitement around the European currencies should build early next week as there are several significant events due. Especially in the wake of the Bank of England’s shift in monetary policy this week,the July UK Consumer Price Index report and the June UK labor market reading will have elevated importance. 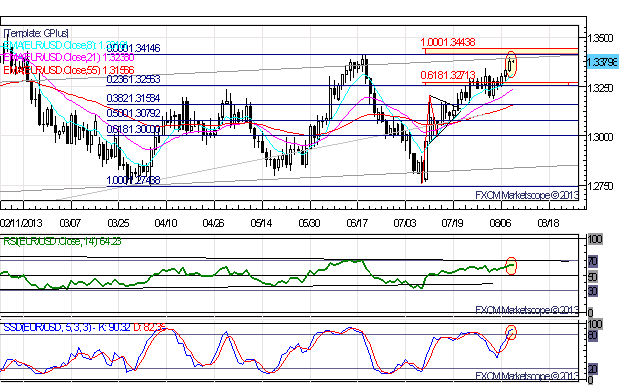 EURUSD – The rally off of the early-July lows continues to progress as anticipated, with the 100% extension target yet to be achieved from the Symmetrical Triangle consolidation pattern that formed July 11 to July 19. The 100% extension comes in at $1.3444, just above the pre-June FOMC meeting high; resistance should be found in the ‘sandwiched’ region of 1.3415/45.

Accordingly, with the daily RSI showing signs of pending bearish divergence and the daily Slow Stochastic (5,3,3) reaching overbought territory and starting to compress, I am looking for one more new high in the EURUSD near 1.3415/45 at which point I will look to sell for countertrend, near-term pullback.