Aussie Rebounds on Stronger Chinese Trade Data - Is a Bottom in Place?

It is no secret that the Australian Dollar has been picked on in recent months by its major FX counterparts. Since April 11 (2Q’13 high for AUDUSD), the Australian Dollar has lost: -21.24% to the Japanese Yen; -19.29% to the Euro; and -17.17% to the US Dollar. Thus, today’s breakout performance across the board – no other major is close to performing as well as the Aussie – has stirred hopes of a “bottom” forming.

If there is a near-term pause in Aussie selling, given the strong bearish technical momentum behind AUD-based pairs, several strong fundamental catalysts are required to help carve out any bottoming on the charts. The Reserve Bank of Australia on Tuesday may have provided the initial spark, as the impact of the 25-bps rate cut was largely priced in; and therefore the less than dovish guidance proved to be a bullish catalyst.

Certainly, it wasn’t the July Australian jobs report that is fueling optimism: the Australian economy lost -10.2K jobs versus +5.0K expected; and the hold in the Unemployment Rate at 5.7% can be accredited to the -0.2% dip in the Participation Rate to 65.1% (not the sign of a strong labor market – an issue that the US economy faces right now).

Instead, it is Chinese data that is helping spur optimism, with the July trade figures showing both Imports and Exports expanded by more than expected last month. If short-term measures to help the country’s credit crunch are indeed working, then concerns over diminished Chinese growth could abate, providing the groundwork for a stronger Aussie in August.

The next such opportunity to see if the Aussie’s gains will continue comes tonight when the last of the Top 5 Events arrives: the July Chinese Consumer Price Index, often viewed as a strong proxy for Chinese growth.

Read more: Is the Australian Dollar on the Verge of a Major Recovery? 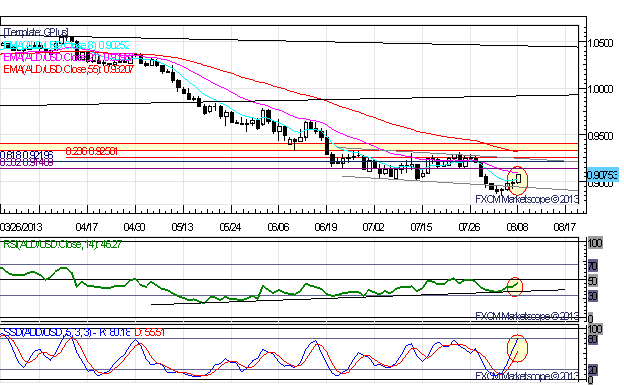 AUDUSD – The recovery from the lowest levels seen since September 2010 has been modest thus far, especially in context of the broader decline from mid-April. The descending channel that has guided the pair since late-June remains in place; and the gathering conflux of resistance above $0.9200 (several key Fibs relating to rally from 2008 low to 2011 high; 2010 low to 2011 high; and 2013 high/low. With the US Dollar reeling, further gains should be anticipated; although given the broader decline, only a weekly close above 0.9300 would given technical credence to a bottom having been established.