The British Pound is running neck and neck with the Japanese Yen as top performer to start the week, as the slate of improved British data since late-May continued. Today, it was the UK PMI Services report for July, surging to its highest level since December 2006, at 60.2 versus 57.4 expected.

The data follows last week’s improved July PMI Construction and Manufacturing reports, and overall caps what has been a stream of improved PMI surveys beginning in May. But as much as the British Pound has benefited the past few days, especially against the US Dollar (top performer; from $1.5102 on August 2 to as high as 1.5378 today), the streak of good fortune may hit a wall on Wednesday.

As per the Bank of England policy meeting on Thursday, Governor Mark Carney made clear that details on the central bank’s new “forward guidance” policy would be set forth alongside the pertinent Quarterly Inflation Report. In the July meeting, forward guidance was announced to reflect the BoE’s intent to keep rates pointed towards zero for the next several years. The reaction in the Sterling was quite negative; indeed, we are biased towards a bearish reaction by the British Pound.

Governor Carney has suggested that a nominal GDP target could work, and at the current rate of growth (+1.4% annualized), it’s no stretch of the imagination to think that a growth benchmark would be set higher (say, four consecutive quarters of growth exceeding +2%; or growth achieving +3%, etc). Regardless – the UK economy will fall short of whatever benchmarks are established at present time, which will deflate some of the optimism behind the Sterling. 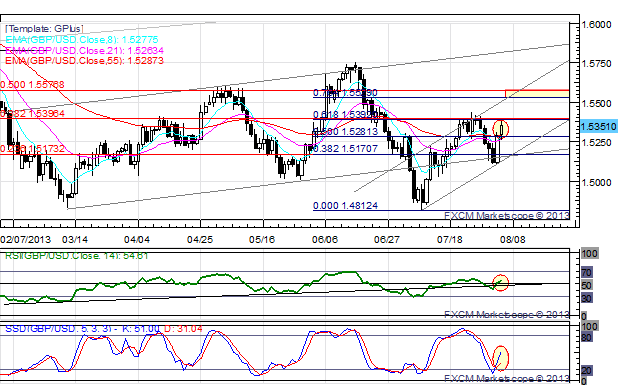 GBPUSD – The pair remains corrective after the rally off of the early-July lows, but a breach of the July highs around 1.5400 would negate this bias. The hold of the channel support at 1.5100/50 (off of the March 12 and May 29 lows) puts in focus a new developing ascending channel off of the July 9 and August 2 lows. Accordingly, a breach of 1.5430/40 puts in focus 1.5529/77 (ascending channel resistance; lower bound: 76.4% Fib retracement June high to July low; upper bound: 50% Fib retracement yearly high/low). A break of 1.5100 negates developing bullishness.