The Japanese Yen, the Swiss Franc, and the US Dollar – the “safe haven” bloc – are among the top performers for the second day in a row as global risk aversion gathers pace once more ahead of several significant events that will reverberate across the FX landscape. Consequently, high beta and risk-correlated assets such as the Australian Dollar are getting slammed today; the Aussie has lost over -2% to the US Dollar since Friday’s close.

The impetus for today’s slide in the Aussie comes on the back of the worst Building Approvals since August 2012, and the sharp downturn seen from April-June (+35.0% to -13.0% y/y) is very reminiscent of housing data seen at the end of 2008. While there was a 44% chance of a 25-bps rate cut at the end of the July meeting week, there is now a 92% of a 25-bps rate cut for the Reserve Bank of Australia meeting this coming Tuesday.

In the event of a rate cut next week, I still believe that the RBA will cut rates one more time in 2013, to bring the main rate to 2.00%. Accordingly, the Australian Dollar selloff might not be finished despite the consolidation seen in the AUDUSD the past month-plus.

Elsewhere, the Euro’s case for a strong week was bolstered as the Spanish GDP (2Q A) report beat expectations slightly, affirming the mild uptick in data seen in May and June. This week, the Euro could be a top performer if the cards fall right; next up is the ECB on Thursday. 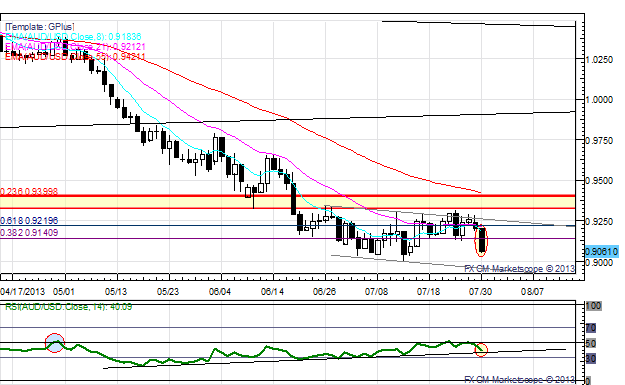 AUDUSD – A Bearish Key Reversal formed last week with the close below $0.9220 has proven fruitful after the initial fake out (price broke to new lows then reversed, but failed to retake the highs). I maintain: “Despite chopping around and through said level, the AUDUSD has more or less held the 38.2% Fibonacci retracement off the 2008 low to the 2011 high at $0.9141.” This consolidation may be breaking as the pair slides to the lower rail of the descending channel that has guided price the past month-plus. 0.8960 is seen as support, which should align with the daily RSI uptrend to serve as near-term support.