The Japanese Yen is once again the top performer, extending its gains from the end of last week after a slew of commentary over the weekend and at the start of trade on Monday from none other than Prime Minister Shinzo Abe and Bank of Japan Governor Haruhiko Kuroda. Much has been made about the final leg of ‘Abenomics’ – the “third arrow” as the prime minister calls it – as it bears the promise of extensive tax reform.

On the news that the long-discussed sales tax hike favored by PM Abe could be put off, the Japanese Yen rallied and the Nikkei 225 fell hard, ending down 3.32% on the session. While it seems counterintuitive that risk markets sold off on news of lower taxes, it is clear that the signal is that loose fiscal policy will be the primary stimulus tool going forward.

Thus, with lower taxes likely to remain, consumers have more disposable income, and sales are likely to be higher than they would have otherwise, which should (as the BoJ is hoping) push up prices (inflation). Given how tepid the inflation picture is in Japan still, tightening of fiscal policy would certainly choke off any inflation, which would force the BoJ to act again, as I see it. So: no tax hike, Yen gains.

While the calendar is quiet today, the action picks up midweek with the FOMC Rate Decision. This coming week features nearly twice as many as events as last week; and there are three central bank meetings ahead of the July US labor market report on Friday. Volatility has been increasing and should remain elevated for the coming week. 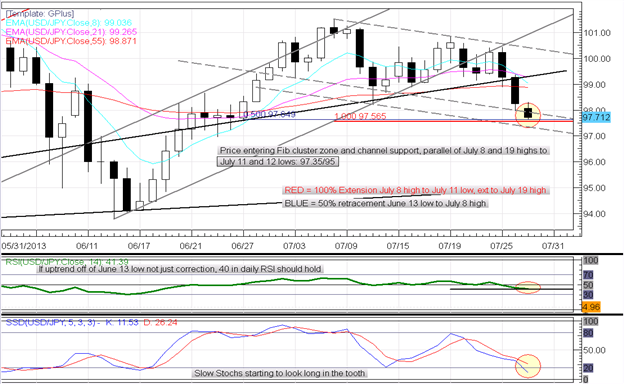 USDJPY – The USDJPY undercut trendline support off of the February 25 (Italian elections) and April 4 (BoJ announces massive easing program) lows, which is important considering their historical importance this year. Likewise, the uptrend off of the June 13 and July 11 lows cracked, and now a slight descending channel off of the July 8 and July 19 highs is guiding price action.

However, support may be found ahead of the central bank fireworks this week now that the USDJPY has traded into a conflux of significant levels. The 50% retracement of the June low to July high move comes in at ¥97.65; the 100% extension of the July 8 high to the July 11 low, extension to July 19 high move comes in at 97.57; and descending channel support with the parallels drawn to the July 11 and July 12 lows at 97.35/95.

If this price zone is to hold, then the daily RSI, just above 40, wouldn’t drop below said level on a daily close. For now, it is maintained, and with the Slow Stochastics (5,3,3) closing in on oversold levels, a bounce could be near before Wednesday.