Following the uptick in May and June PMI figures, sentiment around the 2Q’13 UK GDP print was quite bullish. Today, those bullish hopes were vindicated with the headline quarterly and yearly prints meeting consensus forecasts, provided by Bloomberg News, at +0.6% and +1.4%, respectively. Yet the British Pound has emerged as the worst performer on the day despite the best GDP report since the 4Q’11, perhaps an indication that market participants find that the data won’t be enough to dissuade the Bank of England, under newly-minted Governor Mark Carney, from implementing further accommodative measures.

Despite struggling elsewhere, the British Pound has outperformed the US Dollar handily the past few weeks, gaining +2.69% since July 9, climbing from $1.4815 to as high as 1.5393 two days ago. The reaction today underscores the uneasiness in being a Sterling bull in the wake of the July 4 BoE policy, despite the fact that the same meeting Minutes were the accelerant to see the GBPUSD climb so rapidly these past two weeks.

As I noted in my analyst pick on Monday, I believe that British Pound strength may be short-lived from the fundamental/policy perspective now that all of the positive news is ‘out of the way.’ As was made clear by the inclusion of a policy statement and forward guidance at the July 4 meeting, the intention of Governor Carney has been to clarify policy and be more transparent; the desired end result is to let market participants know that UK interest rates will be kept lower for the foreseeable future. Yet the reaction seen in the GBPUSD these past two weeks says that ‘no additional easing’ from Carney equates to ‘tightening.’ The BoE will take note and recalibrate quickly at the August meeting, which will be further Sterling negative. 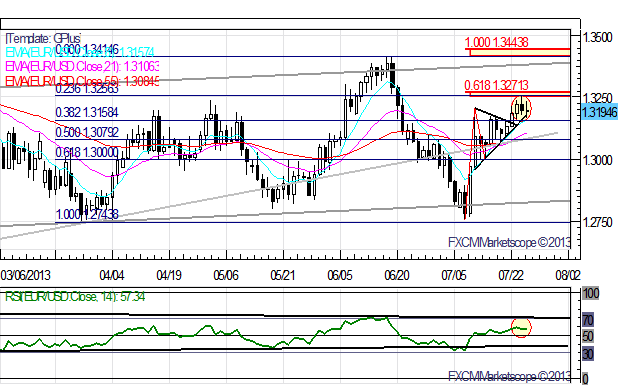 EURUSD: Yesterday I said that we “could see the pair trade into $1.3256/71 before pausing on the way towards 1.3415/44.” Price peaked at 1.3255 yesterday before reversing, giving credence to the 1.3256/71 resistance zone, at least in the short-term. A close under 1.3140 (triangle breakout level) would suggest that a near-term top is in place. The strategy remains to buy dips intraday; but failure to achieve the 100% extension target of the Bull Flag by the end of July would help to revive the dwindling Head & Shoulders bearish scenario. 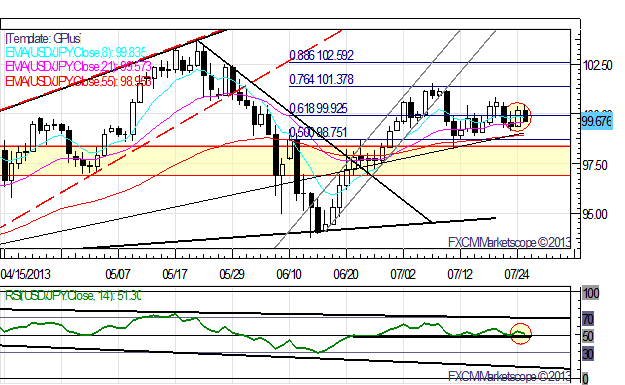 USDJPY: No change: “The rejection of the 76.4% Fib retracement at ¥101.35/40 (May high to June low) is only a near-term setback, as the break off of the late-May to mid-June correction in the pair completed the last week of June. …Indeed, the 50% retracement of the June low to July high at 98.75 held as support and the pair has already bounced higher…A daily close below 98.75 negates this bias; a move to 97.00 would be anticipated on a reversal lower.” While a Morning Star candle cluster (bullish reversal) was in the cards after yesterday, no follow through today keeps the outlook at neutral amid further ranging conditions. 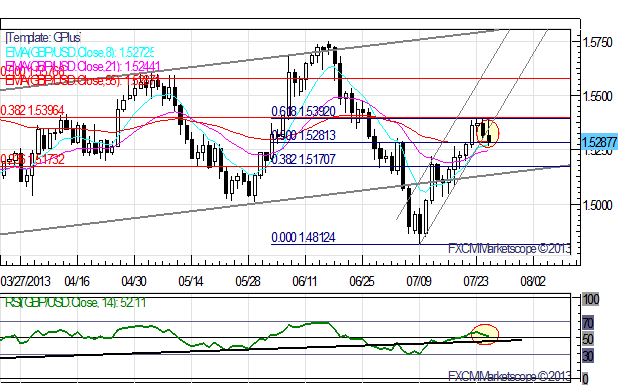 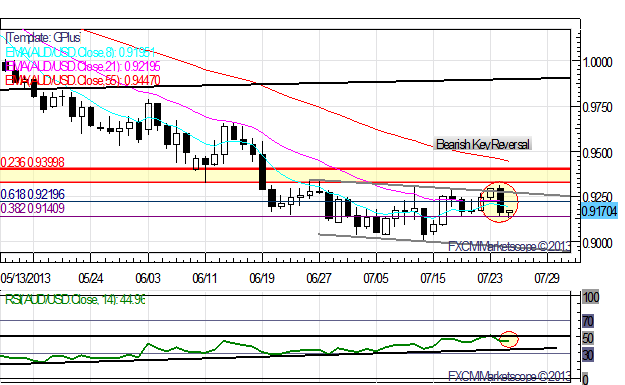 AUDUSD: A Bearish Key Reversal formed yesterday with the close below $0.9220m but thus far today there has been little follow through. While the bullish bottoming scenario has taken a hit, I maintain: “Despite chopping around and through said level, the AUDUSD has more or less held the 38.2% Fibonacci retracement off the 2008 low to the 2011 high at $0.9141. While fundamentally I am long-term bearish, it is worth noting that the most readily available data shows COT positioning remains extremely short Aussie. A Bullish Broadening Wedge may be forming at the lows as a base; 0.9750/75 would be the target on a close above 0.9415.” A close below 0.9140/45 today would confirm the bearish reversal. 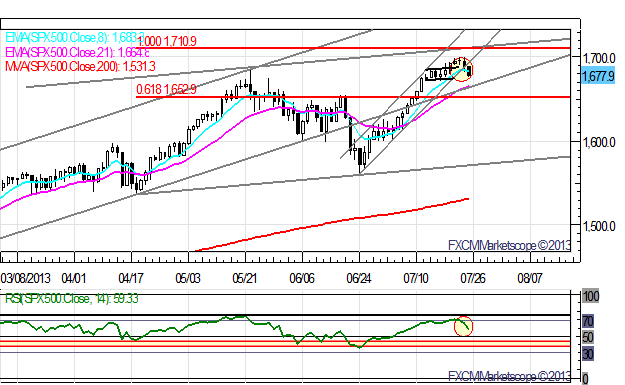 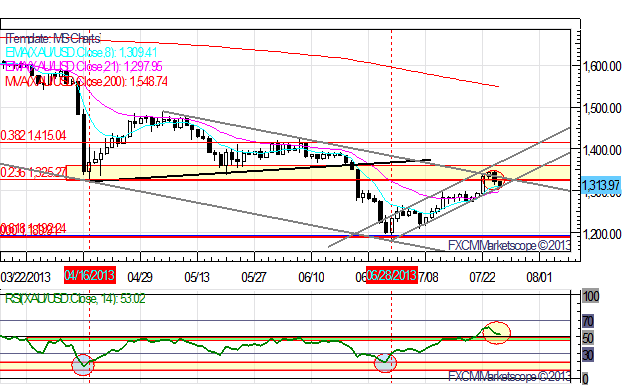