FX is a mixed basket this morning as the North American currencies and the Euro round out the top three, while the Australian Dollar and the Japanese Yen – often on opposite sides of the spectrum – are co-laggards. Notably, the July private sector reading of Chinese manufacturing growth, the HSBC Flash Manufacturing PMI survey, came in well-below expectations at 47.7, suggesting that the pace of the Chinese slowdown has accelerated.

Also hurting the Australian Dollar on the day was the softer than anticipated 2Q’13 inflation reading, which saw the headline yearly figure come in below the prior quarterly reading for the first time since the 2Q’12; the Consumer Price Index increased from +1.2% in 2Q’12 to +2.5% in 1Q’13.

In context of the broader slowdown in the Australian economy onset by the end of the global commodity supercycle, the softer inflation figures alongside a pressured labor market give reason to believe that the Reserve Bank of Australia may rethink the ‘pause’ in the rate cut cycle indicated in the July meeting Minutes; and the probability of a 25-bps rate cut at the August meeting has now increased from to 60% today, according to the Credit Suisse Overnight Index Swaps.

Elsewhere, the Euro’s resilience has continued amid signs that the Euro-zone may be starting to emerge from the depths of the recession, with the preliminary July Euro-Zone PMI composite ticking up to 50.4, the first reading in expansion territory (>50) since January 2012 (50.4). Growth speculation will accelerate should we see two consecutive readings above 50, which hasn’t transpired since July-August 2011. 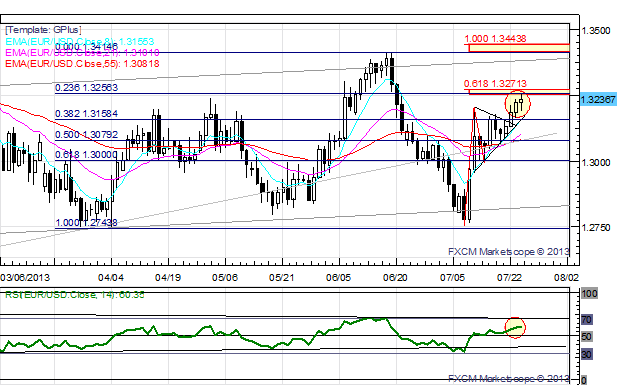 EURUSD: Yesterday I said: “Price is trading within the July 11 candle range for the seventh consecutive day, but a Bull Flag on lower timeframes (H1, H4) indicates the consolidation could end early this week.” Indeed, this has taken shape, and I noted yesterday in the DailyFX Real Time News feed could see the pair trade into 1.3256/71 before pausing on the way towards 1.3415/44. Failure to achieve the 100% extension target of the Bull Flag would revive the dwindling Head & Shoulders bearish scenario. 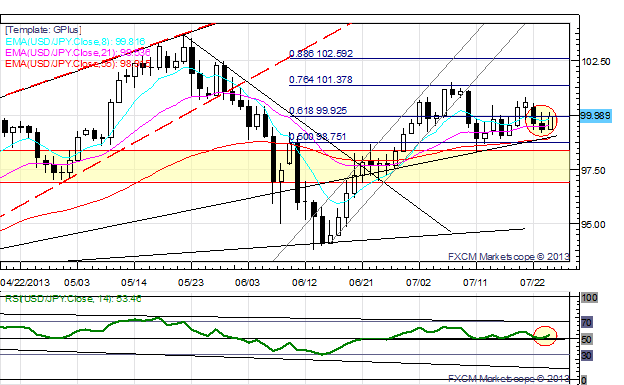 USDJPY: No change as prices have ranged the past two weeks: “The rejection of the 76.4% Fib retracement at ¥101.35/40 (May high to June low) is only a near-term setback, as the break off of the late-May to mid-June correction in the pair completed the last week of June. …longs preferred into early next week. Indeed, the 50% retracement of the June low to July high at 98.75 held as support and the pair has already bounced higher; a run at 102.00 shouldn’t be ruled out this week. A daily close below 98.75 negates this bias; a move to 97.00 would be anticipated on a reversal lower.” An Inverted Hammer yesterday followed by a strong rebound today would give credence to a bullish bias. 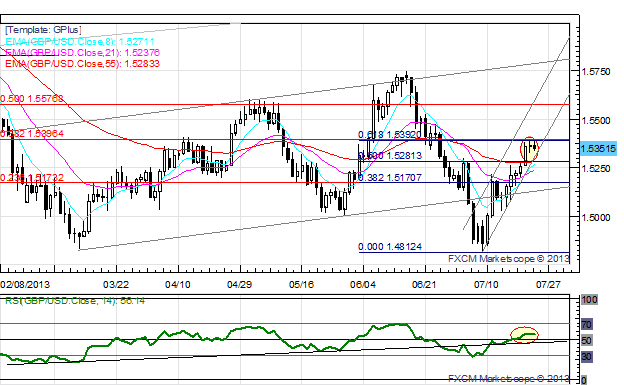 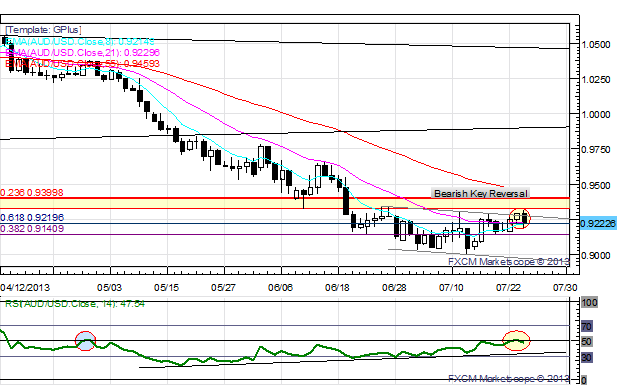 AUDUSD: No change, although it should be noted that a daily Bearish Key Reversal (today’s price eclipses yesterday’s high, then trades and closes at lower lows) may be forming, which could indicate a top against $0.9320 should price close below 0.9220. I maintain: “Despite chopping around and through said level, the AUDUSD has more or less held the 38.2% Fibonacci retracement off the 2008 low to the 2011 high at $0.9141. While fundamentally I am long-term bearish, it is worth noting that the most readily available data shows COT positioning remains extremely short Aussie. A Bullish Broadening Wedge may be forming at the lows as a base; 0.9750/75 would be the target on a close above 0.9415.” 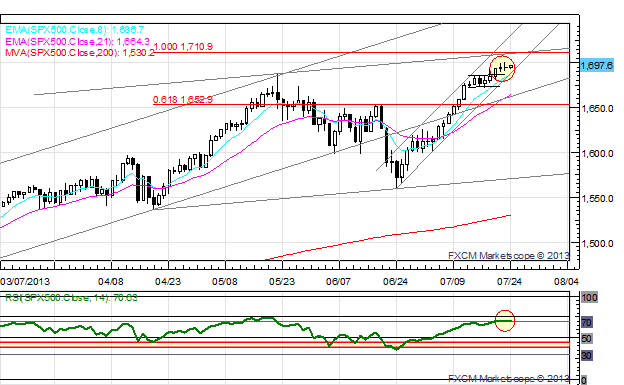 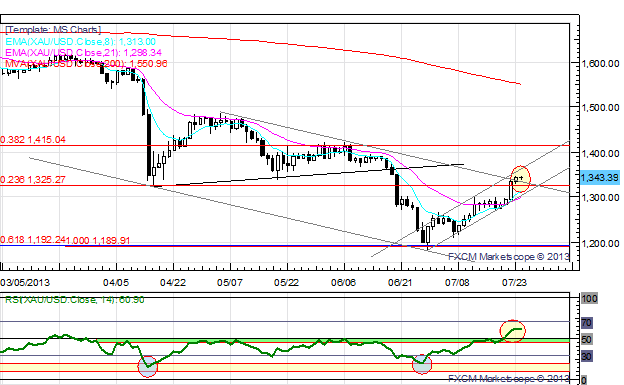