The Dow Jones FXCM Dollar Index (Ticker: USDOLLAR) is posting meager gains today and is relatively unchanged of recent, having declined by -0.19% the past five trading days. Considering the sheer number of market moving events that occurred between last Wednesday and Sunday, great volatility in the wake of Fed Chairman Bernanke’s testimony and the Japanese elections was anticipated.

Nevertheless, amid one of the lightest economic calendars in several months, traders have taken to the sidelines as they await more information that might better address one of the four major themes influencing the market right now: whether or not the Fed will taper QE3; the severity of the Chinese growth slowdown; the resiliency of the European currencies; and the state of play in Japan after the mixed election results.

Notably, both the British Pound and the Euro appear to be on the verge of technical breakouts against the US Dollar; but price action today has thus far limited the EURUSD and GBPUSD to Inside Days. After the past few days of data, it is possible that we see a revival of growth concerns now that both the UK and the US have seen weaker than expected housing data – a direct result of higher interest rates. From the beginning of May to the end of June, the US 30-year national average mortgage rate jumped from 3.43% to 4.39%, a major developing obstacle for the US economy.

If developed economies (such as the UK and the US) endure higher interest rates, it is likely that their housing markets suffer, and the economies fall back towards recession. This stands to be a major theme in the second half of 2013 and 2014. 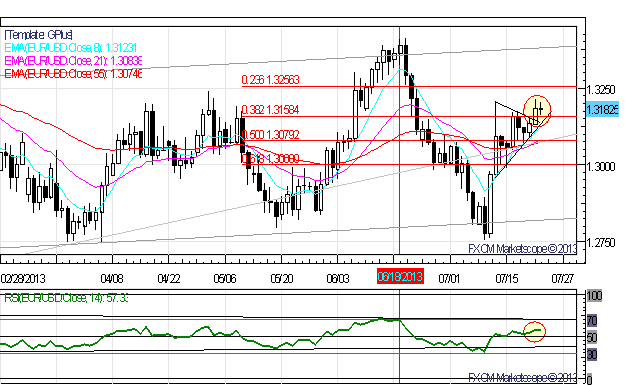 EURUSD: No change as the pair works on an Inside Day: “The path appears to be up first before down, and last week’s observation that “a break of $1.3175/245 puts 1.3300 and 1.3400/20 in focus” will come to fruition before any additional downside. Furthermore, continued failed probes below 1.3000 suggest longer-term technical bullishness that would invalidate the previously discussed Head & Shoulders pattern. Price is trading within the July 11 candle range for the seventh consecutive day, but a Bull Flag on lower timeframes (H1, H4) indicates the consolidation could end early this week.” 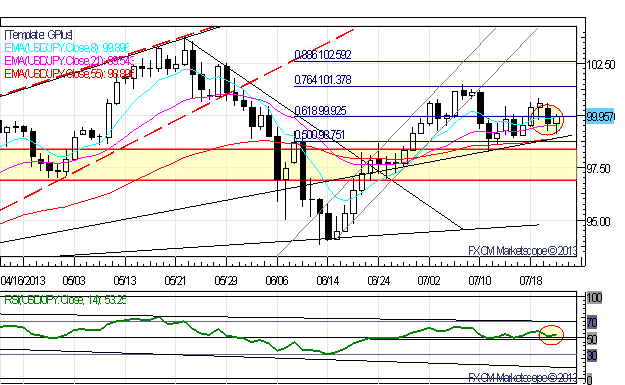 USDJPY: No change as prices have ranged the past two weeks: “The rejection of the 76.4% Fib retracement at ¥101.35/40 (May high to June low) is only a near-term setback, as the break off of the late-May to mid-June correction in the pair completed the last week of June. …longs preferred into early next week. Indeed, the 50% retracement of the June low to July high at 98.75 held as support and the pair has already bounced higher; a run at 102.00 shouldn’t be ruled out this week. A daily close below 98.75 negates this bias; a move to 97.00 would be anticipated on a reversal lower.” A potential Evening Star candle cluster (Bearish Reversal) is forming on the daily chart. 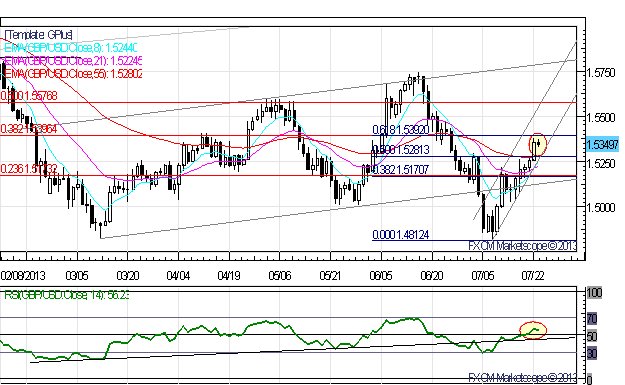 GBPUSD: No change as the pair forms an Inside Day: “Last week I said that “a rebound could see the pair back up towards $1.5390/400 (38.2% Fib yearly high/low, 61.8% Fib June high to July low), which has proven to serve as both support and resistance since April.” Indeed, the break of 1.5275/300 (former July highs) puts said level in focus higher; this would be a near-term selling point as the lower timeframes (H1, H4) become overbought in RSI and Slow Stochastics.” 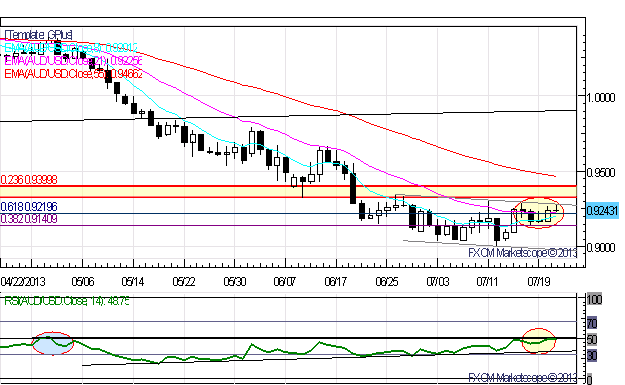 AUDUSD: No change: “Despite chopping around and through said level, the AUDUSD has more or less held the 38.2% Fibonacci retracement off the 2008 low to the 2011 high at $0.9141. While fundamentally I am long-term bearish, it is worth noting that the most readily available data shows COT positioning remains extremely short Aussie. A Bullish Broadening Wedge may be forming at the lows as a base; 0.9750/75 would be the target on a close above 0.9415.” 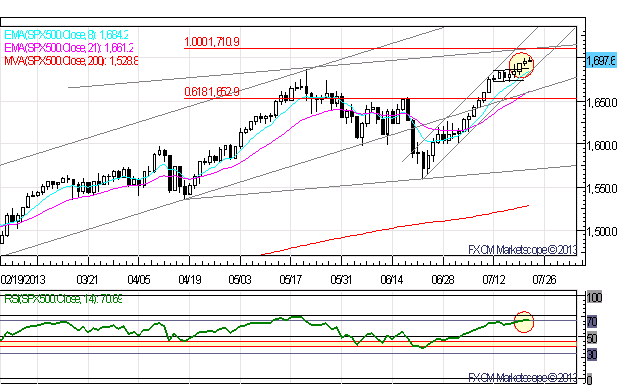 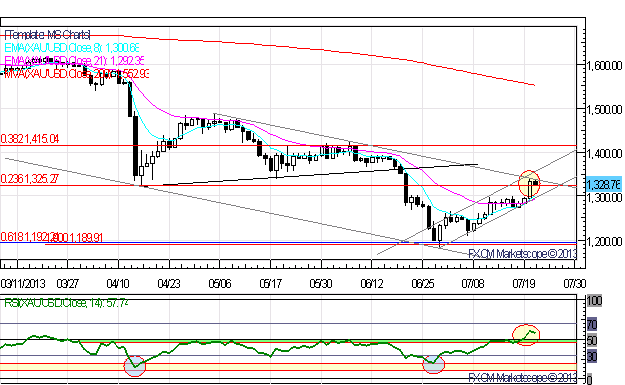