The Dow Jones FXCM Dollar Index (Ticker: USDOLLAR) has edged higher to start the week and has nearly taken back all of its losses since Wednesday, when Fed Chairman Bernanke deployed dovish rhetoric as a way of pushing US Treasury yields lower once more. With the US economy showing signs of improvement in key sectors, market participants will be watching today’s US Advance Retail Sales report for June for confirmation that gains in jobs and housing in recent weeks are reflective of improved consumption trends.

The data today is one of two key prints out of the United States before Wednesday’s fireworks, when Fed Chairman Bernanke takes to Capitol Hill for his likely last semiannual testimony in front of Congress. While today’s consumption report should show a stronger US economy, tomorrow’s inflation data – the other key report – suggests that the US economy isn’t growing fast enough to warrant a withdrawal of stimulus.

As the market tries to peg where Chairman Bernanke’s bias will lay on Wednesday, risk appetite has seen a nice boost to start the week after the 2Q’13 Chinese GDP report. Although the headline missed expectations, the annualized print of +7.5% came short of the +7.7% consensus forecast (and +7.7% model estimate), there had been growing chatter the past week or two that a print near +7.0% should be expected; needless to say, the report can be viewed as somewhat positive in that regard. Accordingly, the Australian Dollar, facing record short positioning among speculative traders, is seeing relief as well; and the AUDJPY is outperforming as a result. 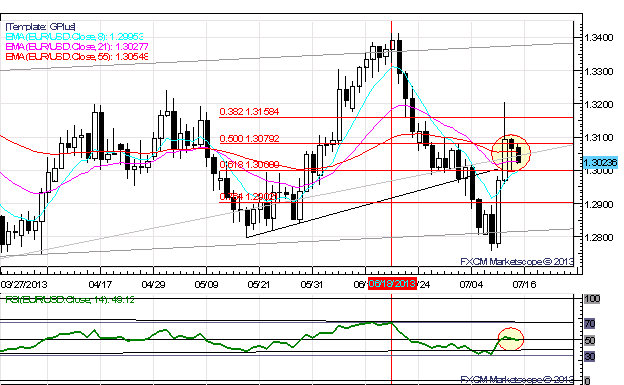 EURUSD: No change as the EURUSD holds below 50% of its Tuesday to Thursday move: “The EURUSD was flirting with a H&S breakdown but instead rebounded sharply off of the purported Neckline and achieved price over $1.3200. Today’s close is very important for sentiment headed into next week; a close below 1.3083 would signify a 50% pullback of today’s rally and set up an Inverted Hammer (bearish reversal candle). I maintain: “A [weekly] close below 1.2800 tentatively triggers the broader Head & Shoulders pattern, whose measured move points to a return to the June 2010 lows near 1.1875.”” 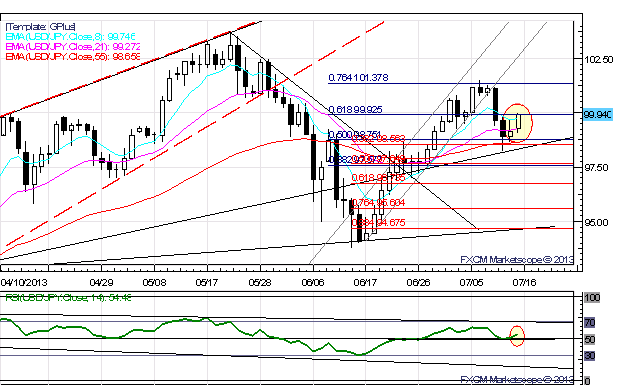 USDJPY: On Thursday I said: “The rejection of the 76.4% Fib retracement at ¥101.35/40 (May high to June low) is only a near-term setback, as the break off of the late-May to mid-June correction in the pair completed the last week of June. …longs preferred into early next week.” Indeed, the 50% retracement of the June low to July high at 98.75 held as support and the pair has already bounced higher; a run at 102.00 shouldn’t be ruled out this week. 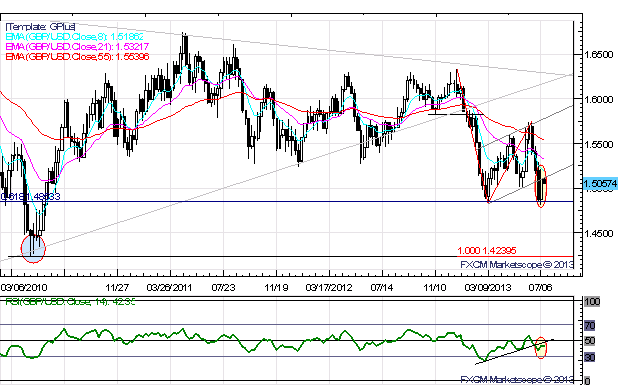 GBPUSD: No change: “Big picture: the GBPUSD broke the uptrend off of the 2009, 2010, and 2012 lows, signaling the beginning of a greater selloff towards 1.4200/50. Any rallies in the pair look to be sold; price could climb to 1.5290 (50% Fib March low to May high) on a rebound now that the GBPUSD has broken through RSI trend support off of the March 12 and May 29 lows. Price has undercut key Bear Flag support off of the March 12 and May 29 lows; and now the move towards 1.4200 appears to have begun. The rally the past [few] days has seen price trade back to the underside of the Bear Flag, and ideal selling opportunity.” 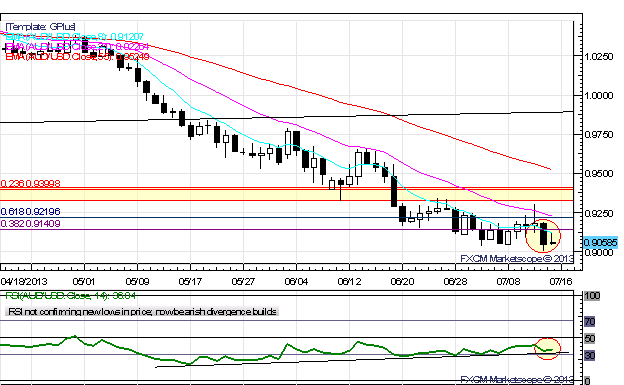 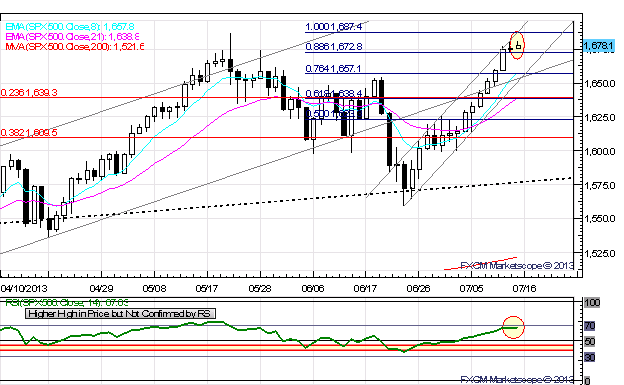 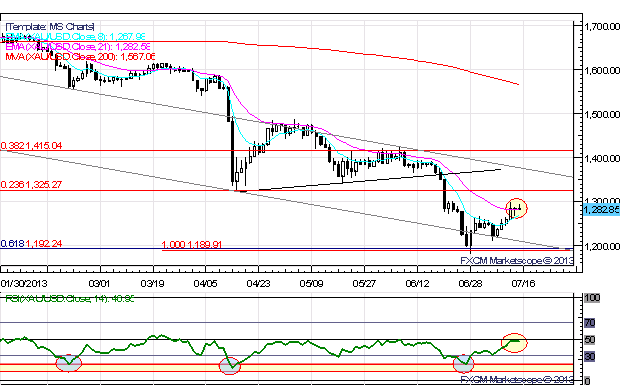