US Dollar Smashed by Fed, Bernanke; Aussie Up on Jobs, Yen on BoJ

The Dow Jones FXCM Dollar Index (Ticker: USDOLLAR) is down modestly on the day, having recovered half of its losses this week following dovish saber rattling from the Federal Reserve. Price action today has been largely dictated by what began on June 19, when the Fed suggested that it could wind down is QE3 easing program by mid-2014, given the recent improvement in the US labor market. From the low on June 19 to the yearly high set on Monday, July 8, the USDOLLAR rallied by +4.74%.

The optimism surrounding the US Dollar was dispelled quickly yesterday after the Fed’s June meeting Minutes showed the policymakers remained split over the timing of when to end QE3, and then at a policy speech after the US cash equity close when Chairman Bernanke said that tapering QE3 wouldn’t mean the Fed’s accommodative policy stance would change. This is important because it highlights the distinction between “tapering” and “tightening”: the Fed has merely indicated that it will slow, not stop, its easing measures.

It is of little surprise that the other majors, berated by the US Dollar since mid-June, have made a strong comeback. In fact, since Monday’s high, the USDOLLAR is now off by -1.69%, and was down by as much as -2.19% overnight. The Australian Dollar has posted modest gains following an improved June Australian labor market report, while the Japanese Yen has garnered favor following the Bank of Japan’s policy hold earlier today.

Read more: British Pound Plummets to Lows, but is it Too Much Too Soon? 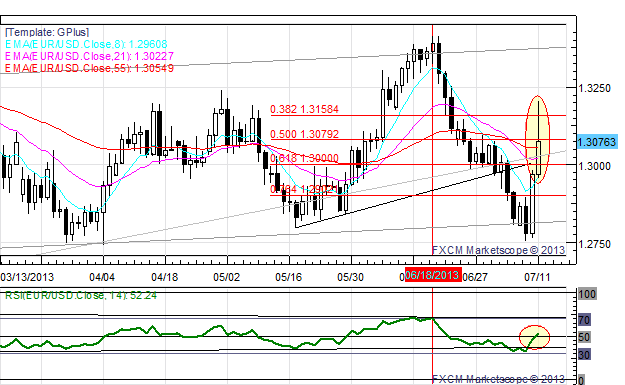 EURUSD: The EURUSD was flirting with a H&S breakdown but instead rebounded sharply off of the purported Neckline and achieved price over $1.3200. Today’s close is very important for sentiment headed into next week; a close below 1.3083 would signify a 50% pullback of today’s rally and set up an Inverted Hammer (bearish reversal candle). I maintain: “A [weekly] close below 1.2800 tentatively triggers the broader Head & Shoulders pattern, whose measured move points to a return to the June 2010 lows near 1.1875.” 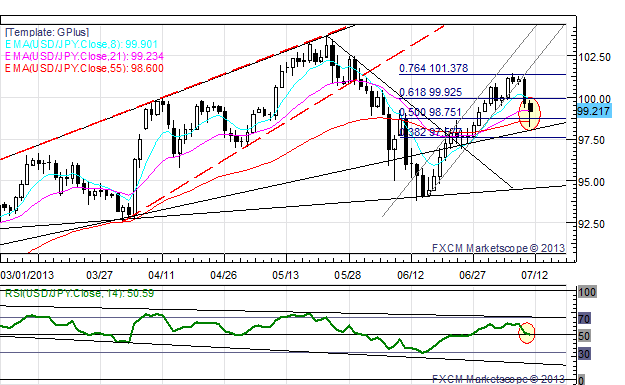 USDJPY: No change from Tuesday: “The rejection of the 76.4% Fib retracement at ¥101.35/40 (May high to June low) is only a near-term setback, as the break off of the late-May to mid-June correction in the pair completed the last week of June. Furthermore, a run to RSI resistance should be accompanied by price accompanying higher towards 102.40/60. Looking to buy dips as long as 99.00/25 is held.” An Inverted Hammer today with a close above 99.00/25 would suggest longs preferred into early next week. 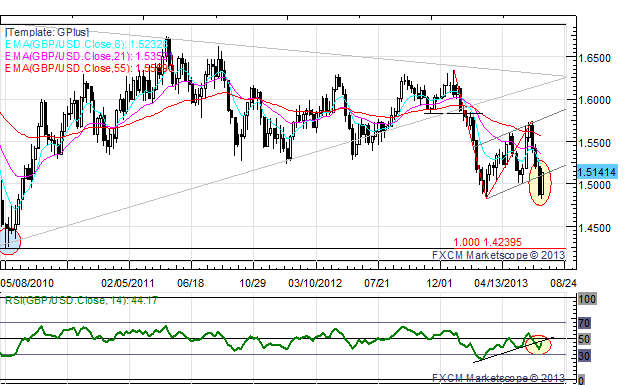 GBPUSD: No change: “Big picture: the GBPUSD broke the uptrend off of the 2009, 2010, and 2012 lows, signaling the beginning of a greater selloff towards 1.4200/50. Any rallies in the pair look to be sold; price could climb to 1.5290 (50% Fib March low to May high) on a rebound now that the GBPUSD has broken through RSI trend support off of the March 12 and May 29 lows. Price has undercut key Bear Flag support off of the March 12 and May 29 lows; and now the move towards 1.4200 appears to have begun.” The rally the past two days has seen price trade back to the underside of the Bear Flag, and ideal selling opportunity. 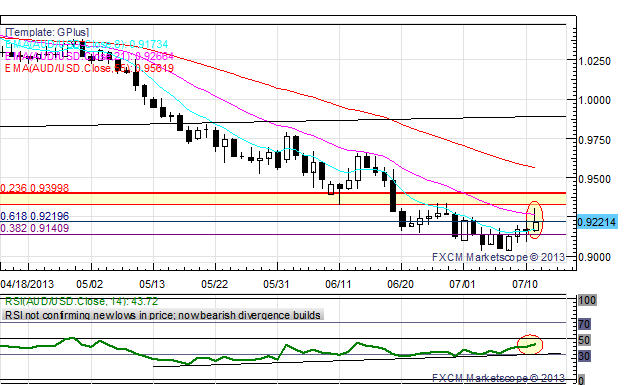 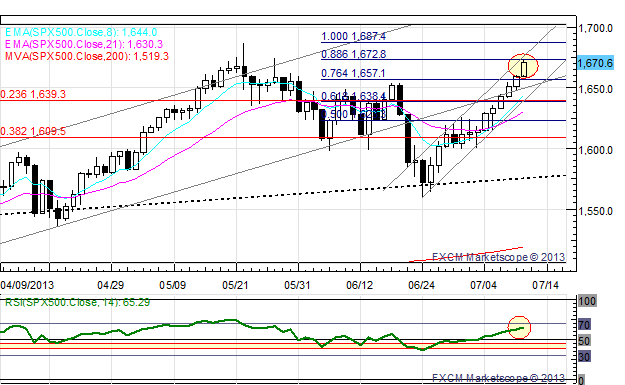 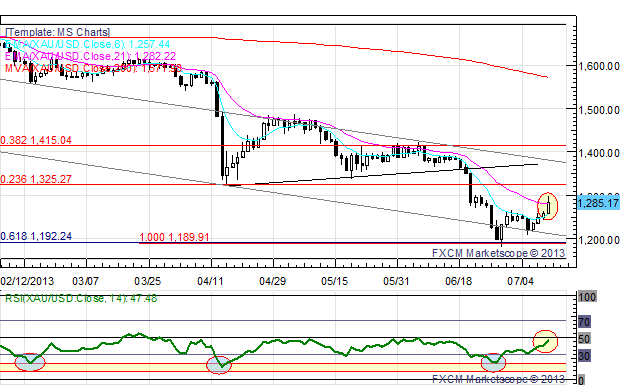