Political issues haven’t been a main driver of Euro weakness in the past several months, with the Greek elections and Spanish bank bailout last June being perhaps the last major political issues to truly have an influence. One country that’s been largely overlooked the past few years, Portugal, now presents the greatest near-term threat to the Euro, as an upheaval in the government – two ministers resigned – now threatens the country’s bailout package.

Notably, the Portuguese 10-year note yield topped 8.100% for the first time since November, and the 2-year note yield had soared by over +100-bps at the time this report was written. Certainly, with snap elections possible around the corner, the renewed uncertainty has presented itself as a fresh bearish catalyst for the Euro.

Any Euro weakness may be short-lived surrounding Portugal, however, as a favorable election outcome (we’ve yet to see an anti-bailout candidate take power in a significant Euro-using country) would provoke investors to reverse recent selling of Portuguese debt; these concerns may be transitory once a new government is in place. With the European Central Bank policy meeting tomorrow, volatility around the Euro is likely to remain high; and if the ECB introduces any new dovish policy measures, the Euro could easily slide further against the Japanese Yen and the US Dollar in the near-term, with the EURJPY having fallen under ¥129.00 and the EURUSD having fallen under $1.3000 overnight. 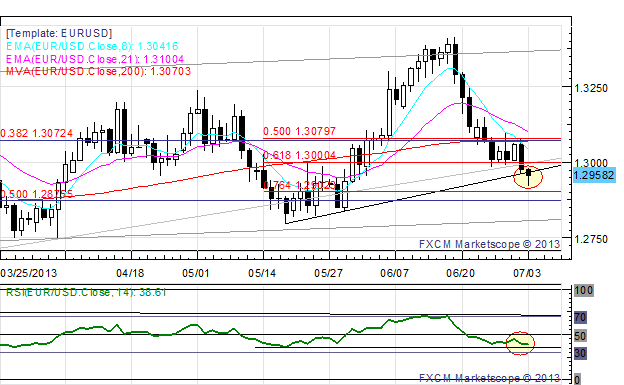 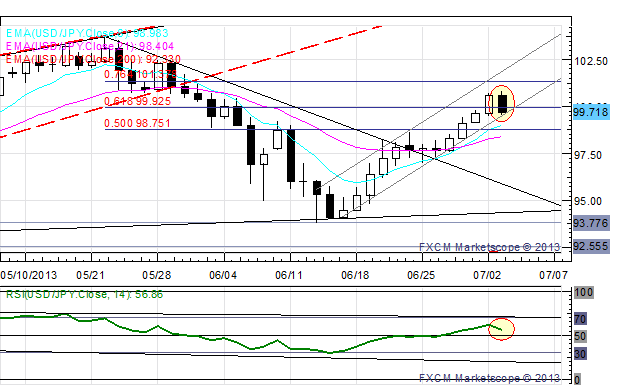 USDJPY: No change: “Price has unfolded as expected, having noted earlier “a near-term bullish bias is warranted as long as price holds 96.65/80; a medium-term bearish bias is warranted as long as price holds 99.25/35.” With 99.25/35 broken, the technical structure shifts medium-term bullish so long as 96.75 holds lower. Ultimately, now that the downtrend from the May 22 has been broken, the Symmetrical Triangle suggests a continuation towards 99.80/100.00 and 100.40/75.” The bullish bias may be broken today on a close under 99.49, as a Bearish Key Reversal would be in place. 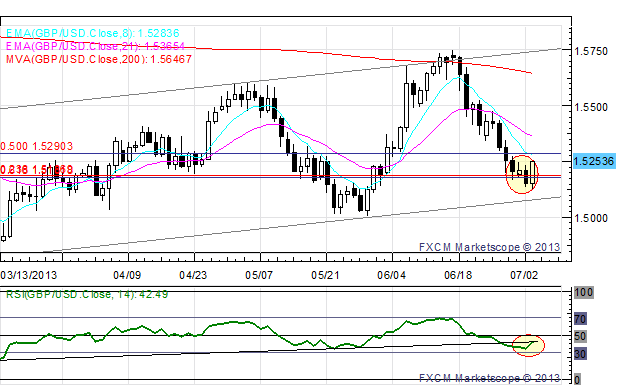 GBPUSD: No change: “Overall, the pair is trading back to support in an ascending channel off of the March 12 and May 29 lows; a test of 1.5100 is called for over the coming weeks. Further US Dollar strength is contingent upon sentiment remaining that the Fed will taper QE3, and the more evidence that builds on the fundamental side, the greater the probability that the ascending channel that has guided price the past three months is only a Bear Flag. Big picture: the GBPUSD broke the uptrend off of the 2009, 2010, and 2012 lows, signaling the beginning of a greater selloff towards 1.4200. Any rallies in the pair look to be sold; price could climb to 1.5290 (50% Fib March low to May high) on a rebound now that the GBPUSD has broken through RSI trend support off of the March 12 and May 29 lows.” 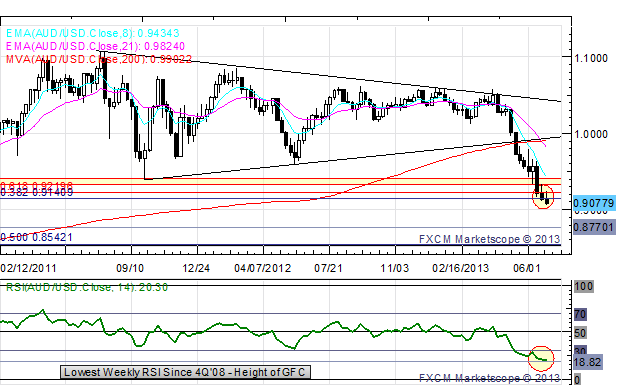 AUDUSD: No change: “Fresh selling has provoked an even steeper decline in the AUDUSD, with the pair falling towards the 38.2% Fibonacci retracement off the 2008 low to the 2011 high at $0.9141. While fundamentally I am long-term bearish, it is worth noting that the most readily available data shows COT positioning remains extremely short Aussie.” Bullish divergence on the daily chart has formed once more, suggesting that consolidation or perhaps a small rally back towards 0.9330/420 is due; or another quick, sharp drop is necessary to clear the technical discrepancy. 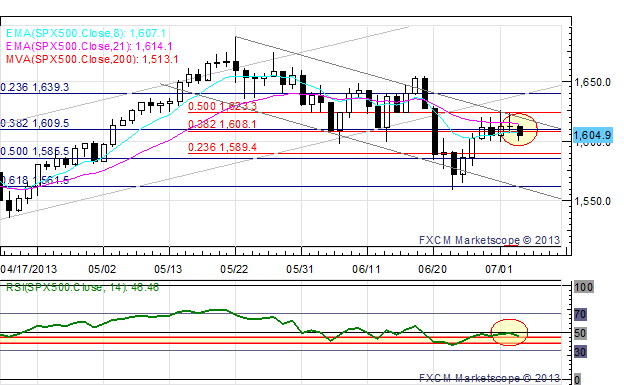 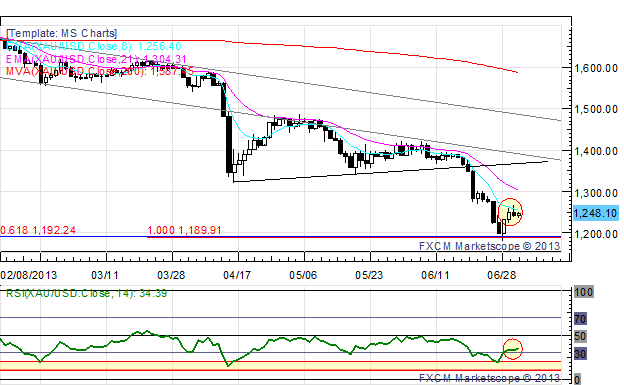 GOLD: No change “Gold has fallen into the 10/20 RSI support region, where price has held on numerous probes lower ultimately producing a short-term rally. More recently, daily RSI has only dipped into this region in mid-February and mid-April…Basing just below $1200/oz shouldn’t be dismissed, as at 1189.91 lies the 100% extension of March high/April low/April high move, as well as the 61.8% extension of the October high (post-QE3 announcement)/April low/April high move at 1192.” It should be noted that the rally off of Friday’s low has produced a maximum of +7.36% so far, eclipsing the rebound seen from late-May to early-June, when Gold rebounded by +6.36%.