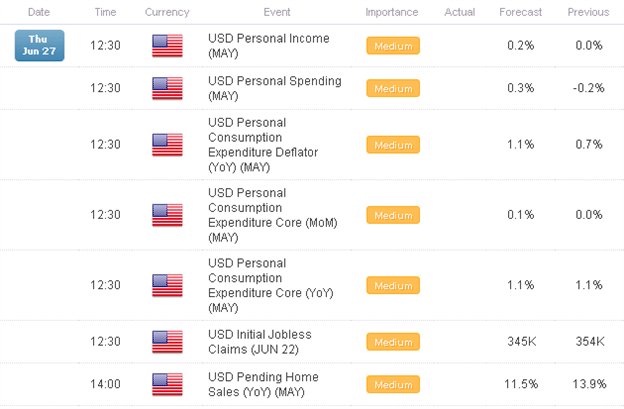 The Dow Jones FXCM Dollar Index (Ticker: USDOLLAR) is on pace for its eighth close higher out of the past nine sessions, but price action the past few days can be characterized as nothing more than a consolidation aptly mirroring investor sentiment. Since last Wednesday when the Federal Reserve announced its intention to have fully tapered QE3 by mid-2014 (likely June), asset classes around the globe have been roiled by indecision given the sweeping implications of any Fed wind down and its impact on interest rates.

In fact, those asset classes that have suffered the greatest losses since May 22, when Fed Chairman Bernanke first offered his taper talk, can be presumed to be high risk investments without the support of QE. In particular, European peripheral debt was hit quite hard in the run up to and after the Fed’s meeting, as investors positioned themselves for a world with less liquidity.

Building on yesterday’s comments from European Central Bank President Mario Draghi, who said that that ECB policy would “stay accommodative for the foreseeable future” and that the ECB has “an open mind about all other possible instruments that we may consider proper to adopt,” several other ECB officials have been on the wires (Asmussen, Noyer, Knot stick out) reassuring markets that the ECB’s liquidity efforts are here to stay – beyond the foreseeable future. Usually, dovish rhetoric from policymakers tends to weaken the currency; however in the case of the Euro, because the commentary has been used to drive down peripheral bond yields, the Euro has benefited. 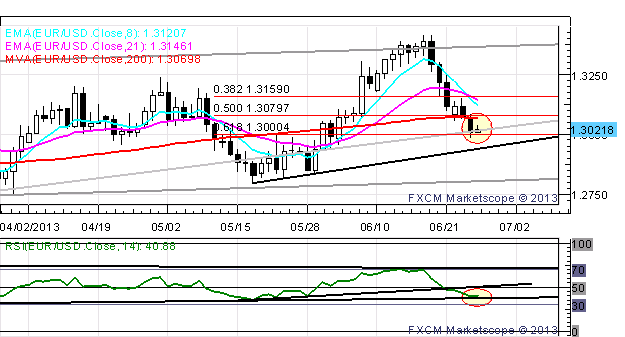 EURUSD: The EURUSD sliced through support at $1.3070/80 (38.2% Fib July 2012 low to February 2013 high, 50% Fib April low to June high) easily yesterday, and now finds itself at the 61.8% Fibonacci retracement of the April low to the June high at 1.3000. The psychologically significant figure serves as a reasonable area to look for a short-term low, further suggested by the daily RSI falling to trend support (February 25 and May 17 RSI lows). 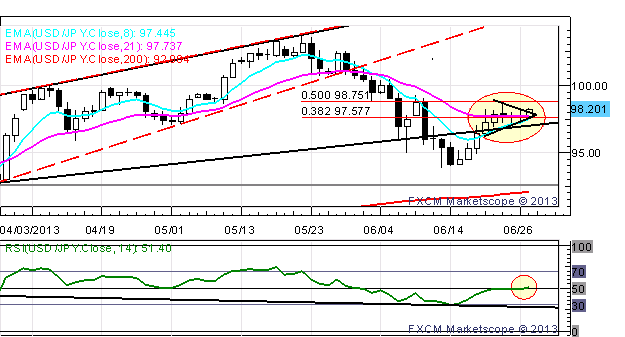 USDJPY: “The beginning of June yielded the start of a Bearish Broadening Wedge (off of the February 25 and April 4 lows), but near-term bullish momentum has signaled a false breakout now that the USDJPY rests above the wedge’s support, at ¥96.75/7.00 today. Although the USDJPY broke the RSI downtrend last week, near-term divergence has formed as the rally has seen RSI take out prior swing highs without the same occurring in price, as the pair has failed to achieve the 50% Fib retracement from the May high to the June low – the same occurred after the first major June low was set on June 7 (price rallied to 99.28, 50% at 99.35; now price has rallied to 98.70, 50% at 98.76). The 98.70 high this week also comes in below 98.80 (38.2% Fib February low to May high.” 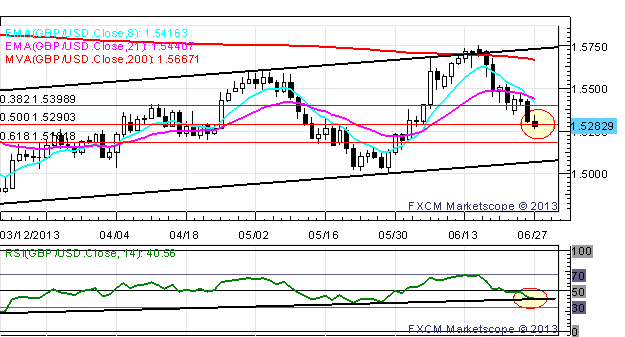 GBPUSD: No change: “The GBPUSD has traded in a slight ascending channel off of the March 14 and May 29 lows (parallel to May 1 high), and the conflux of the 200-SMA and said channel resistance just under $1.5750 provoked a pushback midweek. Now, price finds itself at the 38.2% Fibonacci retracement of the January high to March low as well as the March low to May high. With US yields rallying, the USD component of this pair looks well-supported, and any rallies seen in the coming days are viewed as selling opportunities. 1.5230 is the first big support lower. Big picture: the GBPUSD broke the uptrend off of the 2009, 2010, and 2012 lows, signaling the beginning of a greater selloff towards 1.4200. Any rallies in the pair look to be sold; price could climb to 1.5530/35 (23.6% Fib March low to May high) before the next leg lower begins.” 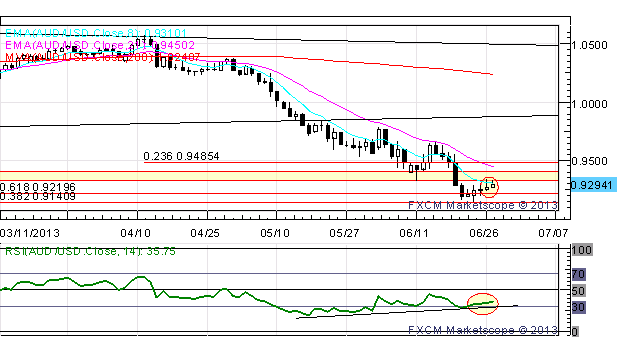 AUDUSD: No change: “Bullish RSI divergence on the daily chart (price sets new lows but momentum fails to keep pace) suggests that the selloff may be exhausted in the near-term. However, given the scope of recent declines – over 1200-pips in ten weeks – it’s evident that a new paradigm is guiding the AUDUSD. As such, we prefer selling rallies in the pair but note that a major support zone at $0.9140/220 (38.2% Fib October 2008 low to July 2011 high, 61.8% Fib March 2010 low to July 2011 high) will require new catalysts for a break. On bounces during the downtrend since April 11, the AUDUSD has often traded back towards the 23.6% from the April high to the low at the time before turning. In this case, that would suggest breaking former June lows at 0.9320/30 before 0.9485/90 (23.6% Fib April high to June low).” 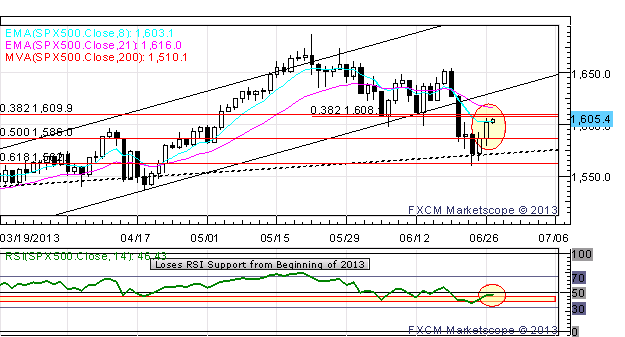 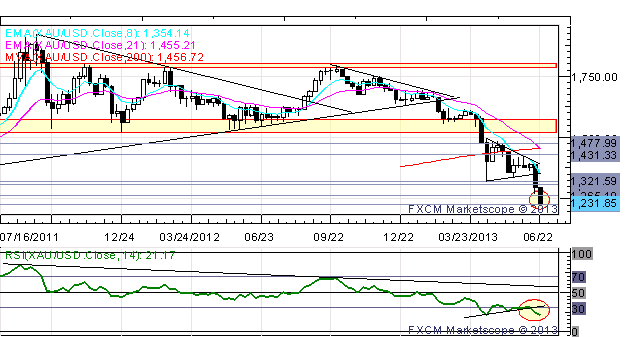 GOLD: No change: “If the US Dollar turns around, however (as many of the techs are starting to point to), then Gold will have a difficult gaining momentum higher. Indeed this has been the case, with Gold failing to reclaim the 61.8% Fibonacci retracement of the April meltdown at $1487.65, only peaking above it by 35 cents for a moment a few weeks ago.” This has played out, with fresh yearly lows at 1228.42 today, and pressure remains biased for a move lower so long as US yields remain elevated.