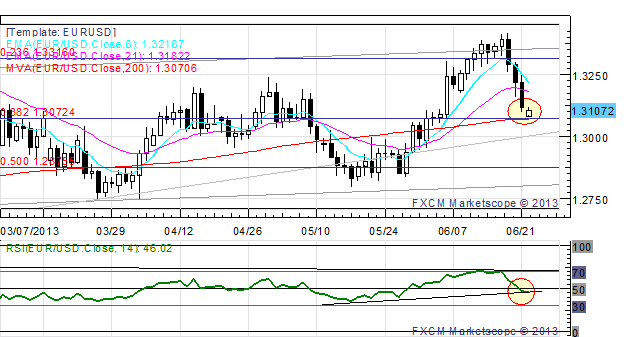 After a violent close to the week across all asset classes, not just FX, the last full week of June has opened up with more of a whimper than a bang, although the same themes that closed last week have continued thus far. Accordingly, the US Dollar remains the top performer amid higher US Treasury yields, with the 10-year yield hitting 2.632% today, the highest level since August 4, 2011 – the day before Standard & Poor’s stripped the US of its ‘AAA’ credit rating.

Needless to say, global markets have come a long way since the summer of 2011, yet price action in FX today is eerily similar to that seen at the beginning of the Euro-zone crisis spiral that consumer the better part of the past two years. Three of the more berated currencies during this time frame, the Japanese Yen (‘Abenomics’), the Swiss Franc (the SNB’s EURCHF floor at Sf1.2000), and the US Dollar (the Fed’s massive balance sheet expansion and suppression of yields) are leading the pack as signs of crisis renewed begin to creep back into the foreground. Certainly, with the non-safe haven European currencies as well as the commodity currency bloc (high yield FX) sliding further today, we are inclined to believe that global market participants are starting to feel a bit uneasy.

Certainly, this week will be quieter than the past few, with little significant data on the docket, although there is potentially market moving data out from Germany, Japan, and the US between Tuesday and Thursday. Outside of these key events, we suspect that the coming days will continued to be shaped by speculation over the Fed’s QE3 taper talk, which has hit Gold and other risk-correlated assets significantly.

There are no significant data due during the North American session on Monday, June 24.

EURUSD: The past few weeks week I’ve been suggesting that a Right Shoulder on a Head & Shoulders formation, dating back to September 2013, might be forming with implications for a retest of the June 2010 low near $1.1875. The FOMC decision provided the necessary catalyst for a turn near 1.3400. The EURUSD now finds itself below the formerly key 1.3185/45 zone, which produced highs in mid-April and late-May, before breaking in the first week of June. Support has been found at 1.3070/75, the 200-SMA and the 38.2% Fibonacci retracement (July 2012 low to February 2013 high). I continue to favor shorts, as evidence of a return of the Euro-zone crisis is building. 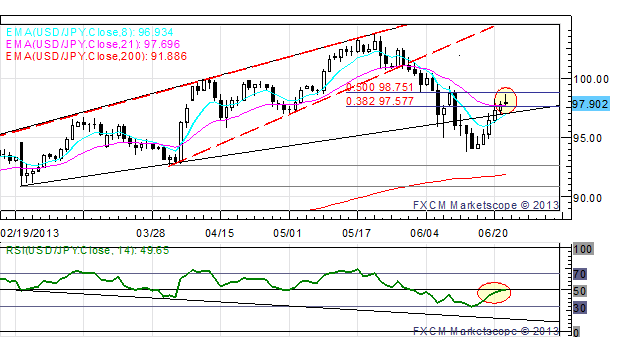 USDJPY: Although price has maintained the 38.2% Fibonacci retracement (May 22 high to June 7 low) at ¥97.58, constructive price action into 99.25/35 has yet to develop as a number of the JPY-crosses have seen Inverted Hammers or Dojis (topping candles) form on daily timeframes. Undoubtedly, this is a result of the global shift to safety; the USDJPY typically struggles when US equity markets do. Until global equity markets stabilize and US yields begin to rally further, it is too early to declare the reaction in risk assets finished, and therefore, it is too early to declare the USDJPY’s slide since late-May complete either. At this juncture, only a break of 99.25/35, the June high and the 50% retracement of the May 22/June 7 high/low, will negate the bearish bias in the pair. Until said level is broken, shorts are eyed into 95.25/35, 93.75/85, and 92.55 (pre-BoJ QE announcement low in April). 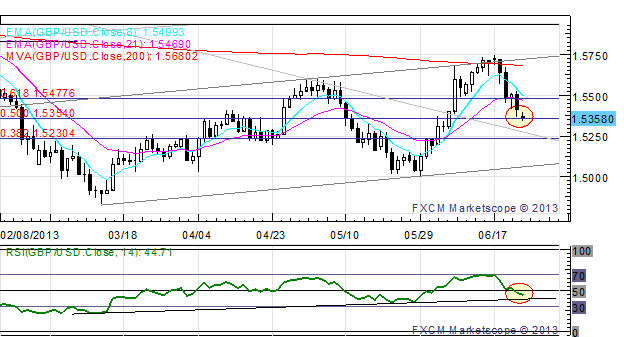 GBPUSD: The GBPUSD has traded in a slight ascending channel off of the March 14 and May 29 lows (parallel to May 1 high), and the conflux of the 200-SMA and said channel resistance just under $1.5750 provoked a pushback midweek. Now, price finds itself at the 50% Fibonacci retracement of the February high to the March low at 1.5354, as well as underneath the 38.2% Fibo of the yearly high/low at 1.5405/10. With US yields rallying, the USD component of this pair looks well-supported, and any rallies seen in the coming days are viewed as selling opportunities. 1.5230 is the first big support lower. 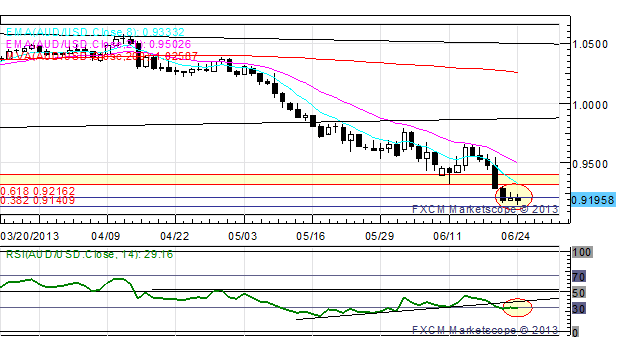 AUDUSD: No change: “Fresh selling has provoked an even steeper decline in the AUDUSD, with the pair falling towards the 38.2% Fibonacci retracement off the 2008 low to the 2011 high at $0.9141. While fundamentally I am long-term bearish, it is worth noting that the most readily available data shows COT positioning remains extremely short Aussie.” 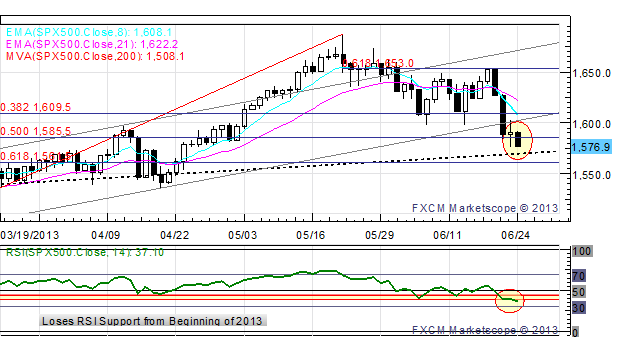 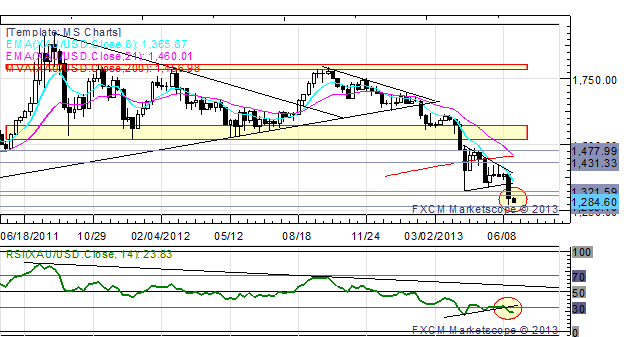 GOLD: No change: “If the US Dollar turns around, however (as many of the techs are starting to point to), then Gold will have a difficult gaining momentum higher. Indeed this has been the case, with Gold failing to reclaim the 61.8% Fibonacci retracement of the April meltdown at $1487.65, only peaking above it by 35 cents for a moment a few weeks ago.” This has played out, with fresh yearly lows at 1269.45 last week, and pressure remains biased for a move lower so long as US yields remain elevated.