First, a mea culpa. The past several days I’ve been suggesting that the Federal Reserve wouldn’t cut its QE3 program down from the current $85B/month pace its currently pursuing. This idea had three roots: inflation, both core and headline, remain well-below the Fed’s +2% y/y medium-term target and the +2.5% y/y circuit breaker per “The Evan’s Rule”; the Unemployment Rate remains above the 6.5% circuit breaker; and NFP growth is below +200K on the headline, three-, six-, and 12-month trends. To me, these factors should have contributed to the idea that the Fed would stay in the market. So far, so good.

The err in judgment, however, was underappreciating the Fed’s desire to wind down its QE3 program, a chord that has been struck around the globe today as equity markets in Asia and Europe (as well as North American futures) have been scorned, while European bond markets are under intense fire. There’s one line in particular from the Fed’s policy statement that has spurred taper speculation – “The Committee sees the downside risks to the outlook for the economy and the labor market as having diminished since the fall” – which spurs the belief that a few more months of even modest labor market growth will be enough for the Fed to call it quits on QE3.

With the bar lowered on the Unemployment threshold necessary to warrant a Fed exit, investors have jettisoned US Treasuries overnight, sending the 10-year note yield above 2.400% at the time of writing, the highest rate since October 2011. Likewise, turmoil has enveloped emerging markets, the commodity currencies have hit fresh lows against the safe havens (CHF, JPY, USD) once more, and there’s now the potential for a deeper pullback in risk assets globally – not just today by any stretch of the imagination. US labor market data is paramount going forward, starting with Initial Jobless Claims (JUN 15) today. 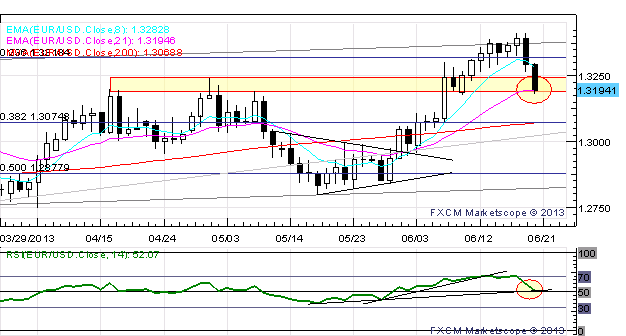 EURUSD: The past week I’ve been suggesting that a Right Shoulder on a Head & Shoulders formation, dating back to September 2013, might be forming with implications for a retest of the June 2010 low near $1.1875. After six gut wrenching days of nearly seeing the pattern nullified in the near-term, the FOMC decision provided the necessary catalyst for a turn. The EURUSD now finds itself back in the formerly key 1.3185/45 zone, which produced highs in mid-April and late-May, before breaking in the first week of June. Support is thus here now, alongside the 21-EMA at 1.3195. A deeper pullback eyes 1.3075. 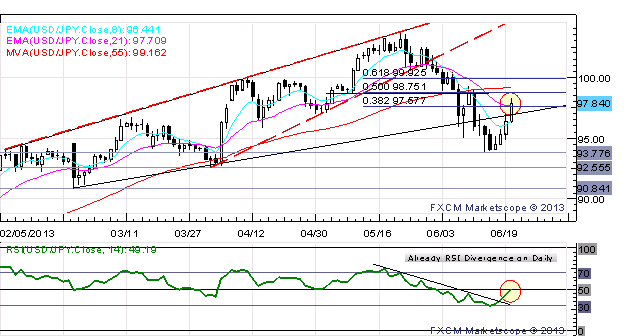 USDJPY: While I’ve been looking for a bearish scenario, I previously noted: “the USDJPY is close to breaking out of the daily RSI downtrend in place since May 17, suggesting a turn may be on the horizon.” This fringe observation proved to be correct, given the outcome of the Fed meeting, and the USDJPY has happily surged alongside rising US Treasury yields. A close above the 38.2% Fibonacci retracement (May 22 high to June 7 low) at ¥97.58 would be viewed as constructive into 99.25/35. 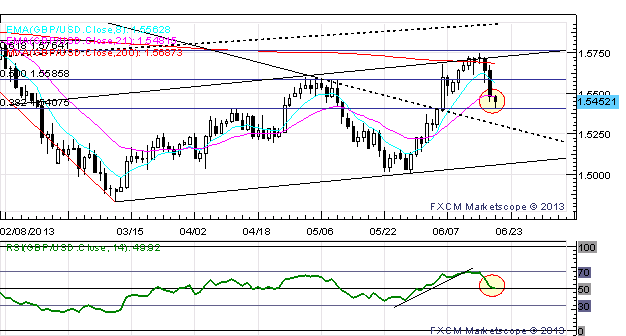 GBPUSD: Earlier this week I said: “The pair is attempting to crack the 200-SMA at $1.5700 again, after several rejections last week and the week before. Once more, the GBPUSD finds itself in a state trepidation as it makes little headway above the key moving average, as the daily RSI breaks its late-May/early-June uptrend at the top rail of the ascending channel off of the March and May lows (drawn to the early-May high). In terms of daily RSI, the uptrend has broken before achieving overbought conditions, suggesting that a near-term top may be in place.” Price has fallen back to the 38.2% Fibonacci retracement of the year high/low at1.5408, meaning that we may yet see momentum slow in the short-term. 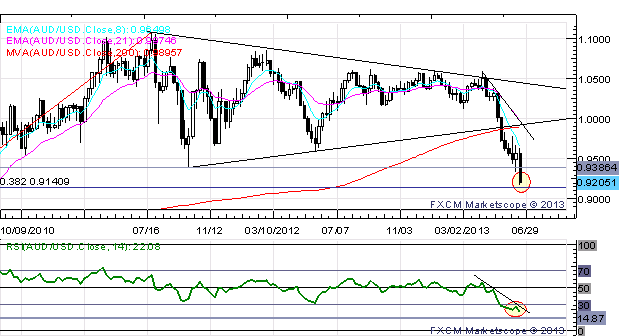 AUDUSD: Fresh selling has provoked an even steeper decline in the AUDUSD, with the pair falling towards the 38.2% Fibonacci retracement off the 2008 low to the 2011 high at $0.9141. While fundamentally I am long-term bearish, it is worth noting that the most readily available data shows COT positioning remains extremely short Aussie. 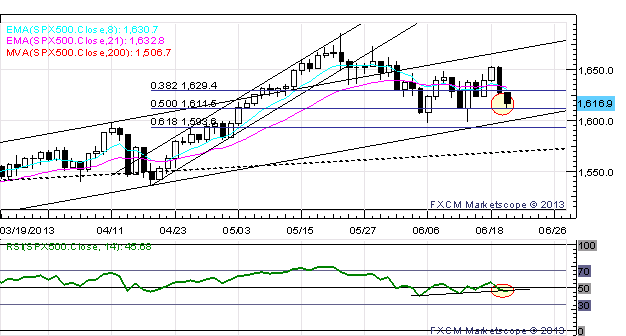 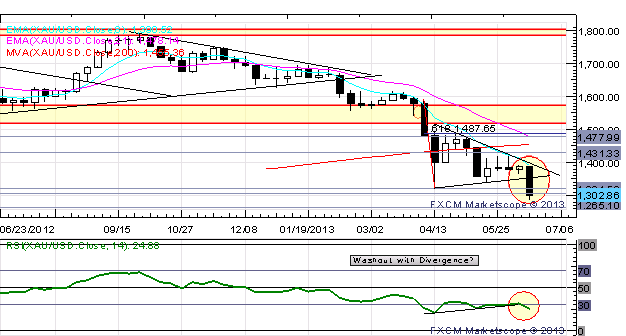