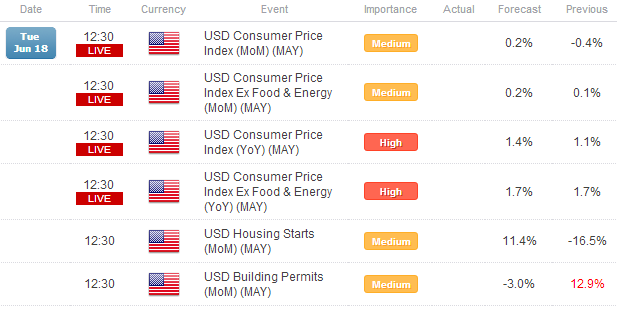 After yesterday’s slightly Bullish Engulfing pattern, alongside the USDJPY’s Double Inside Day pivot, the Dow Jones FXCM Dollar Index (Ticker: USDOLLAR) has broken loose of its recent downtrend, adding nearly half a percent thus far on Tuesday as market participants recalibrate their portfolios for tomorrow’s Federal Reserve Rate Decision. Of note, the Euro is quite resilient among the components of the USDOLLAR Index, posting meager gains against the world’s reserve currency that are seemingly lost among the Australian Dollar, British Pound, and Japanese Yen.

On the British Pound: both headline and core inflation figures were above forecast at +2.7% y/y and +2.2% y/y (versus +2.6% y/y and +2.1% y/y expected, respectively), and while these data would normally provoke a bullish response by the Sterling, the PPI data released earlier has had a more apparent impact. The factory gate price data showed unexpected deflation on both the Input and Output readings, and has served as a strong enough counterweight to see the GBPUSD rejected at key technical resistance (see below).

On the Japanese Yen: the Bank of Japan released estimates that showed the current account balance widened to an all-time record amid the monumental easing measures implemented under ‘Abenomics’ and the Kuroda regime. Certainly, the disappointing Japanese trade balance figures last night lend to the notion that the economy’s problems are deeper rooted than just a strong currency – perhaps this is a bit of the “J curve” at work (when an economy whose currency weakens sees its trade deficit widen at first, then narrow), but in any case, if Japanese exporters continue to struggle, we should expect more from ‘Abenomics.’ 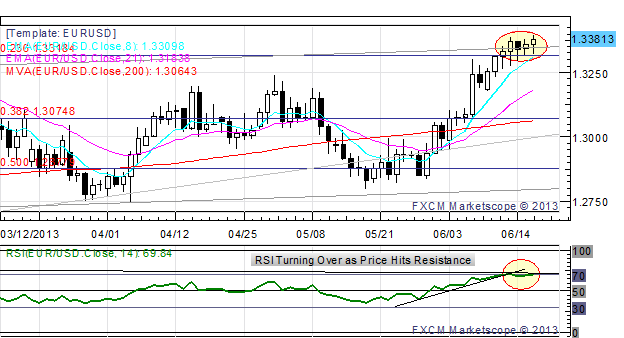 EURUSD: No change: “The pair has traded into Right Shoulder resistance in a potential Head & Shoulders pattern dating back to the September 2012 high (post-QE3 announcement), and the two overshoots on Wednesday and Thursday into $1.3400 have been rejected. Accordingly, a Bearish Key Reversal on the [Thursday, June 13] 4H timeframe (01:00 EDT to 05:00 EDT candle) gives an excellent reference points for shorts, as the period high coincides with the mid-January swing high at 1.3400/05. I maintain: ‘Considered in context of (1) the USDCHF failing to set a new monthly low as the EURUSD set a new monthly high today and (2) the EURJPY reversing sharply off of [¥128.00], there is evidence building that a turn may be coming.’” The grind higher continues, and with new monthly highs set after a failed swing lower, it appears that the EURUSD may be coiling now for a breakout higher – I’ve reduced my positioning by half am tentatively considering to cut entirely ahead of tomorrow’s FOMC. 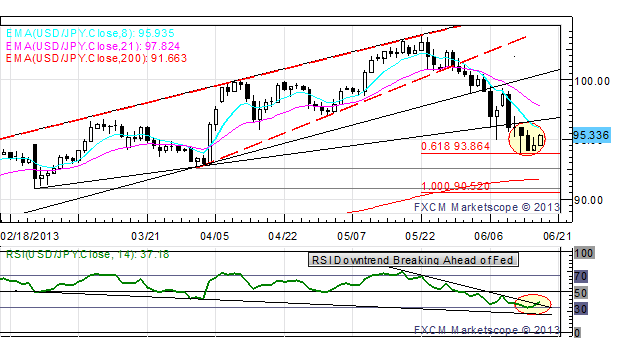 USDJPY: No change: “With US Treasury yields [near] their highest level in 16-months and the USDJPY sinking, there is probably trouble ahead (I don’t think Fed begins a significant QE3 taper in June; thus yields fall as bond prices move up, weighing on USDJPY). There are two major bearish patterns in play right now: a Bearish Rising Wedge; and a Bearish Broadening Wedge. The Bearish Rising Wedge was initiated on May 30, and the measured move calls for a return to the base at 92.55. The Bearish Broadening Wedge, initiated yesterday, calls for a move back to the base near 90.84. Accordingly, in context of retail traders adding to their USDJPY longs, we find that the combination of sentiment and technicals offers a favorable opportunity for continued losses.” Of note: the USDJPY is close to breaking out of the daily RSI downtrend in place since May 17, suggesting a turn may be on the horizon. 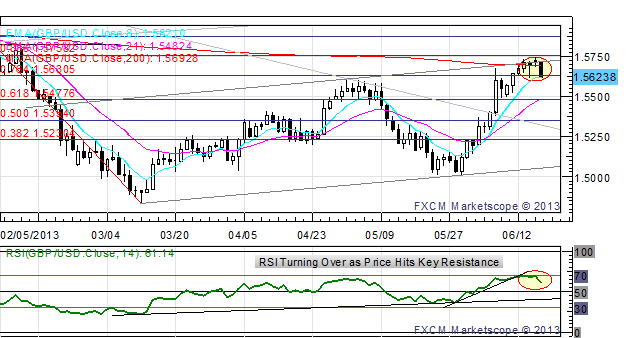 GBPUSD: Yesterday I said: “The pair is attempting to crack the 200-SMA at $1.5700 again, after several rejections last week and the week before. Once more, the GBPUSD finds itself in a state trepidation as it makes little headway above the key moving average, as the daily RSI breaks its late-May/early-June uptrend at the top rail of the ascending channel off of the March and May lows (drawn to the early-May high). In terms of daily RSI, the uptrend has broken before achieving overbought conditions, suggesting that a near-term top may be in place.” Today, price has failed dramatically above its 200-SMA, falling back to the 8-EMA for the first time since June 3. However, losses may slow at this point, as price has fallen into the late-April swing highs 1.5590/610. 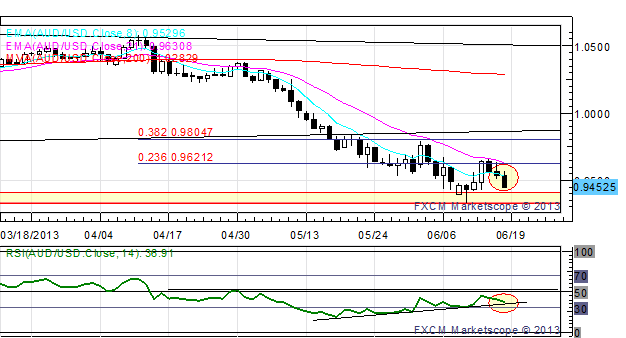 AUDUSD: Yesterday I said: “The AUDUSD has failed to achieve a close above the 21-EMA since April 30 suggesting that selling pressure remains firm. Finally, with the bullish daily RSI divergence having been mostly resolved at this point in time as well, the last bout of AUDUSD strength may arrive this week.” While the AUDUSD was positive at the time of writing yesterday, failure at the 21-EMA and the 23.6% Fibonacci retracement from the April 11 high to the June 11 low at $0.9621 capped the bounce, and now the pair finds itself back in the pivotal 0.9325/410 zone, major support/resistance in November 2009, April 2010, and October 2011. Note: COT positioning remains extremely short Aussie. 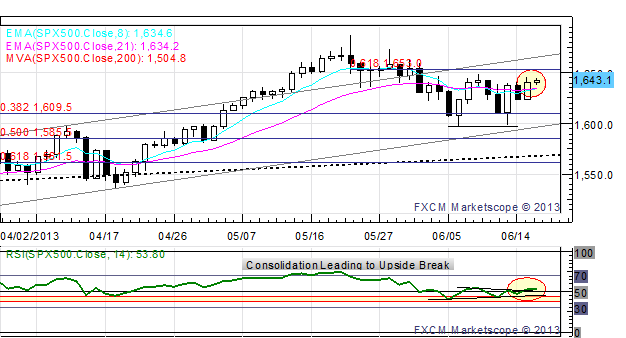 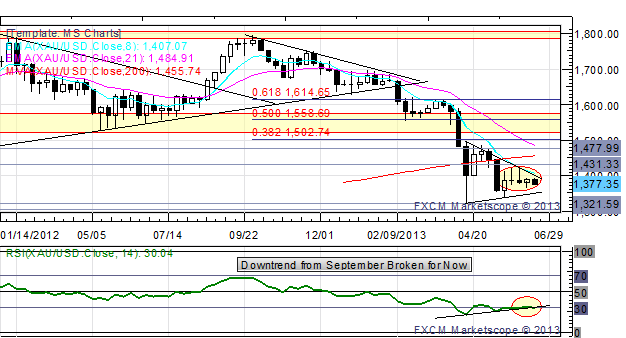