The Dow Jones FXCM Dollar Index (Ticker: USDOLLAR) is working on its second consecutive Inside Day today, and only its fourth positive day over the past fourteen, as investors have hit the brakes on recent volatility ahead of the Federal Reserve’s June policy meeting this Wednesday. Of the components of the USDOLLAR Index, the weak Japanese Yen (spurred by higher Japanese equity markets to start the week) is offsetting the stronger Australian Dollar, though for the latter, it appears that short covering due to overcrowded market positioning – not a materially positive shift in the fundamentals – is spurring strength out of the commodity currency bloc.

Overall, however, there’s a certain “calm before the storm” feeling afoot right now, and the JPMorgan Global FX Volatility Index has plummeted by -9.80% from its yearly high set on Thursday, confirming the downswing in short-term fear. Nevertheless, the fact that FX volatility measures have been elevated near their highest level since June 2012, when global markets reached their apex of concern over the European sovereign debt crisis, before the Fed’s QE3 was announced or the ECB had promised to do “whatever it takes” to save the Euro.

With respect the Fed Rate Decision on Wednesday, there’s been increased chatter in recent days that a small taper could occur, somewhere in the neighborhood of $5B, if only for the Fed to test the resolve of markets. However, the Fed’s stated circuit breaker for QE3, “The Evan’s Rule,” isn’t close to either of its circuit breakers being hit: an Unemployment Rate of 6.5%; or yearly inflation gauges exceeding +2.5%. Thus, the recent uptick in US Treasury yields may be a mispricing of a larger QE3 taper. Considering how US financial assets have behaved recently – a weaker US Dollar, weaker US Treasuries, weaker US equities – there is room for further substantial dislocation this week. 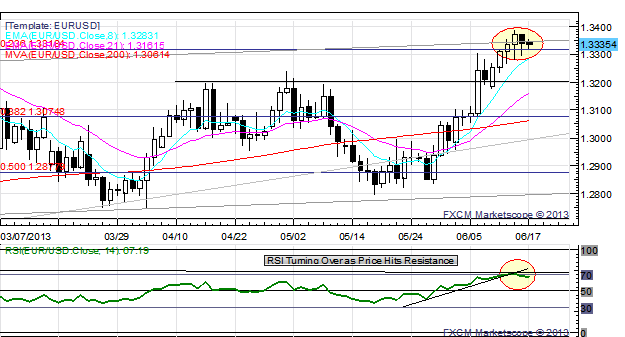 EURUSD: No change: “The pair has traded into Right Shoulder resistance in a potential Head & Shoulders pattern dating back to the September 2012 high (post-QE3 announcement), and the two overshoots on Wednesday and Thursday into $1.3400 have been rejected. Accordingly, a Bearish Key Reversal on the [Thursday, June 13] 4H timeframe (01:00 EDT to 05:00 EDT candle) gives an excellent reference points for shorts, as the period high coincides with the mid-January swing high at 1.3400/05. I maintain: ‘Considered in context of (1) the USDCHF failing to set a new monthly low as the EURUSD set a new monthly high today and (2) the EURJPY reversing sharply off of [¥128.00], there is evidence building that a turn may be coming.’” 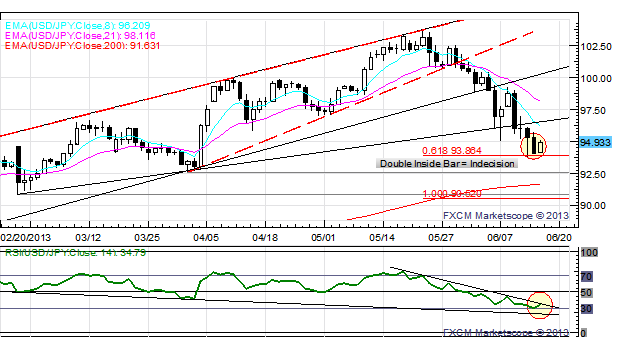 USDJPY: No change: “With US Treasury yields [near] their highest level in 16-months and the USDJPY sinking, there is probably trouble ahead (I don’t think Fed begins a significant QE3 taper in June; thus yields fall as bond prices move up, weighing on USDJPY). There are two major bearish patterns in play right now: a Bearish Rising Wedge; and a Bearish Broadening Wedge. The Bearish Rising Wedge was initiated on May 30, and the measured move calls for a return to the base at 92.55. The Bearish Broadening Wedge, initiated yesterday, calls for a move back to the base near 90.84. Accordingly, in context of retail traders adding to their USDJPY longs, we find that the combination of sentiment and technicals offers a favorable opportunity for continued losses.” 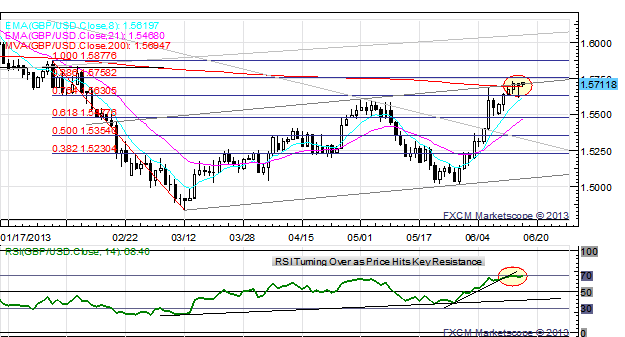 GBPUSD: The pair is attempting to crack the 200-SMA at $1.5700 again, after several rejections last week and the week before. Once more, the GBPUSD finds itself in a state trepidation as it makes little headway above the key moving average, as the daily RSI breaks its late-May/early-June uptrend at the top rail of the ascending channel off of the March and May lows (drawn to the early-May high). In terms of daily RSI, the uptrend has broken before achieving overbought conditions, suggesting that a near-term top may be in place. I maintain that I prefer the GBPUSD short from here with risk contained to the weekly highs above 1.5735/40 – although with the Fed this Wednesday, pure volatility rather than a true break could provoke price to clear this tentative level of resistance. 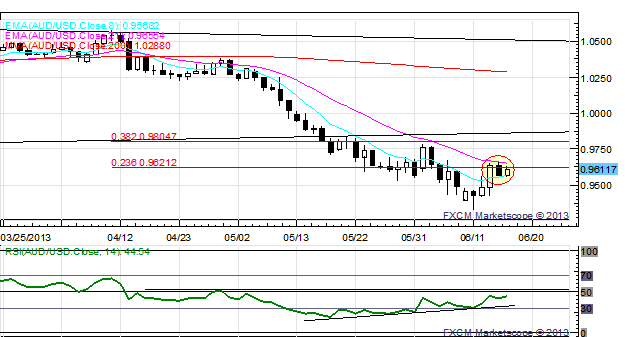 AUDUSD: More short covering for the Australian Dollar (as well as the rest of the commodity currency bloc) as an economic calendar bereft of significant data offers the calm conditions necessary for a rally by the weakest major currency in the 2Q’13. Thus far, the rally from the daily Hammer last Tuesday at major support – the Oct’11 low as well as the Nov’09 and Apr’10 highs between $0.9380/410 – has resulted in a pullback to the 23.6% Fibonacci retracement from the April high to June low at 0.9620/25, just short of the 21-EMA at 0.9655. The AUDUSD has failed to achieve a close above the 21-EMA since April 30 suggesting that selling pressure remains firm. Finally, with the bullish daily RSI divergence having been mostly resolved at this point in time as well, the last bout of AUDUSD strength may arrive this week. 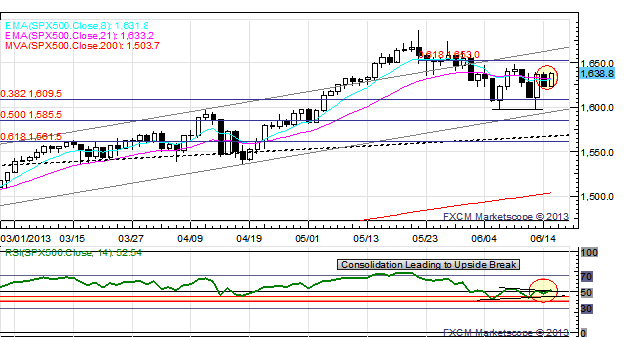 S&P 500: The S&P 500 held the 38.2% Fibonacci retracement of the late-February low to the late-May high at 1610, and is trading back to the conflux of the 8-/21-EMA at 1631/33 again – price has touched one of these two moving averages every trading session since June 7. Resistance now comes at the top of the Evening Star candle cluster that formed June 7 to June 11) at 1650. The index is also close to breaking the daily RSI downtrend, which would be supportive of further gains as well (a Symmetrical Triangle on RSI is breaking to the upside). Firm support is at 1595/1600, and a break here would lead to a sharp pullback towards 1585 and 1561. 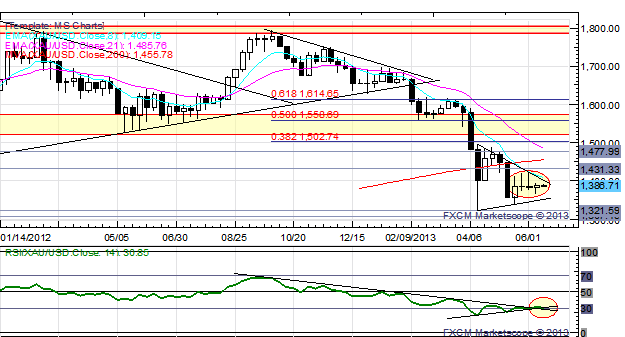