The Dow Jones FXCM Dollar Index (Ticker: USDOLLAR) is having only its second positive day over the past eight, as the non-JPY components of the index have all pulled back amid rumors that the Federal Reserve will detail its QE3 unwind at its meeting next week, on June 19. For now, the USDOLLAR is holding above the key May 9 swing low at 10480, the day the USDJPY pushed through and cracked ¥100.00 (a break below here would leave support quite sparse which could result in another dive lower in USDJPY).

In light of yesterday’s better than expected US Advance Retail Sales (MAY) report, it’s clear that the US consumer has taken advantage of low interest rates, with credit growth accelerating, house prices rising, and auto sales at their highest levels in years. Next week, this will be a major reason why the Fed will signal that it intends to keep interest rates low, so as to not disrupt a fragile recovery hamstrung by feckless fiscal policy, thanks to the lowest-rated Congress ever (per a Gallup poll released yesterday).

Accordingly, I think that the trade remains to sell xxx/JPY (i.e. EURJPY, USDJPY, etc.) rallies. There are two reasons why. First, US Treasury yields have spiked higher in recent weeks, with the 10-year yield hitting a 16-month high earlier this week. However, during this time, the Japanese Yen strengthened, particularly against the US Dollar, an unusual occurrence. Should the Fed keep its QE3 program in place on Wednesday, there is scope for a pullback in yields, which will accelerate weakness in the weak USDJPY right now. Secondly, and just as important, the BoJ has shown no intention of addressing recent volatility in Japanese bond and equity markets, which the May 21 to 22 Minutes showed last night. Accordingly, this is the perfect fundamental combination for selling rallies in the JPY-crosses for the next week. 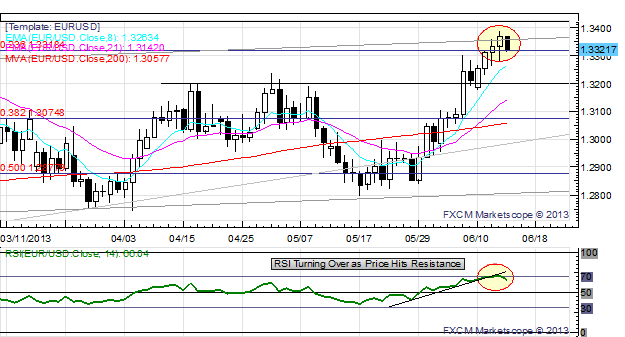 EURUSD: The pair has traded into Right Shoulder resistance in a potential Head & Shoulders pattern dating back to the September 2012 high (post-QE3 announcement), and the two overshoots on Wednesday and Thursday into $1.3400 have been rejected. Accordingly, a Bearish Key Reversal on the 4H timeframe (01:00 EDT to 05:00 EDT candle) gives an excellent reference points for shorts, as the period high coincides with the mid-January swing high at 1.3400/05. I maintain: “Considered in context of (1) the USDCHF failing to set a new monthly low as the EURUSD set a new monthly high today and (2) the EURJPY reversing sharply off of [¥128.00], there is evidence building that a turn may be coming.” 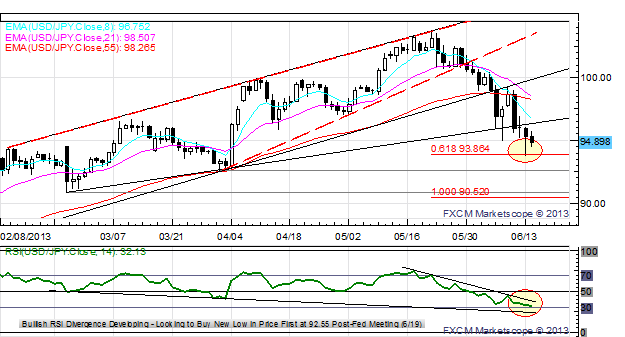 USDJPY: No change: “With US Treasury yields at their highest level in 16-months and the USDJPY sinking, there is probably trouble ahead (I don’t think Fed begins QE3 taper in June; thus yields fall as bond prices move up, weighing on USDJPY). There are two major bearish patterns in play right now: a Bearish Rising Wedge; and a Bearish Broadening Wedge. The Bearish Rising Wedge was initiated on May 30, and the measured move calls for a return to the base at 92.55. The Bearish Broadening Wedge, initiated yesterday, calls for a move back to the base near 90.84. Accordingly, in context of retail traders adding to their USDJPY longs, we find that the combination of sentiment and technicals offers a favorable opportunity for continued losses.” 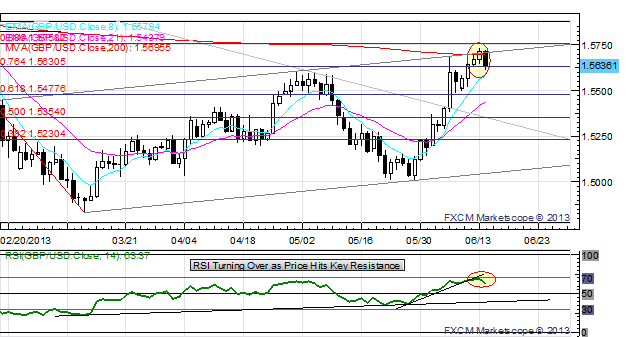 GBPUSD: The pair has attempted to crack the 200-SMA at $1.5700 several times this week, only to be rejected after a false close higher yesterday. Today, the GBPUSD finds itself holding above early-May highs, as well as the 76.4% Fibonacci retracement of the January high to March low, at 1.5631. Similarly, the pair found resistance at the top rail of the ascending channel off of the March and May lows (drawn to the early-May high). In terms of daily RSI, the uptrend has broken before achieving overbought conditions, suggesting that a near-term top may be in place. I like the GBPUSD short from here with risk contained to the weekly highs above 1.5735/40. 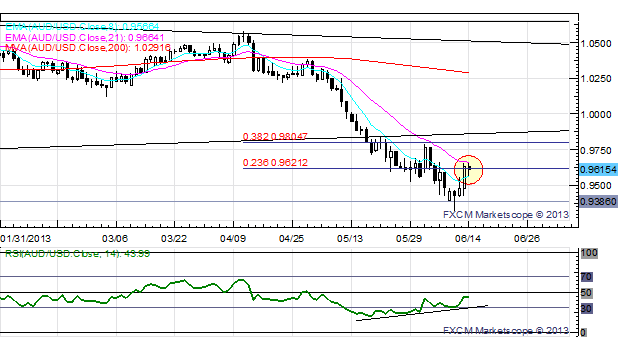 AUDUSD: No change: “The daily Hammer yesterday at major support – the Oct’11 low as well as the Nov’09 and Apr’10 highs between $0.9380/410 – has yielded to a surge higher…back to the 23.6% Fibonacci retracement from the April high to May low (at the time), at 0.9620/25.” There was a slight overshoot to the 21-EMA at 0.9664, and failure to achieve a close above the 21-EMA (hasn’t happened since April 30) opens the door for a move lower again. It’s worth noting the bullish daily RSI divergence has been mostly resolved at this point in time as well. 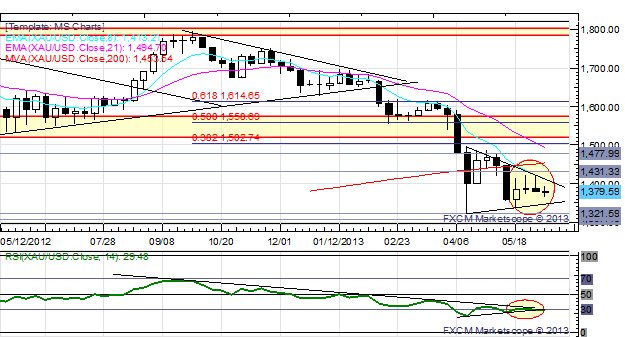