It’s no secret that the global market has a strong disdain for the Australian and New Zealand Dollars: year-to-date, they were the second and third worst performing majors against the US Dollar, shedding -9.31% and -5.00%, respectively, through yesterday. However, with market positioning extremely one-sided – as Senior Technical Strategist Jamie Saettele notes, a record short position for speculators and a record long position for commercials – it was likely that a correction occurred. Simply put, there were too few sellers in the market to sustain further downside price action in the Aussie and the Kiwi.

Accordingly, today we’re seeing one of the strongest performances out of the commodity currencies over the past year. At the time of writing, the AUDUSD had a 1-day rate of change of +1.90%, and over the past year, this has only happened twice: June 29, 2012, after the Euro-zone summit; and last Monday, June 3, 2013. Nevertheless, this rally in the commodity currency that is unfolding is a longer-term selling opportunity, but reentries should be on hold until market positioning moderates slightly – this is viewed as a short covering rally, not the establishment of new long positions.

Elsewhere, the Japanese Yen has given back some of its gains from yesterday, when a sharp decline in the US Dollar started in the US afternoon session. The Yen piques my interest over the next week to the long side for several reasons still. First, the Bank of Japan refused to act, meaning that there’s little reason to suspect the anxiety Japanese market participants have faced over the past three weeks will end. Second, the USDJPY has slid despite US Treasury yields hitting their highest levels in 16-months (a bearish divergence). Finally, in light of the higher US yields, I think that when the Federal Reserve stands pat next week with QE3, yields will pullback significantly, which historically has been negative for the USDJPY. 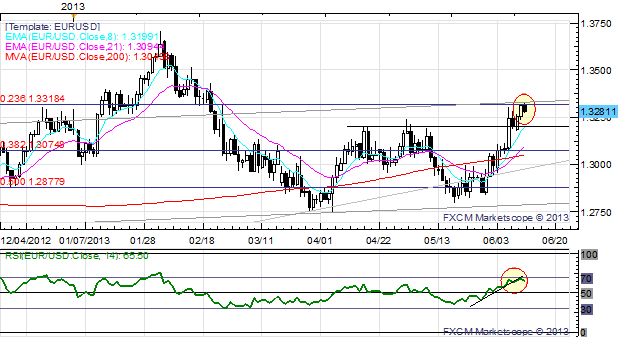 EURUSD: No change: “With daily RSI divergence presenting itself dating back to the yearly high set in February, the EURUSD is facing resistance at 1.3300/20 (late-February swing high post-Italian election, 23.6% Fibonacci retracement on Jul’12 low to Feb’13 high). At this point in time, I still favor a bullish bias, but there is evidence of overextension in the near-term given 1H and 4H RSI divergence. Now, the bigger pattern (Head & Shoulders) is in conflict with momentum (8-EMA>21-EMA>200-SMA); I prefer to stay neutral.” We had a tag of the level where the Right Shoulder should form – 1.3225 – with a small overshoot to 1.3333. Price has come off since then, and considered in context of (1) the USDCHF failing to set a new monthly low as the EURUSD set a new monthly high today and (2) the EURJPY reversing sharply off of ¥129.00, there is evidence building that a turn may be coming. 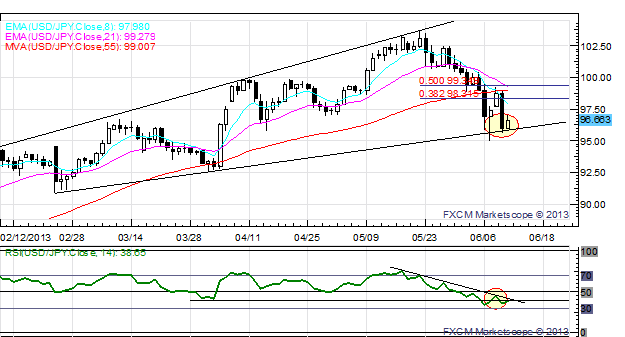 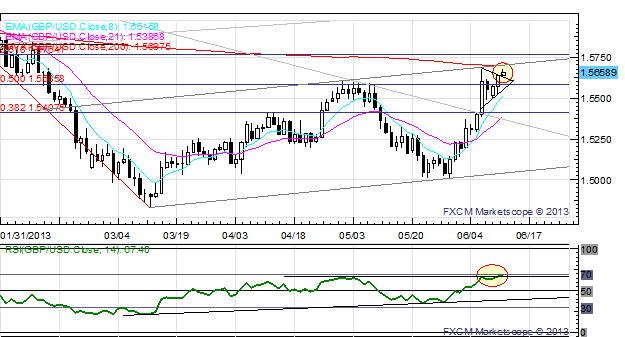 GBPUSD: No change from Friday: “Indeed, the pair has rallied to the 200-SMA at 1.5700 before reversing, and finds itself holding near early-May highs, as well as the 50% Fibonacci retracement of the January high to March low, at 1.5585. Similarly, the pair found resistance at the top rail of the ascending channel off of the March and May lows (drawn to the early-May high); and in context of the daily RSI failing at 66 again.” The GBPUSD is creeping back towards its 200-SMA once more, at 1.5698, but thus far has failed on the swing higher and is working on a lower high relative to last Thursday. Once more, “A near-term top may be forming, but it’s best to be neutral in my opinion.” 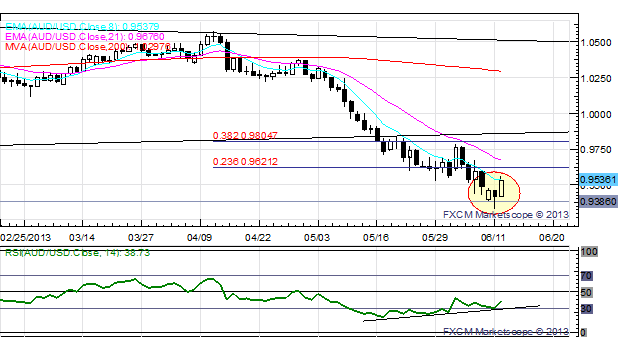 AUDUSD: The daily Hammer yesterday at major support – the Oct’11 low as well as the Nov’09 and Apr’10 highs between $0.9380/410 – has yielded to a surge higher today, back to the 8-EMA at 0.9538. It’s worth pointing out that the last big countertrend rebound – June 3 – produced a rally back to the 23.6% Fibonacci retracement from the April high to May low (at the time), and then failed. If this happens again, the AUDUSD could climb back to 0.9620/25 before sellers reemerge. 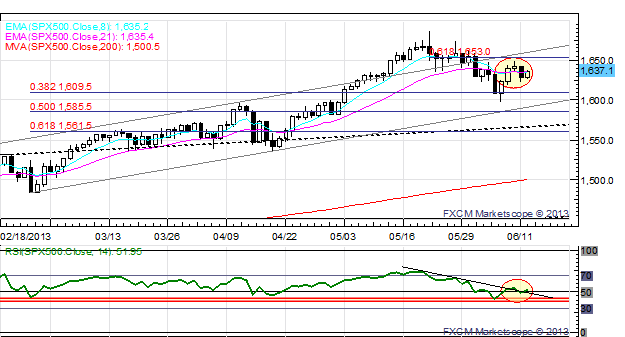 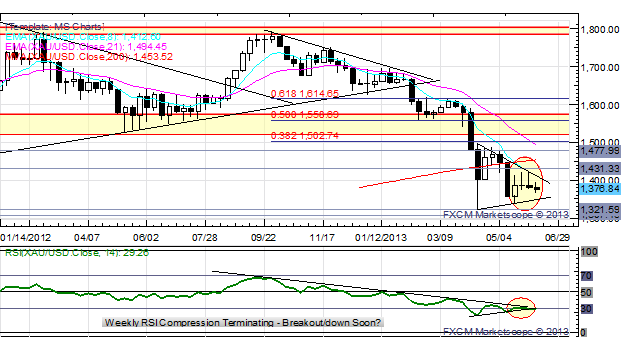