Aussie Down Under to Start Another Week; Euro Holds $1.3200 vs. USD

The Euro, alongside the two North American currencies, is leading the majors this morning after the return of liquidity during European trading hours (Australia and China were on holiday today) brought to the table fresh buyers and sellers to start the second week of June. While the US Dollar had quickly asserted itself in thin Asian trading, the big focuses today were on the continued selling of the Australian Dollar and the renewed selling pressure in the Japanese Yen.

On the Japanese Yen: the Japanese Government Pension Investment Fund, the world’s largest with assets greater than $1.1T, announced over the weekend that it would reallocate capital away from bonds and towards equities, in what Japanese PM Abe hopes will be a way to revitalize the nation’s future welfare. Further, 1Q’13 GDP figures were revised higher last night (+4.1% versus +3.5% expected annualized), and while this typically would be an endorsement for tighter monetary policy, I view it differently. Instead, the stronger growth figures serve as an endorsement of ‘Abenomics’ – the policy that has lifted Japanese equities, sunk the Yen, and provoked excessive volatility in JGBs. Tonight’s BoJ Rate Decision is key. 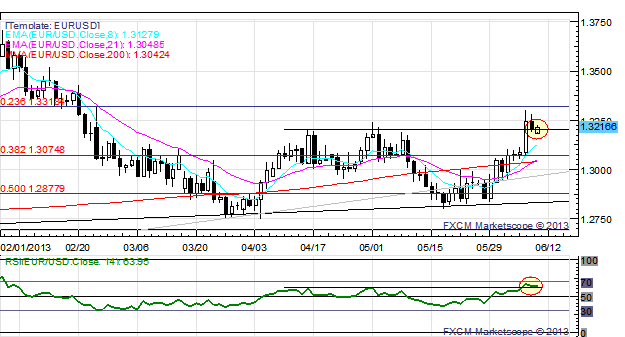 EURUSD: With daily RSI divergence presenting itself dating back to the yearly high set in February, the EURUSD is facing resistance at 1.3300/20 (late-February swing high post-Italian election, 23.6% Fibonacci retracement on Jul’12 low to Feb’13 high). At this point in time, I still favor a bullish bias, but there is evidence of overextension in the near-term given 1H and 4H RSI divergence. Now, the bigger pattern (Head & Shoulders) is in conflict with momentum (8-EMA>21-EMA>200-SMA); I prefer to stay neutral. 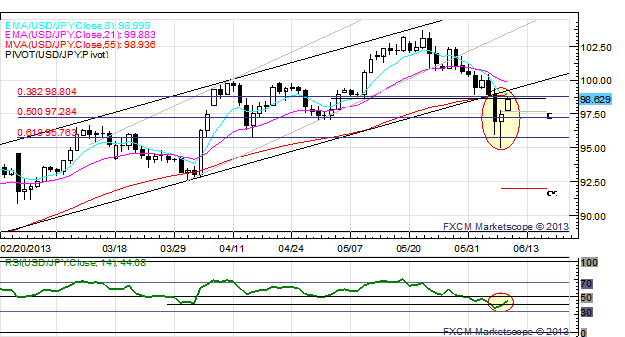 USDJPY: On Friday I said: “The previously-thought critical support of ¥98.60 proved to be just that: traders held massive stops below this level, and the break provoked the largest USDJPY selloff in three years…A poor showing by NFPs today dictates a move lower towards 94.40/75 and 92.60/80. A strong print could see the pair back to 97.40 and 98.60.” 98.60 was indeed reclaimed today, and basing on 15-min charts above this area suggests that a move further towards the 50% decline (May 22 high at 103.73 to the June 7 low at 94.98) at 99.35 is possible. Fundamental risk: the BoJ meets tonight and it is unlikely they announce major new measures or implement some type of support structure to anchor JGB volatility. I favor weakness after the US session close today. 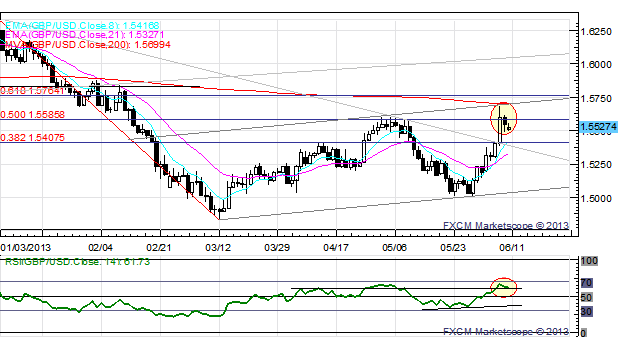 GBPUSD: No change from Friday: “Indeed, the pair has rallied to the 200-SMA at 1.5700 before reversing, and finds itself holding near early-May highs, as well as the 50% Fibonacci retracement of the January high to March low, at 1.5585. Similarly, the pair found resistance at the top rail of the ascending channel off of the March and May lows (drawn to the early-May high); and in context of the daily RSI failing at 66 again. A near-term top may be forming, but it’s best to be neutral in my opinion.” 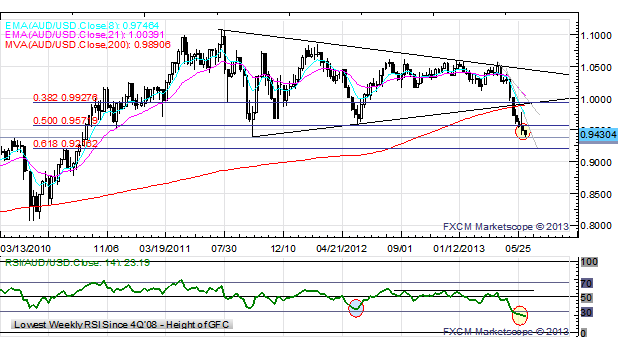 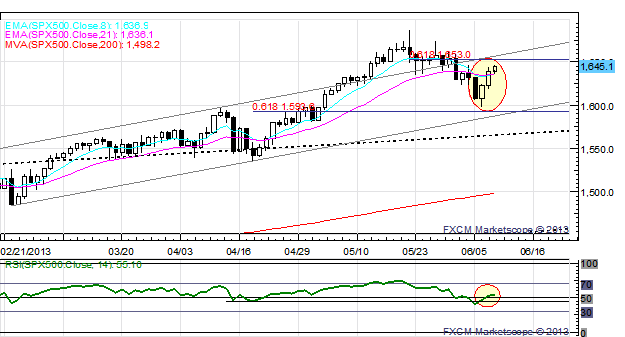 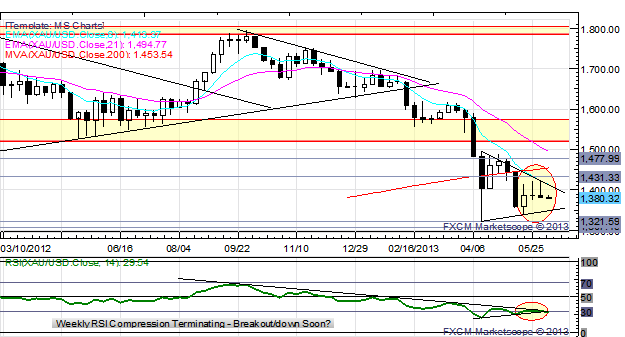