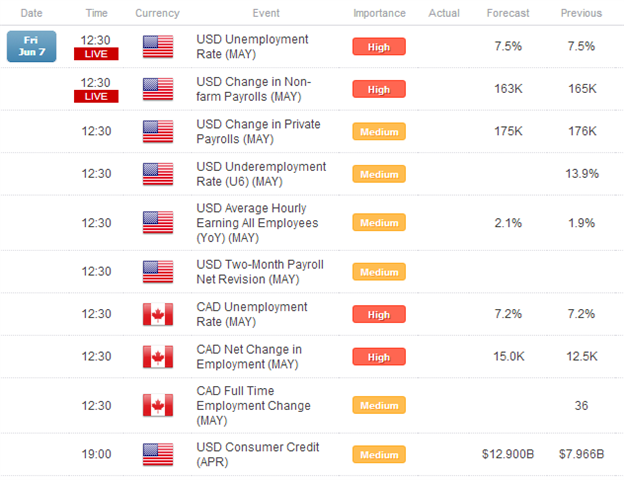 Yen Rampage Continues as USD/JPY Breaks ¥96.00; All Eyes on May NFPs

The Dow Jones FXCM Dollar Index (Ticker: USDOLLAR) endured its worst loss of the year yesterday as a massive USDJPY unwind (rumored $22 billion) sent the highly-levered pair to its worst loss in three years – yes, since the Fukushima earthquake. Interestingly enough, the major swings all happened after the European close; but the roots of the major US Dollar dislodging are rooted in the European Central Bank’s press conference.

After the ECB’s press conference, in which President Mario Draghi made it clear that the move to negative deposit rates would remain on the backburner, investors found renewed faith in the Euro, and thus began a brutal day of USD selling across the board. This view has been compounded by the fact that the recent string of US data has come to disappoint mostly since Fed Chairman Bernanke’s testimony in late-May, leading general market sentiment to agree that QE3 will remain in place for the foreseeable future. With only modest data during May, today’s NFP report represents a very real threat to the bearish US Treasury outlook, as estimates extend below +100K/month.

With that said, it appears that investors may be getting ahead of themselves. The 12-month jobs average is +188K, and our in house model suggests upside risk to +202K to +212K. Both of these figures eclipse the consensus forecast of +1653, and given our bias for a surprise, the US Dollar selloff may not extend through the end of the week. I would not rule out a major reversal, extending through 97.00/20 to 98.60, should today’s NFP report post a sizeable surprise. (View the NFP model.) 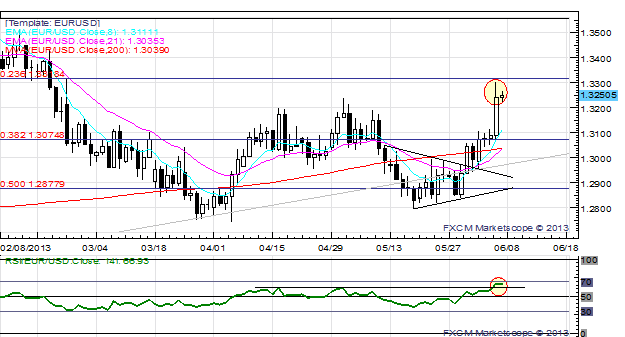 EURUSD: Yesterday I said: “Overall, I maintain that the technical structure is near-term bullish, and the rejected break of the Head & Shoulders neckline suggests there may be another thrust higher left before an eventual breakdown. Accordingly, I’m bullish above 1.2930, but looking to sell rallies into 1.3200.” No opportunity to sell 1.3200 presented itself, and the break above the 61.5 daily RSI confirmed the breakout. However, with RSI divergence presenting itself dating back to the yearly high set in February, the EURUSD is facing resistance at 1.3300/20 (late-February swing high post-Italian election, 23.6% Fibonacci retracement on Jul’12 low to Feb’13 high). At this point in time, I still favor a bullish bias, but there is evidence of overextension in the near-term. 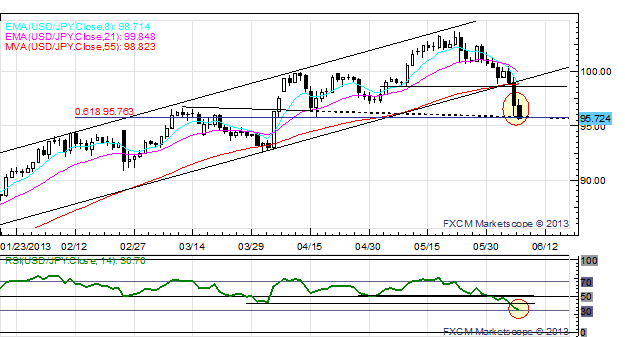 USDJPY: The previously-thought critical support of ¥98.60 proved to be just that: traders held massive stops below this level, and the break provoked the largest USDJPY selloff in three years. Now, the pair finds itself sitting at the 61.8% Fibonacci retracement of the February 25 low to May 22 high, at 95.76. A poor showing by NFPs today dictates a move lower towards 94.40/75 and 92.60/80. A strong print could see the pair back to 97.40 and 98.60. 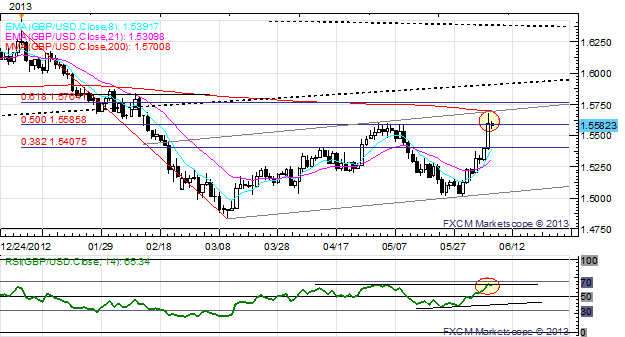 GBPUSD: The past week I’ve maintained: “A close >$1.5280 should indicate a Double Bottom has formed, with potential for the pair to reach 1.5500 at some point the next week or two.” Indeed, the pair has rallied to the 200-SMA at 1.5700 before reversing, and finds itself holding near early-May highs, as well as the 50% Fibonacci retracement of the January high to March low, at 1.5585. Similarly, the pair found resistance at the top rail of the ascending channel off of the March and May lows (drawn to the early-May high); and in context of the daily RSI failing at 66 again. A near-term top may be forming, but it’s best to be neutral in my opinion. 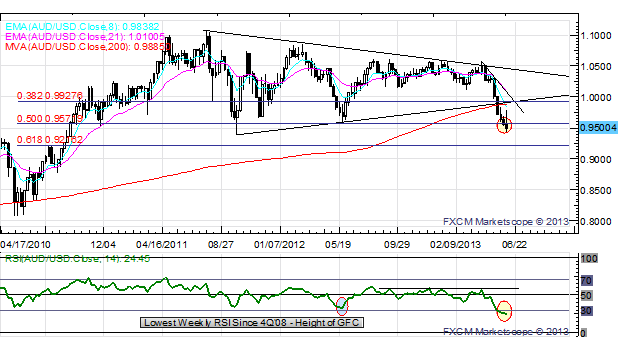 AUDUSD: No change: “Rebounds have been shallow below the ascending trendline off of the October 2011 and June 2012 lows, suggesting that a top in the pair is in place, going back to the July 2011 high at $1.1071. Although there was some upside the first few days of this week, the AUDUSD once again finds itself down after a bounce, and price has fallen back to the 50% Fibonacci retracement from the May 2010 low to the July 2011 high, at 0.9572. Considering that there has been little buying attraction here, a break below – in what would also be a break below major lows set a year ago this past week – would represent another material breakdown in the AUDUSD, with 0.9380/90 and 0.9210/20 eyed lower.” 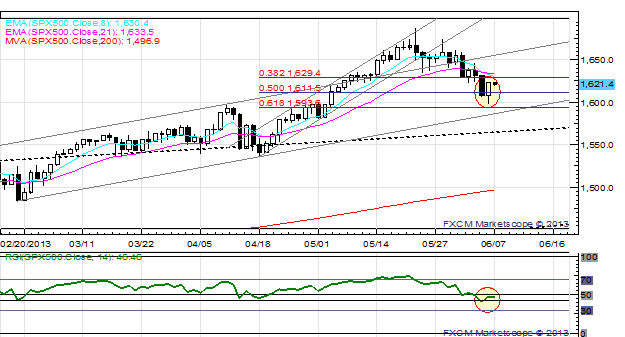 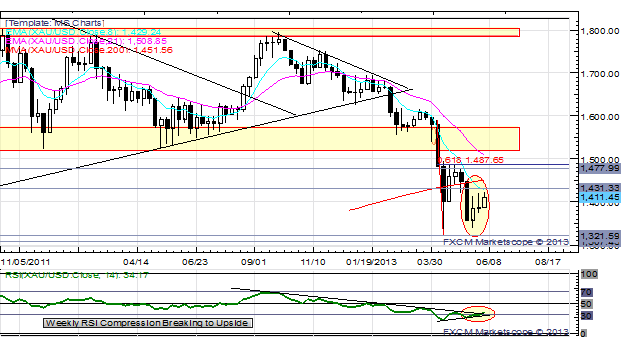