Ahead of the Bank of England and the European Central Bank policy meetings over the next few hours, the Dow Jones FXCM Dollar Index (Ticker: USDOLLAR) trading near its daily and weekly lows, as the British Pound continues to surge and is threatening a not-so-minor breakout against the US Dollar (more on that in the technical section below). While the BoE policy meeting is more or less redundant considering that it is the last one helmed by Governor Mervyn King, who will be replaced next month by former Bank of Canada Governor Mark Carney, the ECB policy meeting has the opportunity to be a small game changer for the Euro.

The EURUSD has challenged the $1.3100 figure the past several days but thus far, no close above this level has yielded, although price is basing above here today. Accordingly, I believe that a general disappointment could be set up for Euro bulls. Although loans to peripheral small- and medium-sized enterprises have continued to fall the past several months – and 12-months of contraction for the region, on the whole – it is unlikely that the ECB introduces any new, substantive measures to turn the tides of the recession.

With that said, there is room for excessive volatility and I believe the Euro (not limited to the EURUSD) could see a “pop and fade.” That is, there has been speculation that the ECB will implement negative interest rates at some point in the near-future, but without such a policy being implemented today, the Euro stands to gain on a policy hold. However, when ECB President Mario Draghi takes to his press conference, the Euro stands to suffer, as his focus will remain on the region’s weak growth and state of disinflation/deflation. As such, should the EURUSD initially rally (“pop”) towards the late-April swing highs around $1.3190/245, there is an opportunity to sell targeting 1.2930 and 1.2860 over the coming week (“fade”). 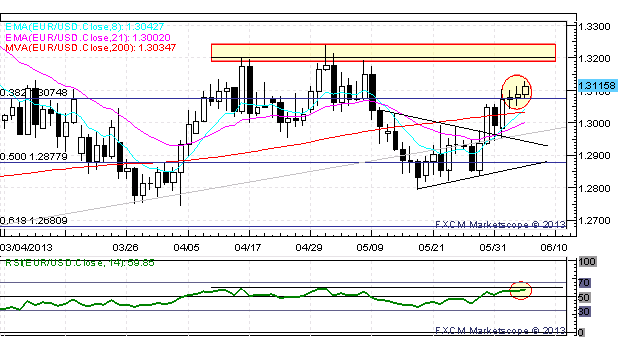 EURUSD: The break of the 38.2% Fibonacci retracement (Jul’12 low to Feb’13 high) at $1.3075 has put the EURUSD in the position to achieve 1.3190/245 today, the zone containing the mid-April swing highs. However, it is important to note that alongside this price resistance zone, the daily RSI hasn’t eclipsed 61.5 during rallies. Thus, I will look to fade the EURUSD should price enter this area. Overall, I maintain that “the technical structure is near-term bullish, and the rejected break of the Head & Shoulders neckline suggests there may be another thrust higher left before an eventual breakdown. Accordingly, I’m bullish above 1.2930, but looking to sell rallies into 1.3200.” 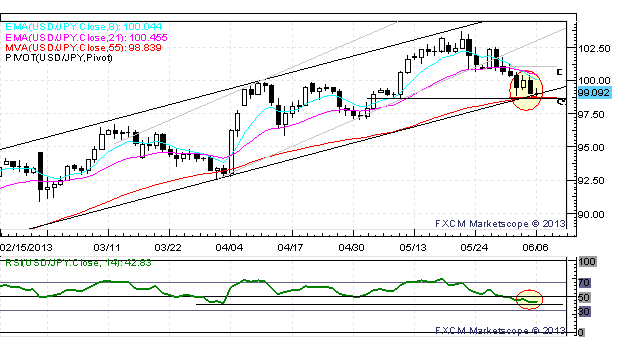 USDJPY: While we favor the USDJPY lower in the near-term due to retail trader positioning, the USDJPY has achieved its near-term target lower and now faces staunch support at ¥98.60/85, the conflux of the: 55-EMA; weekly S2; ascending channel support off of November 14, 2012 and April 2, 2013 lows; and early-May swing support before the thrust through 100.00. If there was a place to look for a rebound, this is it. Conversely, a poor showing by NFPs tomorrow could trigger an even deeper pullback towards 97.00 and 95.75 over the coming week. 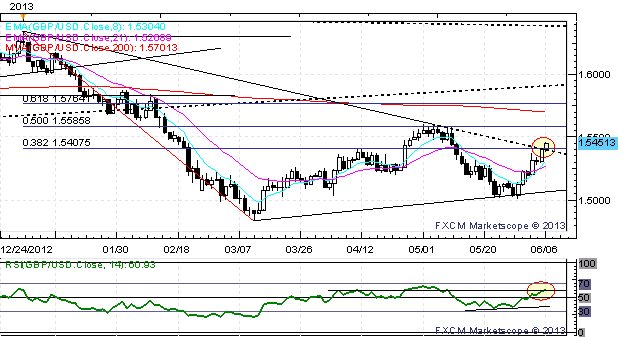 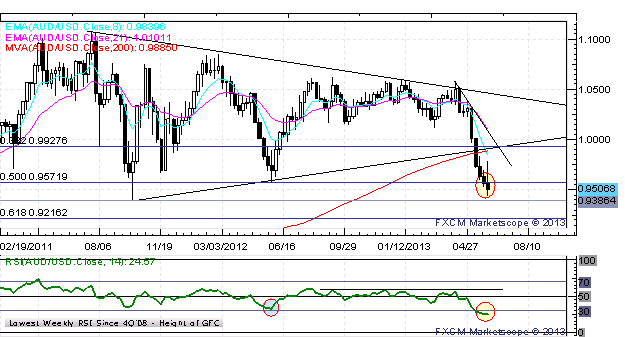 AUDUSD: Rebounds have been shallow below the ascending trendline off of the October 2011 and June 2012 lows, suggesting that a top in the pair is in place, going back to the July 2011 high at $1.1071. Although there was some upside the first few days of this week, the AUDUSD once again finds itself down after a bounce, and price has fallen back to the 50% Fibonacci retracement from the May 2010 low to the July 2011 high, at 0.9572. Considering that there has been little buying attraction here, a break below – in what would also be a break below major lows set a year ago this past week – would represent another material breakdown in the AUDUSD, with 0.9380/90 and 0.9210/20 eyed lower. 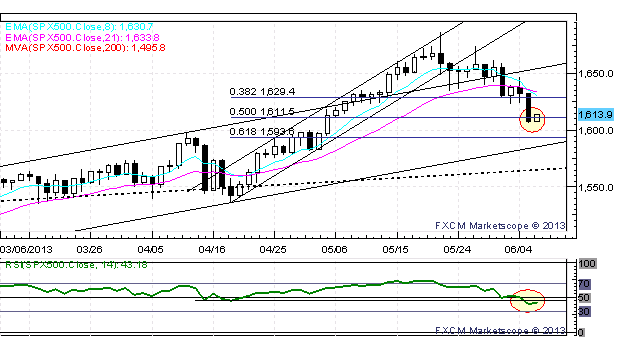 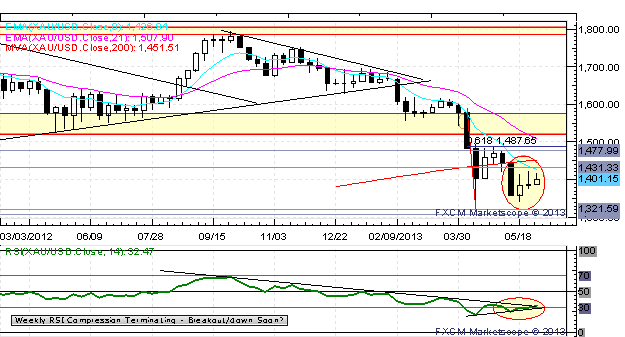