The Dow Jones FXCM Dollar Index (Ticker: USDOLLAR) is down on the first trading day of June, as further weakness in Japanese bond and equity markets has once again provoked gains by the Japanese Yen, while a stronger than expected Chinese manufacturing report has the commodity currencies, led by the Australian Dollar, on the bid this morning. Overall, it’s important to consider that the US Dollar just had its strongest month in a year (May 2012), and with technical conditions in the Asian-Pacific currencies exceptionally stretched, a period of consolidation/give back shouldn’t be ruled out.

Certainly, if there is a time for the US Dollar to give back gains, the stage has been set neatly at the beginning of the week. The Chinese PMI Manufacturing (MAY) report beat expectations (50.8 versus 50.0 expected, from 50.6) after market close on Friday, while the smattering of the final May PMI Manufacturing reports from Germany, France, Italy, and the broader Euro-zone suggested that the rate of contraction is slowing; these reports in tandem have offered a counterpoint to excessive negativity re: global growth.

Even though there is the always important US labor market report due this Friday, my focus is first drawn to the European Central Bank policy meeting on Thursday. The big question this week is: what will the ECB to stoke credit flow throughout the region? As per data released on Wednesday by the ECB, loans to the Euro-zone fell by -0.9% y/y in April, worse than the -0.7% y/y forecast. This was the twelfth consecutive month of contraction, underscoring the hesitancy of banks to inject capital into the periphery. One such measure being discussed is the implementation of negative deposit rates. The short of it: negative rates should incentivize banks to step up loan originations, as well boost capital spending – both of which would provide a much needed boost to the economically and socially depressed region. 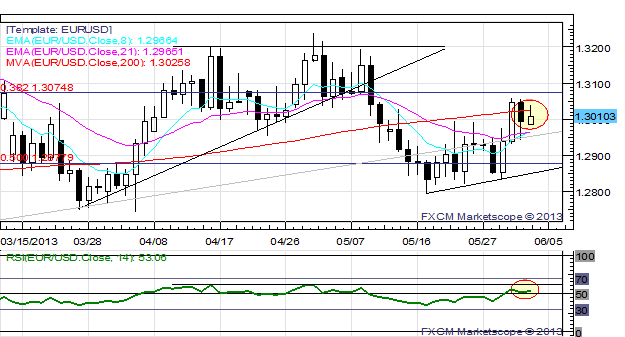 EURUSD: The Symmetrical Triangle noted the past several days yielded a break to the upside but failure to achieve the 38.2% Fibonacci retracement (Jul’12 low to Feb’13 high) at $1.3075 has further gains in question. Nevertheless, the technical structure is near-term bullish, and the rejected break of the Head & Shoulders neckline suggests there may be another thrust higher left before an eventual breakdown. Accordingly, I’m bullish above 1.2930, but looking to sell rallies into 1.3200. 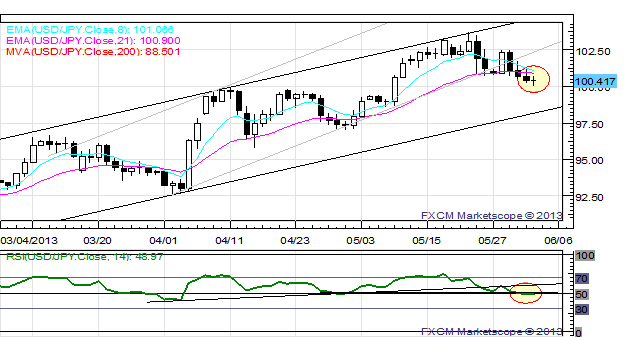 USDJPY: Another failed run at ¥100.00 today has the USDJPY working on a Doji to start the month, a fitting candlestick that gives a clean levels to the upside and to the downside to work off of to dictate beginning of the month and week biases. With that said, I’m neutral here as I’m waiting to see how US stocks react, and a further dive in risk appetite threatens to drag the USDJPY under 100.00. The compressing nature of the 8-/21-EMA – in what would be the first bearish cross since late-March/early-April – would dampen bulls’ hopes for at least the next few days. 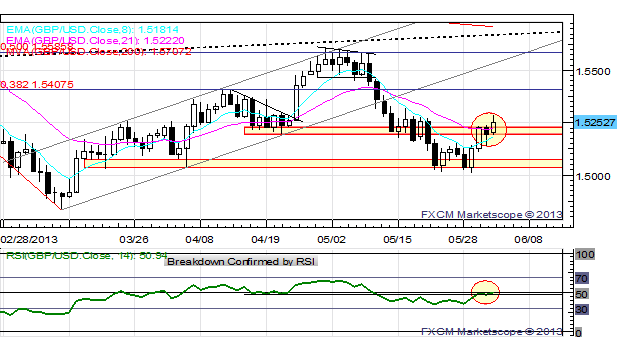 GBPUSD: Despite failure on Friday, the turnaround late-day led to a Hammer forming in the 8-/21-EMA “catch” zone, and price action today has seen the pair trade through the 21-EMA at $1.5220/25. This would be the first close above the 21-EMA since May 9. A close >1.5280 should indicate a Double Bottom has formed, with potential for the pair to reach 1.5500 at some point the next week or two. 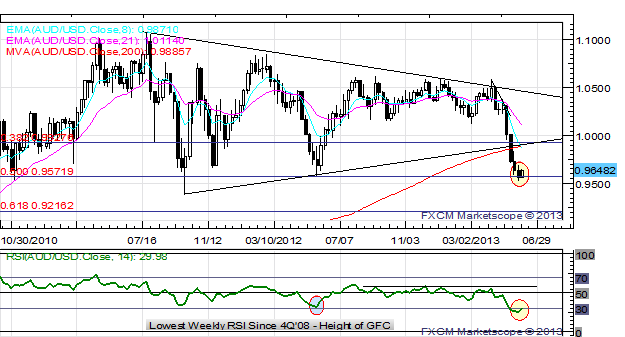 AUDUSD: Price has been steady below the ascending trendline off of the October 2011 and June 2012 lows, suggesting that a top in the pair is in place, going back to the July 2011 high at $1.1071. Price has steadied at the 50% Fibonacci retracement from the May 2010 low to the July 2011 high, as well as the 2012 low set (coincidentally) this week last year. In the very near-term, with the weekly RSI at the lowest level since the height of the global financial crisis in the 4Q’08, the AUDUSD is probably close to a point of near-term exhaustion. Rebounds should be sold. Ideally, 0.9860 is reached to the upside for a strong sell. 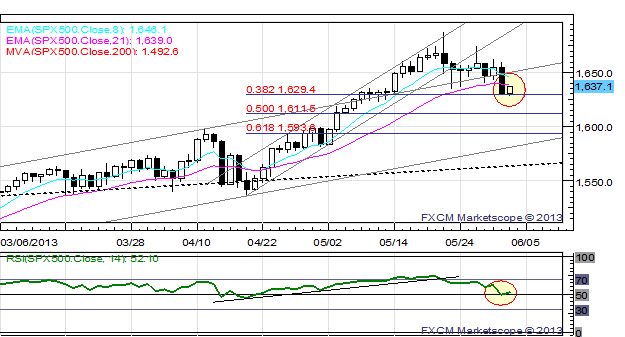 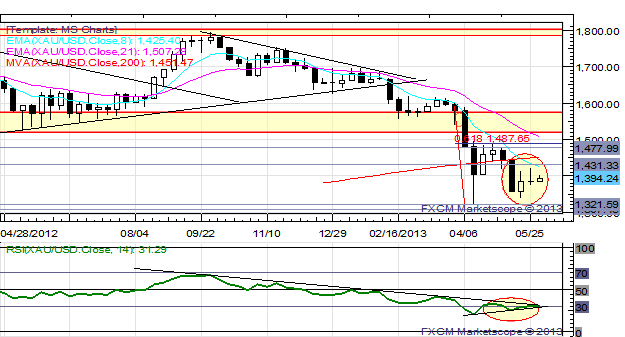