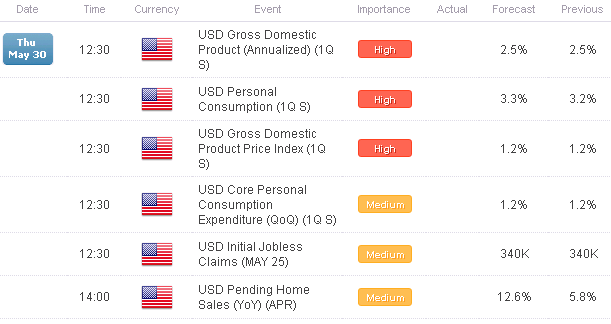 The Dow Jones FXCM Dollar Index (Ticker: USDOLLAR) was threatening a break below crucial May support, opening the door for further losses in the US Dollar against the Euro and the Japanese Yen especially, but on the back of a surprise report from Reuters, a solid daily Hammer has formed, suggesting that further gains for the world’s reserve currency – and recent darling – may be on the horizon.

The gist of the Reuters report is as follows: ‘Abenomics’ has dramatically altered investors’ risk tolerance, and at risk of missing out on the globe’s hottest equity market rally, Japan’s public pension fund is exploring altering its charter. Considering that Japan’s public pension fund – AUM of $1T – holds most of its assets in the form of JGBs, this is clearly a sign that the recent volatility in bond markets has been unnerving to say the least. In reaction to said news, Nikkei futures, which were hovering near the daily lows following the >-5% decline in the cash market overnight, rallied sharply, pulling up the USDJPY, away from session lows at ¥100.46 to as high as 101.70. While gains have eased – price was fighting near 101.50 at the time of writing – there’s another catalyst in the near-term future, which has likely kept the EURUSD’s advance at bay, with price hitting $1.3007 before reversing sharply.

The second release of the 1Q’13 US GDP report is due out this morning at 08:30 EDT/12:30 GMT, and given the upwards revisions in January-March data, there is potential for a slightly higher revision. Consumption trends have held up in 2013 despite the payroll tax hike in January and the ensuing budget sequestration in March (though these effects will be felt during the summer). On a related note, the February Nonfarm Payrolls report was revised higher to +332K, and NFPs have averaged at least +200K on a rolling three-month basis for the past five months. If the report disappoints, the US Dollar will be crushed. 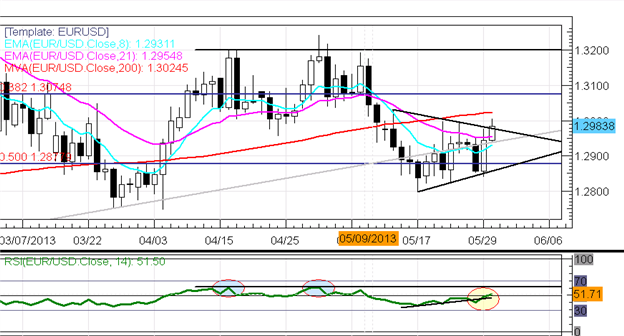 EURUSD: Yesterday I said: " It appears a Symmetrical Triangle has formed on the daily chart, and given the move lower, my initial feeling is that this is a consolidation waiting to break lower. As the range plays out, I’m in wait-and-see mode.” We’ve hit the topside of the triangle already today and nearly broke after touching $1.3007, but so far, no break. I thus maintain a bearish bias, but a close > 1.3000/30 will negate and imply a rally towards 1.3220/50 (mid-April swing highs). To the downside, a break of 1.2795/800 would confirm the move towards 1.2750 and 1.2680. 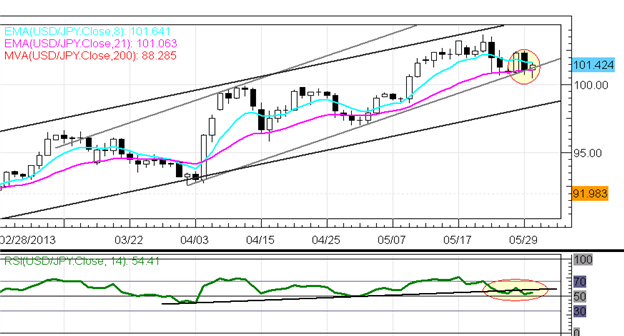 USDJPY: Yesterday I said: “Overall, price is relatively unchanged from the past several days, with the 21-EMA pacing the ascending trendline support off of the April 2 and April 31 lows as support, holding today once more. Although the daily RSI uptrend appeared to be back in play, today’s selling has a clear break once more. A further breakdown through trend support eyes a move towards 100.00, then 97.50.” It appeared that the big break may have been coming, but a Hammer at the 21-EMA after setting new weekly lows has opened the door for a rally back towards 102.50 – a strong US GDP report is key. 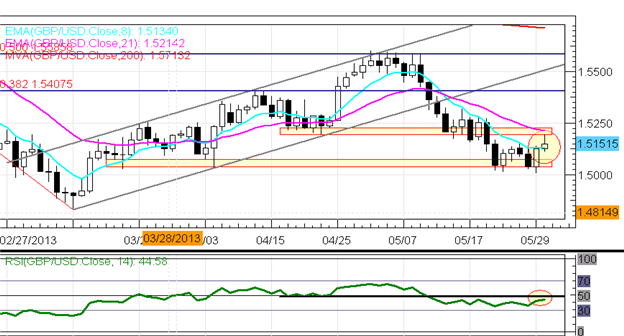 GBPUSD: Although a new May low was set at $1.5007, price has reversed the past 24-hours and encroached the 21-EMA, as well as former mid-April support, at 1.5190/250, but price has shifted lower amid the US Dollar rally the past hour-plus, and now an Inverted Hammer has formed on the daily chart. While I said yesterday that my “bearish bias is valid unless 1.5165 trades,” this might have been the US Dollar pullback we were looking for. Today’s close is crucial to determine if this rebound was merely a reaction off of the psychologically significant 1.5000 level. 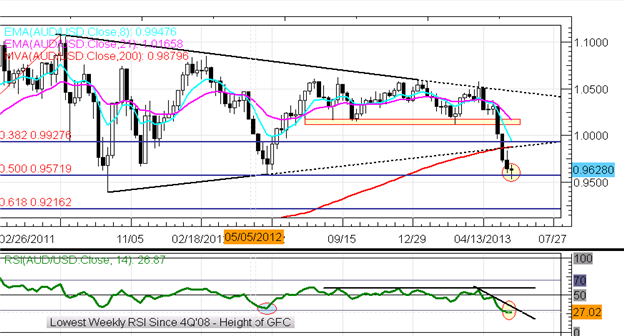 AUDUSD: No change: “The past several weeks I’ve maintained: a deeper pullback towards 0.9580 and 0.9380/400 is beginning. Price has been steady below the ascending trendline off of the October 2011 and June 2012 lows, suggesting that a top in the pair is in place, going back to the July 2011 high at 1.107. I maintain that I’m awaiting a monthly close below $0.9860, but that seems all but guaranteed with two days left in the month. The first target of 0.9580 was hit overnight and I expect a reaction at this level, given its significance as the 50% Fibonacci retracement from the May 2010 low to the July 2011 high, as well as the 2012 low set (coincidentally) this week last year. In the very near-term, with the weekly RSI at the lowest level since the height of the global financial crisis in the 4Q’08, the AUDUSD is probably close to a point of near-term exhaustion. Rebounds should be sold.” 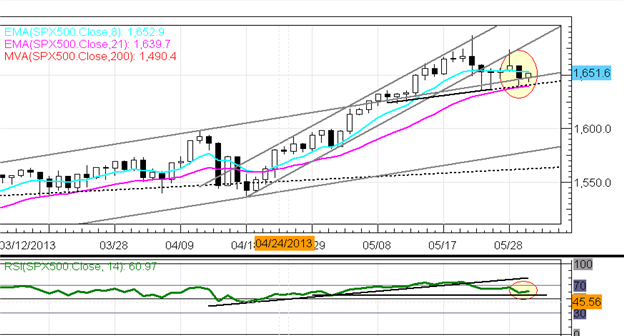 S&P 500: The S&P 500 has traded back to former channel resistance, which contained the US equity market from late-February to early-May (drawn off of the February 25 and April 18 lows, to the April 11 high). The support coincides with the 21-EMA currently, forming a zone of support from 1639 to 1650. In conjunction with a descending trendline off of the May 22 and May 28 highs, it appears a triangle may be forming for a push higher. Bulls hopes would be squandered below 1634. 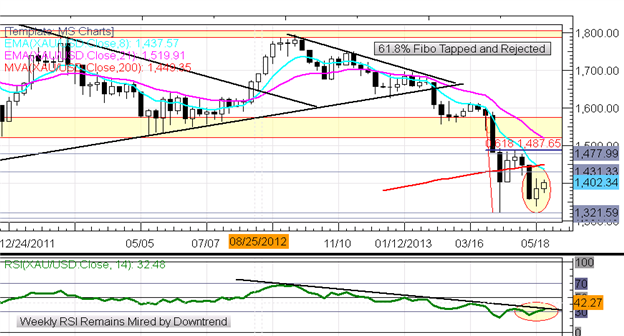