US Dollar Starts Slide in Europe; Euro, Franc Surge as US Trading Approaches

The Dow Jones FXCM Dollar Index (Ticker: USDOLLAR) is falling fast in pre-North American trading hours today, for no real rhyme or reason, but rather, what is tentatively being viewed as month-end flows and profit taking. The US Dollar, expressed by the USDOLLAR Index, was up +4.07% on the month before today’s open, quite a strong move for any currency, particularly one that remains hampered by an ultra-dovish central bank policy regime.

Nevertheless, after an exceptionally volatile month in the safe havens, the commodity currencies, and the European currencies – actually, across the entire FX landscape – it wouldn’t be entirely surprising to see a major dislocation over the next several days as profit is taken. Key questions linger in traders’ minds: will the Fed taper QE3 beginning in June, September, or December; will the ECB implement negative rates to try and spur lending; will the BoJ be able to prevent turmoil in JGBs and keep the Nikkei chugging along, at the Yen’s expense; and are the Aussie and Kiwi selloffs warranted given the increasingly excessive negativity on China?

While we await these answers over the next several weeks and months, the one that is most likely to be answered in the immediate future is whether or not the ECB will implement negative rates. The past several days, several ECB policymakers have been making the rounds touting their respective views on monetary policy, and just like the Fed’s collective view on tapering QE3, there is no consensus on implementing negative rates by the ECB. This is important as there is an ECB policy meeting next Thursday, at which point this issue will be looked at directly. Given the negative impact speculation has had on the Euro, any such signs that negative rates are unlikely could provoke gains in the Euro, especially against the US Dollar. 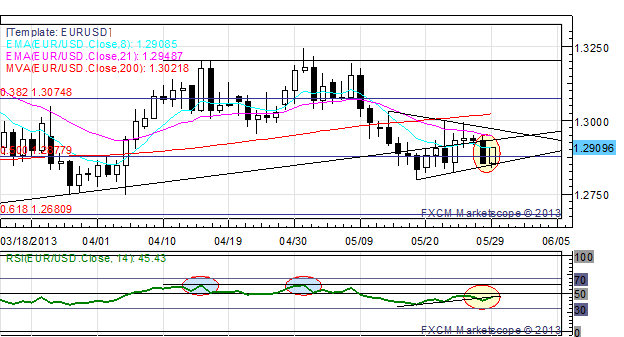 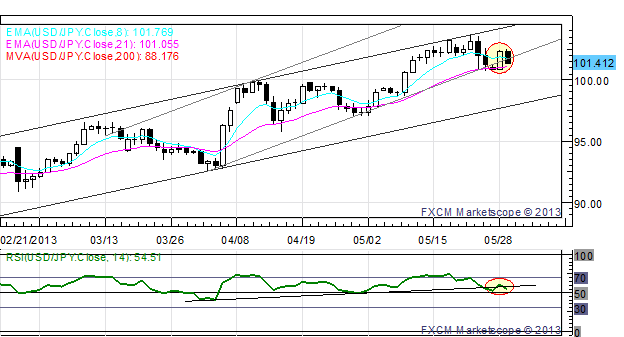 USDJPY: Price failed to retake ¥102.50 last night and today, and trading in the European session has seen the USDJPY plummet back towards 101.00, although the pair was seen steadying just above at the time of writing. Overall, price is relatively unchanged from the past several days, with the 21-EMA pacing the ascending trendline support off of the April 2 and April 31 lows as support, holding today once more. Although the daily RSI uptrend appeared to be back in play, today’s selling has a clear break once more. A further breakdown through trend support eyes a move towards 100.00, then 97.50. 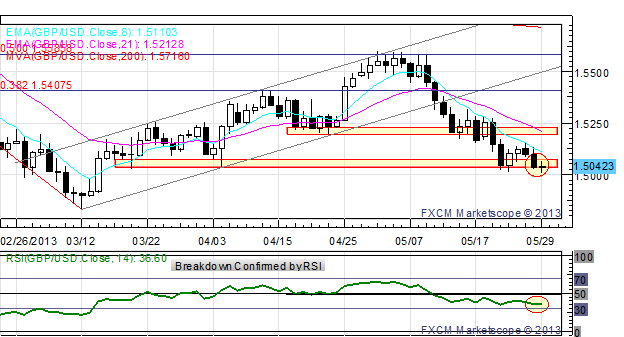 GBPUSD: Although my $1.5015 target was reached, price has rebounded and is relatively unchanged the past week, with momentum higher picking up at the time this report was written. I continue to eye the 8-EMA, which has served as resistance since early-May, and as such I look to sell rallies on ‘touches’ of the 8-EMA. With a new low set today, the bearish bias is valid unless 1.5165 trades. 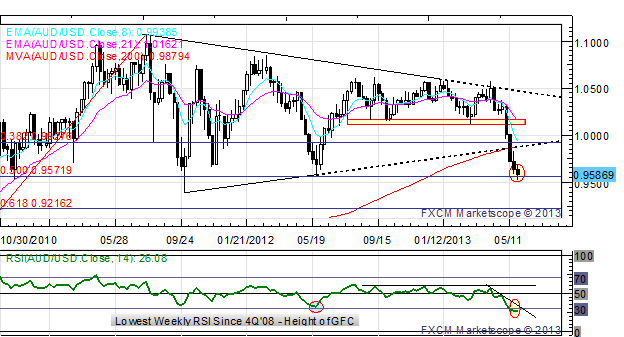 AUDUSD: The past several weeks I’ve maintained: “a deeper pullback towards 0.9580 and 0.9380/400 is beginning.” Price has been steady below the ascending trendline off of the October 2011 and June 2012 lows, suggesting that a top in the pair is in place, going back to the July 2011 high at 1.107. I maintain that I’m awaiting a monthly close below $0.9860, but that seems all but guaranteed with two days left in the month. The first target of 0.9580 was hit overnight and I expect a reaction at this level, given its significance as the 50% Fibonacci retracement from the May 2010 low to the July 2011 high, as well as the 2012 low set (coincidentally) this week last year. In the very near-term, with the weekly RSI at the lowest level since the height of the global financial crisis in the 4Q’08, the AUDUSD is probably close to a point of near-term exhaustion. Rebounds should be sold. 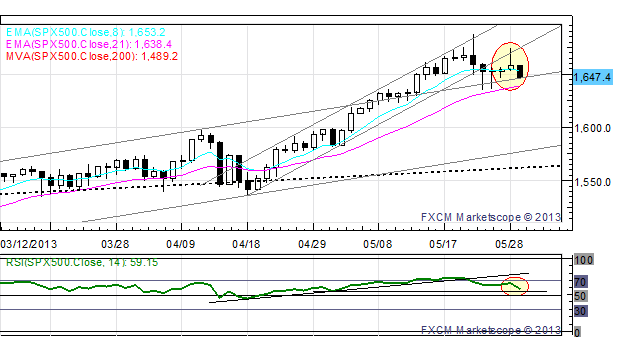 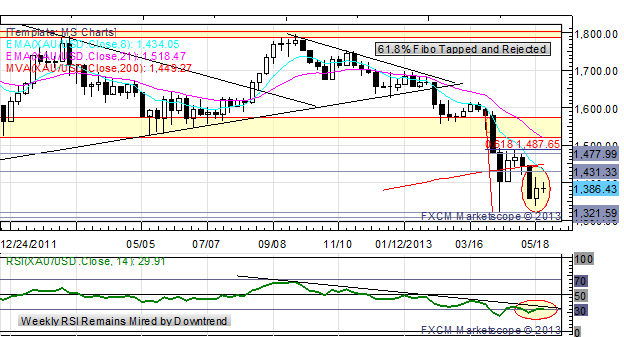