After being put through a bit of a ringer this past week – the US Dollar rallied after the Federal Reserve indicated it is shifting its strategy towards gradually tightening the liquidity spigot, and the Japanese Yen rallied amid the massive sell-off in Japanese bond and equity markets – the Euro has emerged as a top performer this week, building off of last week’s gains.

Although the EURCHF lost Sf1.2500 overnight (due to Franc strength), the EURUSD burst higher following a much improved German IFO survey that suggest s the German economy might have seen a bit of a resurgence in May. The survey, which showed that German business confidence increased for the first time in three months, raises the bar for 2Q’13 growth projections, which in my opinion should have little trouble beating the dour 1Q’13 report – whose final iteration was released today, showing that the economy grew by +0.1% q/q but fell by -0.2% y/y adjusted or -1.4% y/y unadjusted – as a spat of inclement weather impacted businesses and consumers alike.

While the EURUSD has thus far failed at cracking $1.3000, there is still a chance for later on today, when the US Durable Goods Orders (APR) report is released at 08:30 EST/12:30 GMT. A modest rebound is expected (+1.5% versus -6.9% prior (m/m)), although given the tempered trend of expansion in industrial and manufacturing production, there may not be much to see here besides the fact that the US economy continues to struggle to find firm footing. 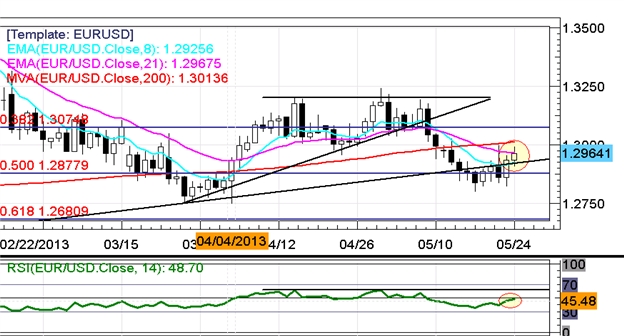 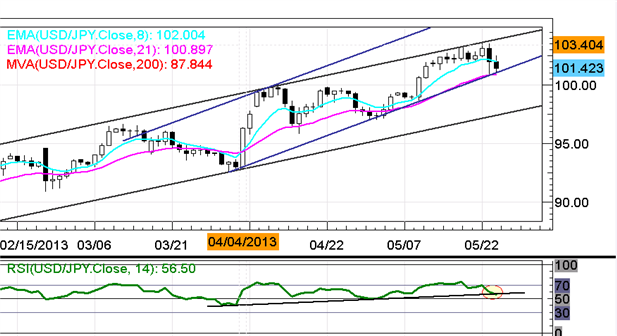 USDJPY: Although price has attempted to retake ¥102.50 today, further selling in the Nikkei alongside volatility in JGBs has stoked the revival of the Yen as a safe haven; certainly, the decline in the domestic equity market suggests that the domestic currency would gain in value anyway (intermarket analysis theory). Price is relatively unchanged from yesterday, as the reversal has cut through the key 101.80 level, leading to a deeper pullback to the 21-EMA at 100.80/90 on Thursday, and a run towards 101.00 earlier today. We are watching the 21-EMA, as it is pacing the ascending trendline support off of the April 2 and April 31 lows, coinciding with the same trend on the daily RSI. A further breakdown eyes a move towards 100.00, then 97.50. 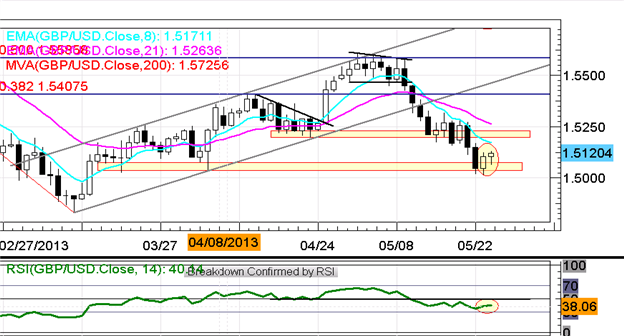 GBPUSD: No change: “The GBPUSD is back pressuring last week’s lows. With price holding below the $1.5200/20 region I was watching last week, a move towards the early-April lows at 1.5035/75 now eyed….with daily RSI support cracked, the plan is to sell rallies. Indeed, the lower 1.5035 target was reached, and with the trade stretched to the downside, brief pause allowing the 8-EMA to catch up to current price could occur. I still prefer selling rallies towards the big picture move towards 1.4200.” 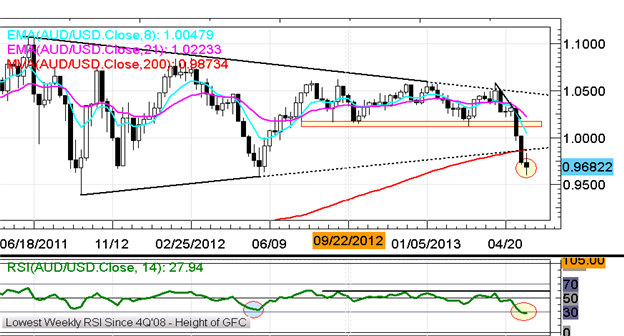 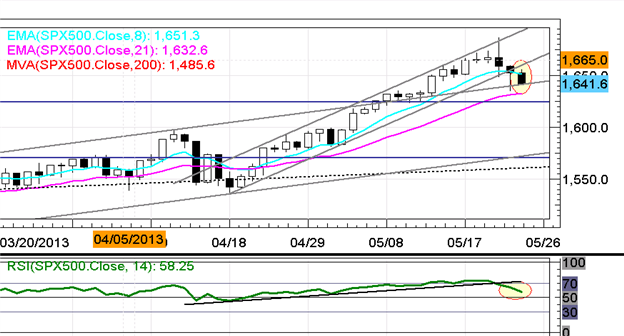 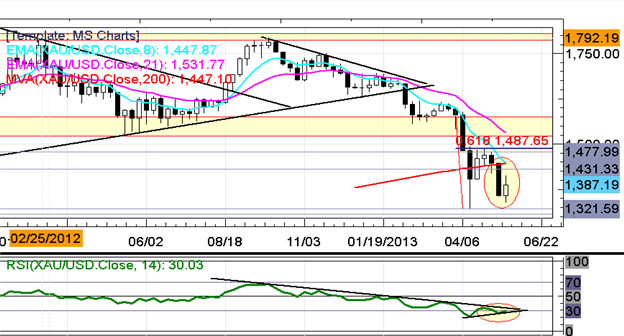