After touching its highest level in four and a half years, the USDJPY staged a massive overnight reversal, falling from a high of ¥103.73 on Wednesday to as low as 100.82 in early European trading hours today. In a sell-off that is being credited to the weak Chinese private sector manufacturing report, the Nikkei 225 plunged -7.32%, the single largest drop since October 2008 – the beginning of the end for global equities. However, Japanese Economic Minister Akira Amari said that is normal for equity losses to boost the domestic currency, and that the stock bubble hadn’t yet popped (I think a decline of this magnitude in one session is a mini-bubble bursting); thus Yen losses should be insulated.

Despite the single greatest drop in three years for the USDJPY, the US Dollar overall remains resilient, with the Dow Jones FXCM Dollar Index (Ticker: USDOLLAR) retaining some of yesterday’s gains, while holding its ground against the commodity currencies. A lot has been said about the scope of Fed Chairman Ben Bernanke’s comments yesterday – that QE3 would remain in place until data improved, and if it did, then the scale of asset purchase could decline – but to me, it’s more of the same.

Chairman Bernanke reiterated nearly every talking point from the Fed over the past few weeks, including from those in his inner circle, such as NY Fed President William Dudley. As noted yesterday, the Fed’s tone is and remains: ‘the economy is improving, but isn’t great yet; the labor market is steadily moving upwards, but isn’t where it should be for us to withdraw stimulus; disinflation is setting in, but stronger consumption persists; and the payroll tax and ensuing budget sequestration have created quite the fiscal drag.’ I don’t expect any sort of news about a taper at the June meeting (barring a +300K NFP print); any such major shift in policy is likely to occur at the September meeting. 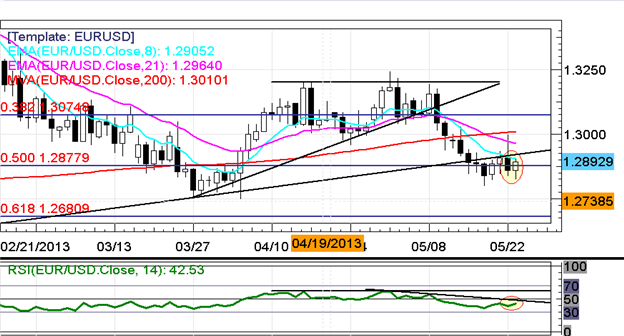 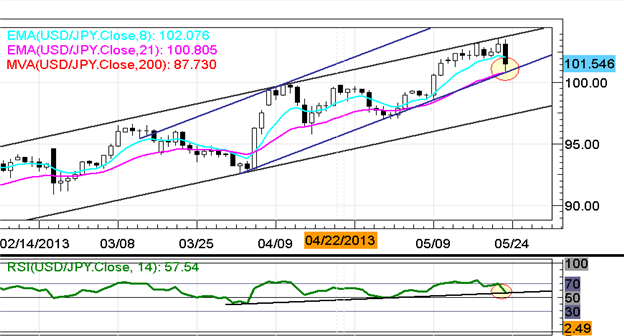 USDJPY: We almost got the blowout move yesterday but price was capped by the same trendline that constrained the move above ¥103.00 on Friday, with price topping at 103.73. The reversal cut through the key 101.80 level, leading to a deeper pullback to the 21-EMA at 100.80/90. This level also is ascending trendline support off of the April 2 and April 31 lows, coinciding with the same trend on the daily RSI. A further breakdown eyes a move towards 100.00, then 97.50. 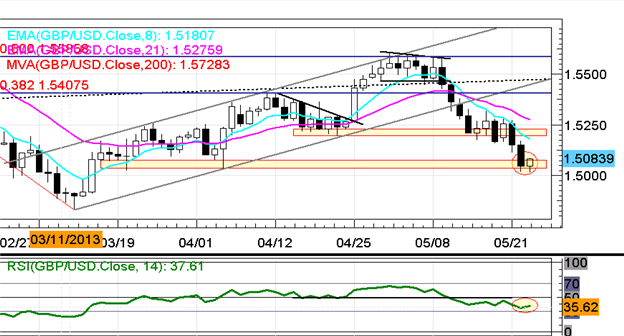 GBPUSD: Yesterday I said: “The GBPUSD is back pressuring last week’s lows. With price holding below the $1.5200/20 region I was watching last week, a move towards the early-April lows at 1.5035/75 now eyed….with daily RSI support cracked, the plan is to sell rallies.” Indeed, the lower 1.5035 target was reached, and with the trade stretched to the downside, brief pause allowing the 8-EMA to catch up to current price could occur. I still prefer selling rallies towards the big picture move towards 1.4200. 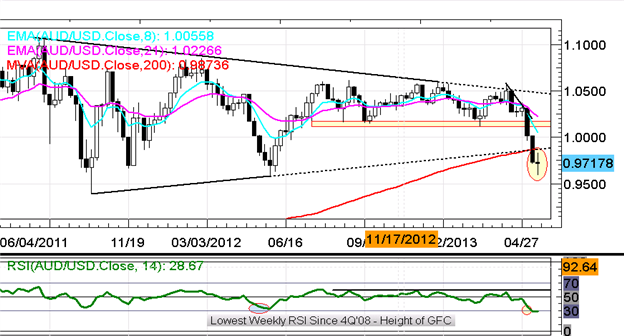 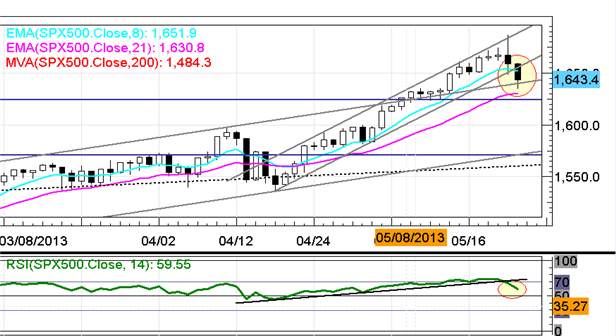 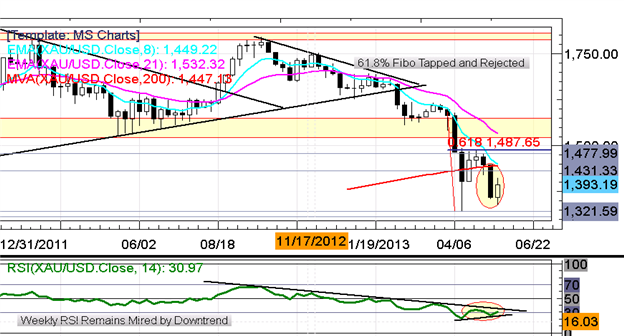