The past several hours have produced increased volatility across the board, though the clear winner today – simply because of a lack of data on the calendar and no commentary from key policymakers – is the Euro. Notably, the EURCHF hit Sf1.2600 for the first time since May 2011 after Swiss National Bank President Thomas Jordan said to reporters this morning that the SNB has not yet ruled out negative interest rates, and would not shy away from raising the EURCHF floor in the event of continued Franc strength (which has provoked low inflation over the past few years).

While the USDCHF has rebound back towards the significant Sf 0.9750 level (resistance in May), further gains are in question today as Federal Reserve Chairman Ben Bernanke is set to testify in front of a congressional committee today at 10:00 EST/14:00 GMT. Although the stream of chatter out of the Fed has been quite neutral recently, most market participants are looking ahead down the road towards a day when the Fed is no longer easing at the torrid pace of $85B/month.

In all likelihood, Chairman Bernanke sticks to the script today, the one that NY Fed President William Dudley was out touting this morning in an interview with Bloomberg News (he said that he and Bernanke were “in sync” on policy). That is: ‘the economy is improving, but isn’t great yet; the labor market is steadily moving upwards, but isn’t where it should be for us to withdraw stimulus; disinflation is setting in, but stronger consumption persists; and the payroll tax and ensuing budget sequestration have created quite the fiscal drag.’ These are the same talking points from the Fed’s May meeting, whose Minutes will be released today at 14:00 EST/18:00 GMT. 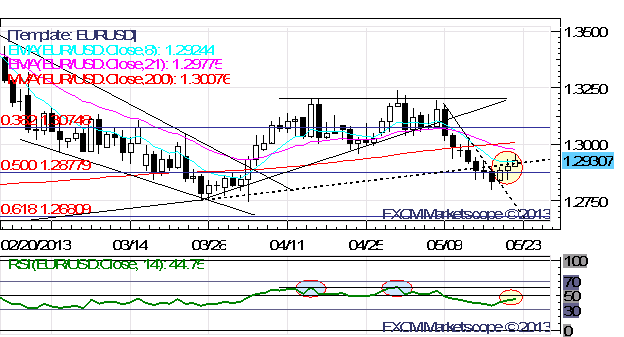 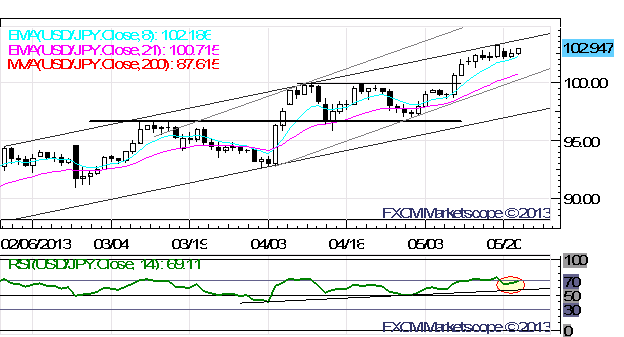 USDJPY: Yesterday I said that “pressure is back upwards ahead of the BoJ Rate Decision and Fed events on Wednesday.” Certainly, the USDJPY is testing the highs again, trading just short of ¥103.00. While gains may be stifled momentarily by 103.25/50, it is possible that a blowout leads to a great move towards the mid-106.00s. As for support, that “comes in at 102.20, while there have been a notable amount of bids as the USDJPY has traded into the 101.80s. Should this bottom floor break, a deeper pullback towards 101.10/40 and 100.30 will be eyed.” 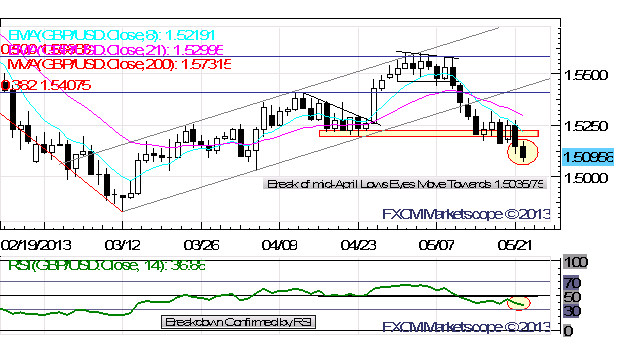 GBPUSD: Yesterday I said: “An Inside Day capped by the 8-EMA suggests that yesterday was merely a pause in the downtrend rather than a reversal. Today, the GBPUSD is back pressuring last week’s lows. With price holding below the $1.5200/20 region I was watching last week, a move towards the early-April lows at 1.5035/75 now eyed….with daily RSI support cracked, the plan is to sell rallies.” Spurred by weak UK consumption data, the GBPUSD has now sliced through 1.5100 and is well on its way towards the psychologically significant 1.5000 level. Big picture: the GBPUSD may have initiated a Bear Flag that eyes a sell-off into 1.4200, in conjunction with the Double Top off of 1.6300 that has similar implications.” 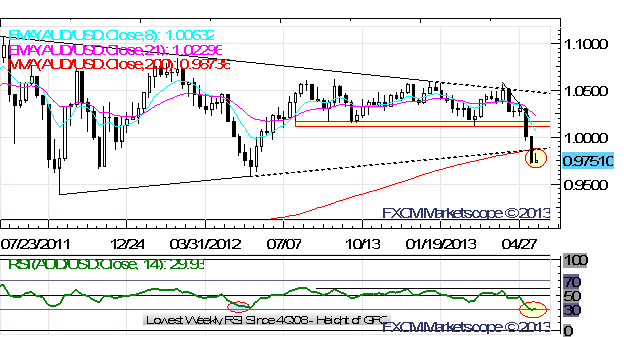 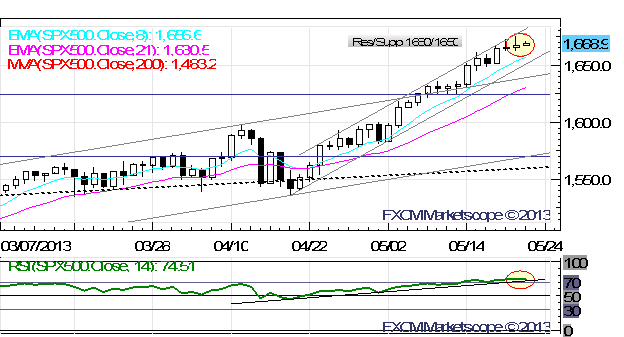 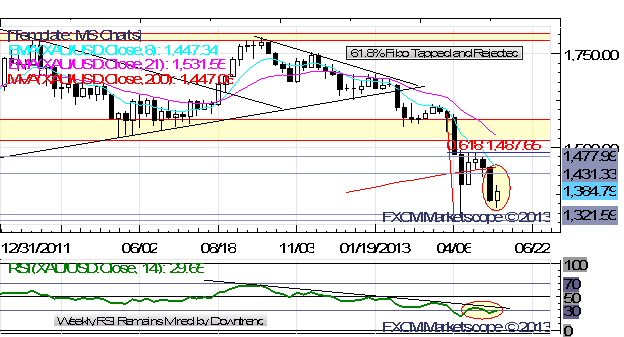