First Down Day for US Dollar Since Day Before USD/JPY Broke ¥100.00

The US Dollar has been undeniably the most attractive currency over the past several weeks, and through Friday’s close, it was neck-and-neck with the Euro as the top major performer in the 2Q’13 (EURJPY +8.85%, USDJPY +8.71%). On the flipside, the Asian-Pacific currencies, the Australian and New Zealand Dollars as well as the Japanese Yen, have depreciated quite substantially in a short period of a time (for the commodity currencies in this group, the losses accelerated only in May).

Thanks to overextended conditions in the Dow Jones FXCM Dollar Index (Ticker: USDOLLAR) – the highest daily and weekly RSIs since the early-March top – and several psychologically significant figures hit in the components of the index over the past week (AUDUSD $0.9700, EURUSD $1.2800, GBPUSD $1.5100, USDJPY ¥103.00), there is now some scope for profit taking in the world’s reserve currency. Certainly, given the mixed batch of secondary US data last week and with two major Federal Reserve events on the docket this week – Chairman Ben Bernanke testifies early on Wednesday, with the May FOMC meeting Minutes releases later in the day – there is scope for a pause in the recent US Dollar surge.

Last night presented some very interesting trading conditions that might have helped stoke the turnaround in the buck, with Japanese Economic Minister Akira Amari saying that the excessive strength seen in the Yen the past several years has been “largely corrected.” This is a notable shift in his stance the past several weeks, that it would be inappropriate to discuss specific exchange rates. Regardless, the bottom line is that Japanese policymakers aren’t deaf to the calls that a weak Yen could have negative implications as well, such as higher energy costs, and that ‘Abenomics’ could put significant upside pressure on Japanese sovereign debt (JGBs). This could be a poignant counterpoint to Yen weakness in the near-term. 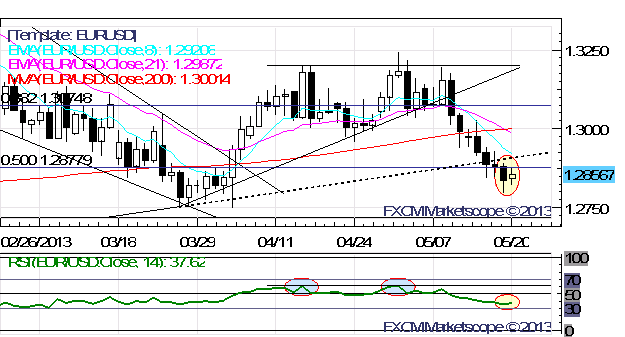 EURUSD: While the Inside Day noted Friday evolved into a Bearish Piercing Candle, an Inside Day today has price struggling to retake the important $1.2875/80 level. I maintain that “now that price has closed below the late-April swing low at 1.2950/60, there’s significant evidence in place to suggest that a test of the 2013 lows may be around the corner, with sellers eying 1.2740/50 to the downside.” This week may offer respite just yet, given the expected uptick in European data, and uncertainty revolving around the various Fed events. 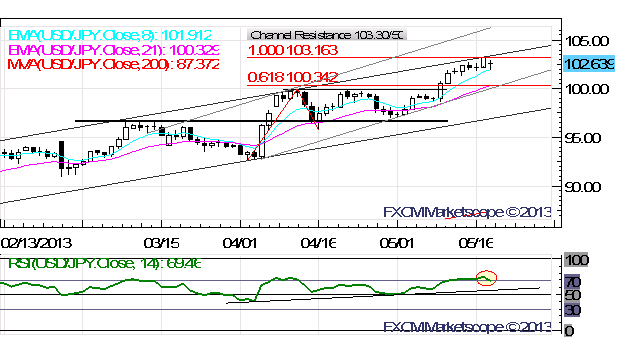 USDJPY: A close above ¥103.00 on Friday saw price meet the 100% Fibonacci extension off of the April 2 low, the April 11 high, and the April 16 low, at 103.16. Price gapped lower to start the week and even traded lower below 102.00, but it appears that was merely a symptom of thin liquidity. With Japanese data improving and the US Dollar exhausted, a pause in the uptrend may be upon us. Near-term support comes in at 102.20, while there have been a notable amount of bids as the USDJPY has traded into the 101.80s. Should this bottom floor break, a deeper pullback towards 101.10/40 will be eyed.. 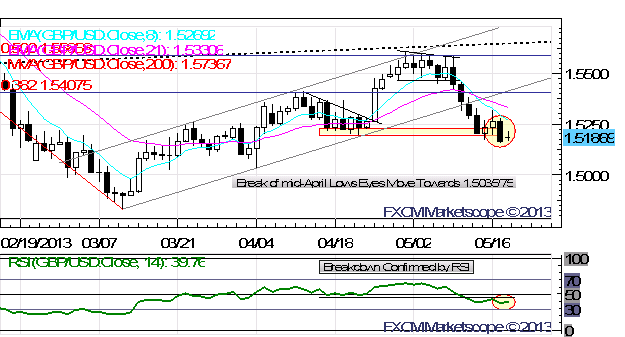 GBPUSD: Price closed below the 1.5200/20 region I was watching last week, with a move towards the early-April lows at 1.5035/75 now eyed. Although the US Dollar is generally weaker today, no upward movement in the GBPUSD speaks to the desire of traders to continue selling. As such, with the April swing lows broken and daily RSI support cracked, the plan is to sell rallies. Big picture: the GBPUSD may have initiated a Bear Flag that eyes a sell-off into 1.4200, in conjunction with the Double Top off of 1.6300 that has similar implications. 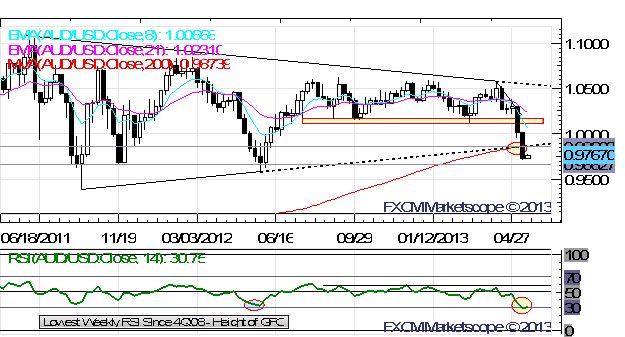 AUDUSD: The AUDUSD closed below the key 0.9860 level last week, ascending channel support off of the October 2011 and June 2012 lows, as well as the weekly 200-DMA. That is to suggest that a top in the pair back to the July 2011 high at 1.1079 is in place, though I’d prefer for a monthly close below 0.9860/900 for better confirmation. Now, a deeper pullback towards 0.9580 and 0.9380/400 is beginning. In the very near-term, with the weekly RSI at the lowest level since the height of the global financial crisis in the 4Q’08, the AUDUSD is probably close to a point of near-term exhaustion. Rebounds should be sold. 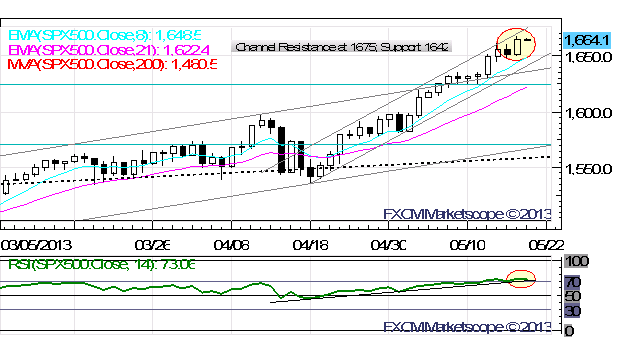 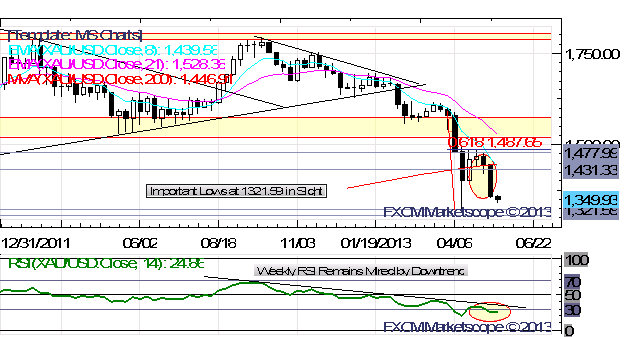