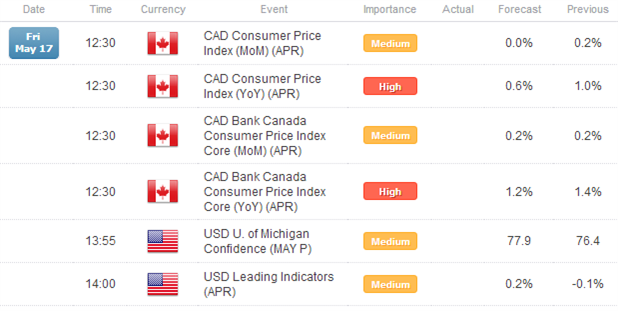 US Dollar Consolidates with Inside Days against Euro, Sterling, and Yen

The explosive strength of the US Dollar appears to be at a near-term breathing point, with the 5-day rate of change in the Dow Jones FXCM Dollar Index (Ticker: USDOLLAR) slowing the past few days from +2.18% on Wednesday to +1.17% today. The “brakes” are being pressed amid several major pairs, the EURUSD, the GBPUSD, and the USDJPY, forming Inside Days, typically a sign of pause in trend. However, while we wait to see whether or not this is a breather before a continuation next week for the US Dollar, there are a few things worth considering.

Yesterday, the late-day US Dollar rebound (following weaker than expecting housing, inflation, and labor data) came on the back of San Francisco Fed President John Williams suggesting that “good news” on the employment front could mean that the Fed “could reduce somewhat the pace of [our] securities purchases, perhaps as early as this summer…then, if all goes as hope, we could end the purchase program sometime later this year.”

At this point in time, Williams is now the fourth Fed member (albeit non-voting) to call for the beginning of the QE3 taper sometime around midyear, and with the June 19 Fed meeting around the corner – the quarterly meeting that comes with a Bernanke press conference and revised economic forecasts – we’re likely to hear a more definitive stance on the issue from the only Fed voice that really matters shortly. Because the optimism about the US economy is still in its early stages, and there remains a significant fiscal drag, any changes in the Fed’s QE3 policy, in my opinion, will come after the Jackson Hole Economic Policy Symposium in August; the September FOMC meeting should be monumental. 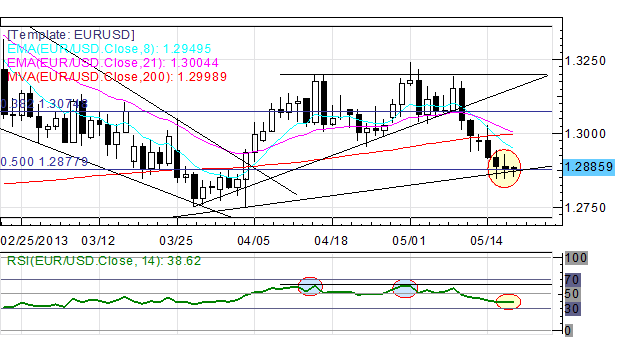 EURUSD: No change as a second consecutive Inside Day forms: “price has indeed fallen to and through the important $1.2875/80 level. Now that price has closed below the late-April swing low at 1.2950/60, there’s significant evidence in place to suggest that a test of the 2013 lows may be around the corner, with sellers eying 1.2740/50 to the downside.” The EURUSD continues to work on basing near the significant level that is the 50% Fibonacci retracement on the July 2012 low to the February 2013 high at 1.2875/80. The near-term bearish bias holds so long as price does not exceed 1.2940/50. 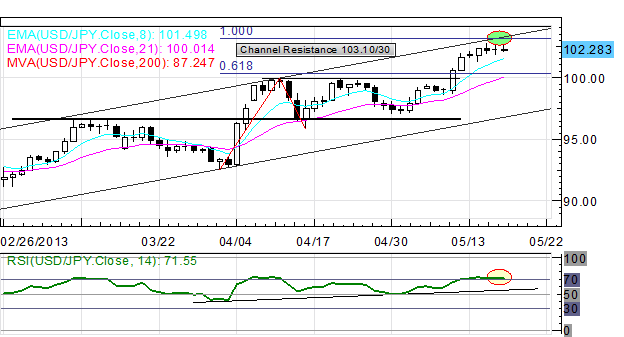 USDJPY: The pair continues to steady above ¥102.00, it too working on an Inside Day, as price sorts itself out of what could be a bullish continuation pattern on the 1H and 4H timeframes. Accordingly, near-term support comes in at 102.20, while there have been a notable amount of bids as the USDJPY has traded into the 101.80s. Should this bottom floor break, a deeper pullback towards 101.10/40 will be eyed. A break of the congestion top at 102.60/80 could lead to a sharp rally towards 103.10/30. 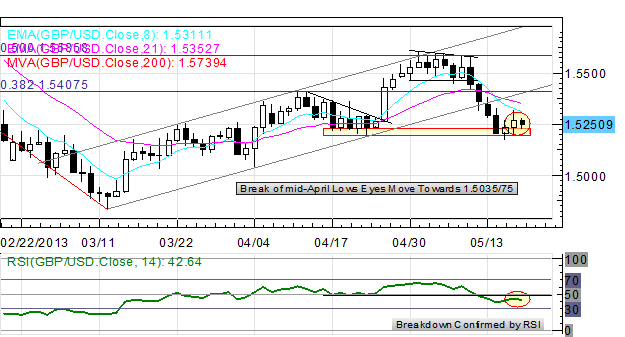 GBPUSD: On Tuesday I said: “The GBPUSD slidehas continuedafter falling below the ascending channel support off of the March 12 and April 4 lows is at $1.5350/75. It is worth noting that the RSI uptrend that’s supported the rally since early-March has failed, additional failure below the 47 level (a floor in April) suggests that price could continue to fall towards 1.5200/20 before support is found. Despite a brief dip below, price has steadied in the 1.5200/20 region. A daily close this area suggests a move towards the early-April lows at 1.5035/75.” An Inside Day today draws into question the rebound off of the 1.5200/20, and with price respecting the declining 8-EMA as resistance presently, I am neutral as long as price remains between 1.5170 and 1.5325. 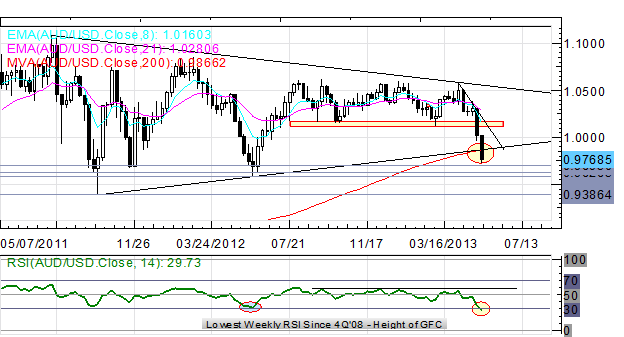 AUDUSD: No change: “The pair finds itself at critical trendline support off of the 2011 and 2012 lows at 0.9860, also the weekly 200-SMA. A break here would confirm a top in the pair back to the July 2011 high at 1.1079, and suggest that a deeper pullback towards 0.9580 and 0.9380/400 is beginning.” Price has tentatively broken this week, though with the weekly RSI at the lowest level since the height of the global financial crisis in the 4Q’08, the AUDUSD is probably close to a point of near-term exhaustion. Rebounds should be sold. 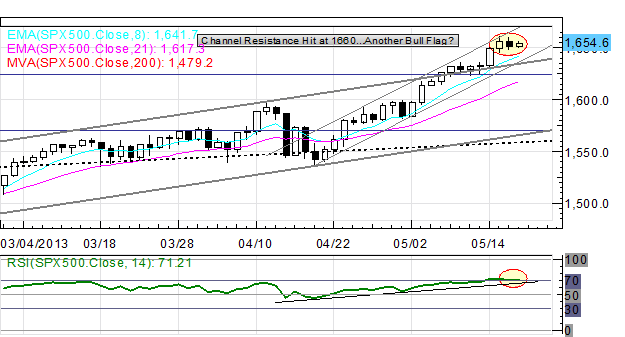 S&P 500: No change as another Bull Flag forms following channel resistance being hit at 1660: “The headline index remains strong although there is some theoretical resistance coming up (this is unchartered territory, so forecasting price relies heavily on valuations, mathematical relationship, and pattern analysis)…It’s hard to be bearish risk right now, but it is worth noting that the divergence between price and RSI continues, suggesting that few new hands are coming into the market to support price (recent volume figures would agree).” Channel resistance from mid-April comes in at 1670, while support is at 1625 and 1642 (8-EMA). 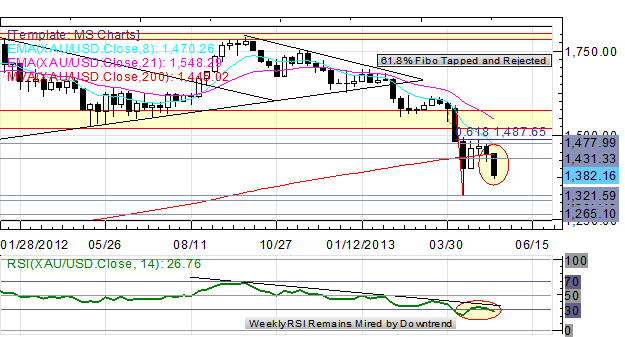