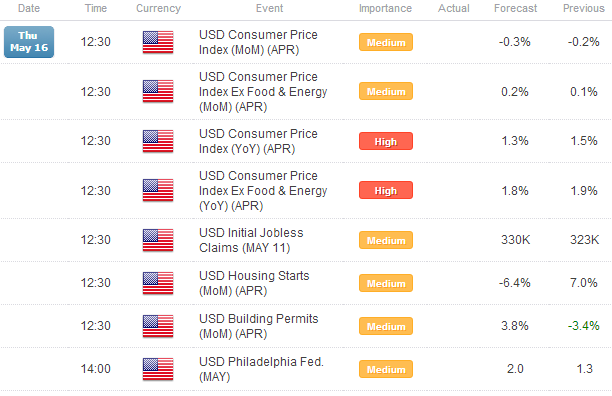 The commodity currency bloc continued its tumble versus the European currencies and the US Dollar overnight, with the Australian and New Zealand Dollar falling to multi-month lows as investors continued to pile into antipodean sovereign debt, driving yields lower. Sparked by a rate cut by the Reserve Bank of Australia on Tuesday, May 7, and a less optimistic budget forecast that derided the Australian Dollar’s exchange rate as being too high, the AUDUSD has cut below major technical support at $0.9860 (weekly 200-SMA and uptrend off of the October 2011 and June 2012 lows), prompting necessary speculation that a long-term top – talking about several years here – may be developing.

Perhaps the most significant development overnight, at least in my opinion, was the release of the 1Q’13 Japanese GDP report, which cruised by expectations at +3.5% annualized versus +2.7% expected. While this may be a ringing endorsement of ‘Abenomics,’ I believe it speaks volumes about market expectations for Japan that the Yen is weaker on the day versus the US Dollar. Essentially, if the collective market opinion was that this GDP print was enough to scale back easing expectations, the Yen would have rallied.

Continued capital outflow from Japan is likely to be a major driver of Yen weakness going forward. Data also released last night showed that the emerging trend of Japanese investors purchasing foreign debt continued. After consistently selling foreign bonds since January 2010, Japanese investors purchased +¥186.4B of foreign bonds in the week ending May 10, after soaking up +¥301.2B in the week ending May 3, and +¥204.4B in the week ending April 26. As long as this trend continues, pressure on the Yen will be sustained. USDJPY could track towards 110.10 by mid-3Q’13. 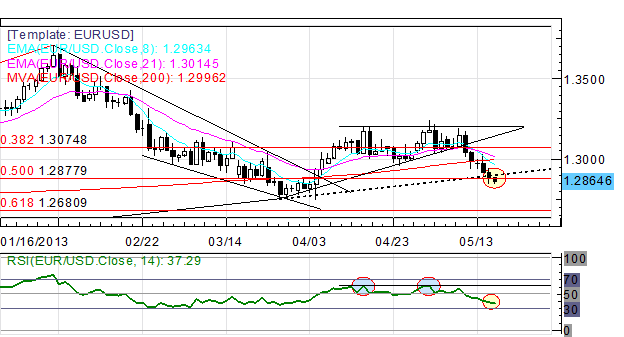 EURUSD: No change as “price has indeed fallen to and through the important 1.2875/80 level. Now that price has closed below the late-April swing low at 1.2950/60, there’s significant evidence in place to suggest that a test of the 2013 lows may be around the corner, with sellers eying 1.2740/50 to the downside.” Today, an Inside Day is forming thus far, and given the significant level that it is forming near- the 50% Fibonacci retracement on the July 2012 low to the February 2013 high at 1.2875/80 – it is possible that some near-term basing might be trying to work itself out. The near-term bearish bias holds so long as price does not exceed 1.2895/900. 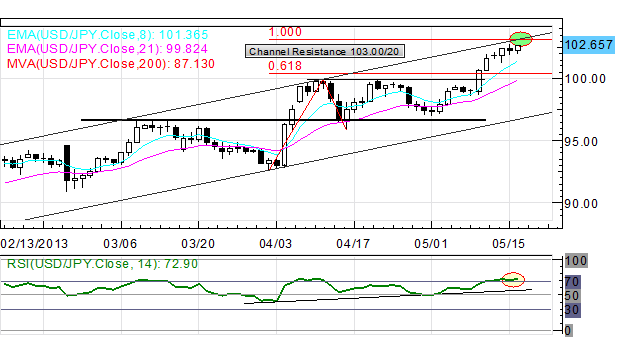 USDJPY: No change as the pair approaches ¥103.00: “I like USDJPY higher now that US data has started to improve, and a move above 99.95 would warrant a long entry in the pair for a quick move towards 102.00…The break of 99.95 has led to a sharp move up into the mid-101.00s, and at the time of writing, the pair had surged above 102.00 earlier today.” Further buying after the 1Q’13 Japanese GDP report suggests that there still may be some upside yet before a meaningful correction – channel resistance is at 103.00/20. 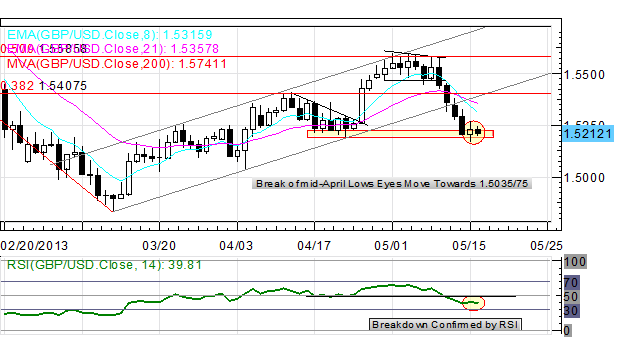 GBPUSD: On Tuesday I said: “The GBPUSD slidehas continuedafter falling below the ascending channel support off of the March 12 and April 4 lows is at $1.5350/75. It is worth noting that the RSI uptrend that’s supported the rally since early-March has failed, additional failure below the 47 level (a floor in April) suggests that price could continue to fall towards 1.5200/20 before support is found. Despite a brief dip below, price has steadied in the 1.5200/20 region. A daily close this area suggests a move towards the early-April lows at 1.5035/75.” 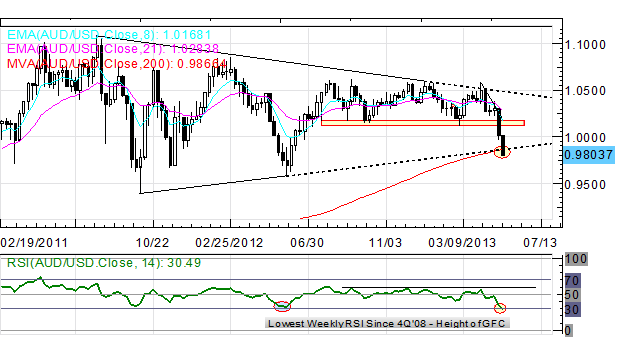 AUDUSD: No change: “The pair finds itself at critical trendline support off of the 2011 and 2012 lows at 0.9860, also the weekly 200-SMA. A break here would confirm a top in the pair back to the July 2011 high at 1.1079, and suggest that a deeper pullback towards 0.9580 and 0.9380/400 is beginning.” Price has tentatively broken today, though with the weekly RSI at the lowest level since the height of the global financial crisis in the 4Q’08, the AUDUSD is probably close to a point of near-term exhaustion. 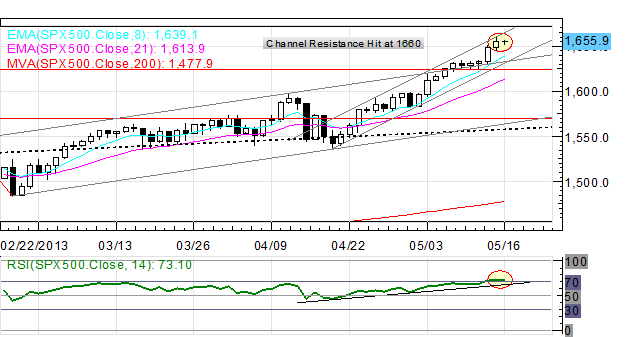 S&P 500: No change as the Bull Flag plays out as channel resistance is hit at 1660: “The headline index remains strong although there is some theoretical resistance coming up (this is unchartered territory, so forecasting price relies heavily on valuations, mathematical relationship, and pattern analysis)…It’s hard to be bearish risk right now, but it is worth noting that the divergence between price and RSI continues, suggesting that few new hands are coming into the market to support price (recent volume figures would agree).” Channel resistance from mid-April comes in at 1660, while support is at 1625 and 1632 (8-EMA). 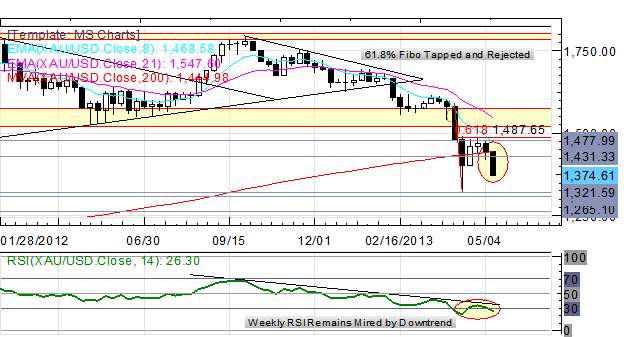