Another round of new 2013 highs for the Dow Jones FXCM Dollar Index (Ticker: USDOLLAR) comes on the back of disappointing 1Q’13 European growth data, showing that the region’s slump has accelerated in the core countries and is getting worse, not better. Earlier today, French, German, Italian, and broad Euro-zone GDP reports were issued, and not a single aspect of any report – neither the quarterly nor the yearly readings – beat expectations. The biggest disappointment, of course, has to be Germany, which saw the economy grow at +0.1% q/q, but contract by -0.2% y/y (w.d.a.; the n.s.a. reading was -1.4% y/y).

Although the European Central Bank cut its benchmark interest rate to a historic low of 0.50% two weeks ago, there is little policy signaling otherwise – but for the casual, ‘the ECB “stands ready to act,”’ bit from President Draghi. My belief is that the Euro-zone economy will continue to struggle through the middle of the year – another summer swoon for the Euro – in the lead up to the German election. German Chancellor Angela Merkel will not sacrifice any political capital until it’s clear her party has a majority after September, and in the case that she is forced to join a coalition, the likelihood for policy shifts, at least along the fiscal front, is diminished. We might see another rate cut by the ECB between now and then, but if the region’s policy transmission mechanism is truly broken, only a wave of QE (or some form of opening up the balance sheet for SME lending) and fiscal stimulus – coordinated policy action – will help the region.

Elsewhere, the Australian Dollar continues to erode, with the AUDUSD falling into crucial support, the weekly 200-SMA and ascending trendline support off of the October 2011 and June 2012 lows at $0.9860. A break of this level would be monumental, and signal a broad topping pattern in the AUDUSD going back to the July 2011 high at 1.1079. 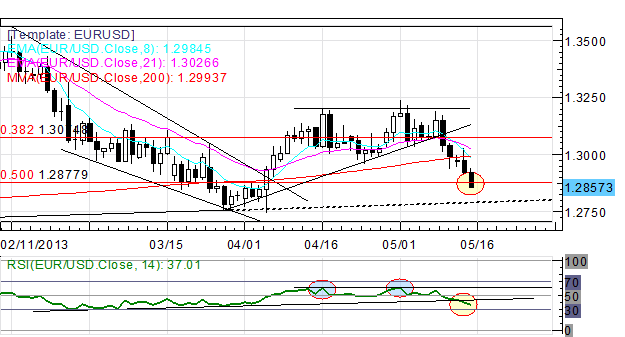 EURUSD: Yesterday I said “There’s a potential for a Bearish Key Reversal today (misplaced though) should price close below $1.2943, signaling a deeper pullback towards the 50% Fibonacci retracement off of the July 2012 low and February 2013 high at 1.2875/80.” After the Bearish Key Reversal yesterday, price has indeed fallen to and through the important 1.2875/80 level. Now that price has closed below the late-April swing low at 1.2950/60, there’s significant evidence in place to suggest that a test of the 2013 lows may be around the corner, with sellers eying 1.2740/50 to the downside. 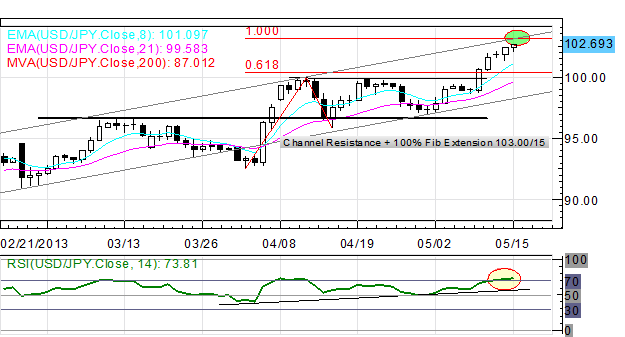 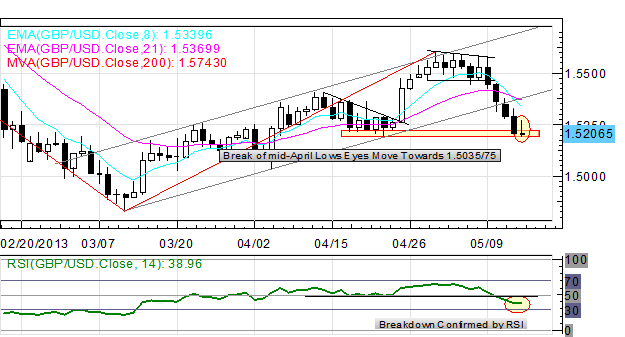 GBPUSD: Yesterday I said: “The GBPUSD slidehas continuedafter falling below the ascending channel support off of the March 12 and April 4 lows is at $1.5350/75. It is worth noting that the RSI uptrend that’s supported the rally since early-March has failed, additional failure below the 47 level (a floor in April) suggests that price could continue to fall towards 1.5200/20 before support is found.” Despite a brief dip below, price has steadied in the 1.5200/20 region. A daily close this area suggests a move towards the early-April lows at 1.5035/75. 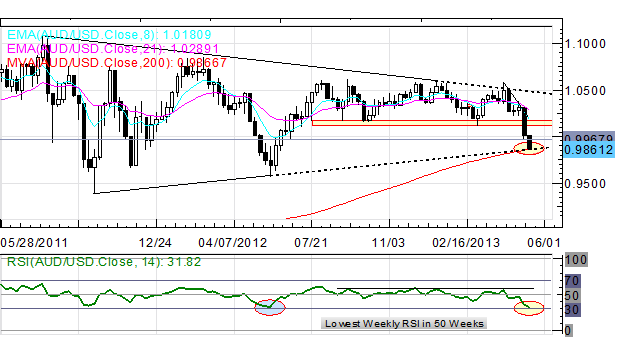 AUDUSD: The AUDUSD has hit my target for shorting the pair, much earlier than I anticipated, as the Australian Dollar is in the midst of its worst streak in at least twenty years, having fallen for eight consecutive days now. The pair finds itself at critical trendline support off of the 2011 and 2012 lows at 0.9860, also the weekly 200-SMA. A break here would confirm a top in the pair back to the July 2011 high at 1.1079, and suggest that a deeper pullback towards 0.9580 and 0.9380/400 is beginning. 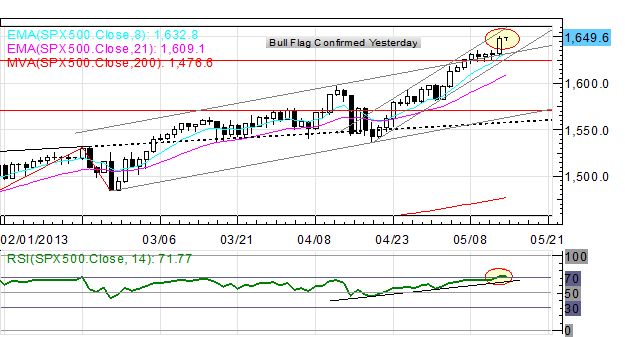 S&P 500: No change as the Bull Flag plays out: “The headline index remains strong although there is some theoretical resistance coming up (this is unchartered territory, so forecasting price relies heavily on valuations, mathematical relationship, and pattern analysis)…It’s hard to be bearish risk right now, but it is worth noting that the divergence between price and RSI continues, suggesting that few new hands are coming into the market to support price (recent volume figures would agree).” Channel resistance from mid-April comes in at 1660, while support is at 1625 and 1632 (8-EMA). 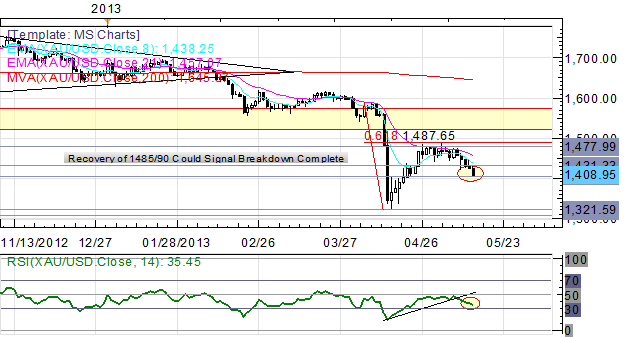 GOLD: No change: “If the US Dollar turns around, however (as many of the techs are starting to point to), then Gold will have a difficult gaining momentum higher.” Indeed this has been the case, with Gold failing to reclaim the 61.8% Fibonacci retracement of the April meltdown at $1487.65, only peaking above it by 35 cents for a moment a few weeks ago.