After explosive gains the past two days that saw the Dow Jones FXCM Dollar Index (Ticker: USDOLLAR) higher by approximately +1.50%, a slight breather is in order and that is exactly what’s transpiring today. But for the Australian and New Zealand Dollars, the rest of the majors are trading within a +/-0.09% band against the greenback, with the British Pound and the Japanese Yen – two of the harder hit currencies at the end of last week – leading the pack.

In regards to the USDJPY, we have our first official rejection of ¥102.00, just two days after 100.00 cracked (and that took several weeks). Commentary from the G7 meeting was roundly supportive of Japan’s policies, with the Japanese envoy declaring victory upon leaving London, gleefully noting that no G7 member was opposed to the country’s aggressive and fiscal easing policies that have sent the Yen lower by -20% to -30% against the other major currencies. If the Yen continues to weaken at its current pace, the G7 is likely to change its tune – but for now, there’s little exogenous pushback.

With respect to the Australian Dollar’s continued struggles, further soft data out of China overnight paved the way for further weakness, as the AUDUSD had rallied back to $1.0000 in the minutes before the significant April data were released. Despite Retail Sales meeting expectations, the miss in Industrial Production fueled further concerns that the commodity “supercycle” may be ending. I remain bearish and short AUDUSD following the RBA’s historic rate cut last week. 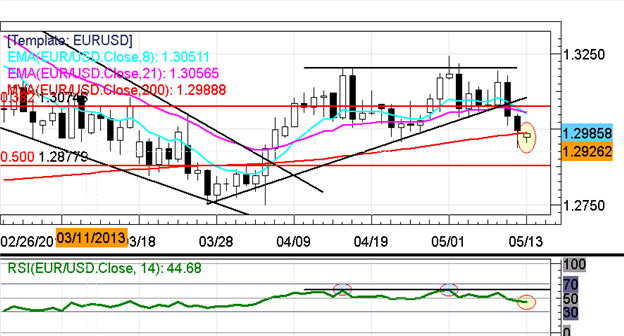 EURUSD: An Inside Day is being formed after Friday produced a continuation of the break of the uptrend off of the March and April lows. Price has been sustained below $1.3000, with the 200-DMA at 1.2985/90 serving as intraday resistance. Should price close below the late-April swing low at 1.2950/60, there is light support in play until the 50% Fibonacci retracement off of the July 2012 low and February 2013 high at 1.2875/80. 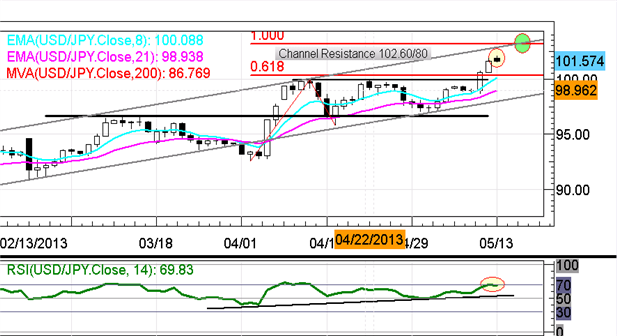 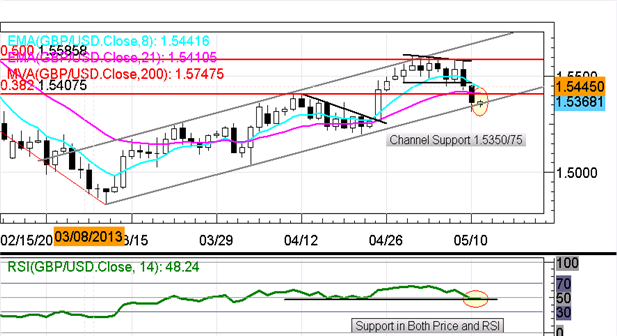 GBPUSD:The GBPUSD has slid sharply since the Bank of England’s policy meeting on Thursday, falling below the mid-April swing highs at 1.5400/20. Ascending channel support off of the March 12 and April 4 lows is at 1.5350/75 and has held up thus far. It is worth noting that the RSI uptrend that’s supported the rally since early-March has failed, and that additional failure below the 47 level (a floor in April) suggests that a new leg of weakness may be emerging. 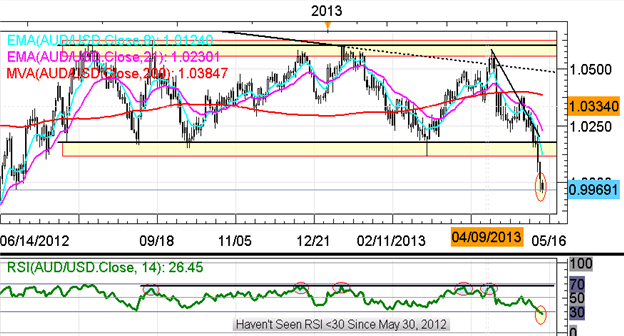 AUDUSD: The AUDUSD continues to falter as market participants remain focused on the renewed easing cycle that the RBA has entered. Between the RBA’s rate cut on Tuesday and the decision to lower the 2013 growth and inflation forecasts on Friday, the AUDUSD has held below $1.0000 despite several attempts to reclaim the psychologically significant figure today. I’m bearish and short from 1.0150. 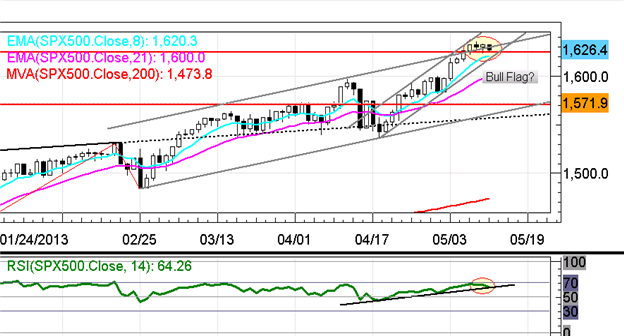 S&P 500: No change as a potential Bull Flag forms: “The headline index remains strong although there is some theoretical resistance coming up (this is unchartered territory, so forecasting price relies heavily on valuations, mathematical relationship, and pattern analysis). As first noted in mid-April, 1625 should be a big figure where sellers come in: channel resistance off of the February 25 and April 18 lows (drawn to the April 11 high) aligns neatly with the 100% Fibonacci extension off of the December 28 (fiscal cliff) and February 25 (Italian election) lows. It’s hard to be bearish risk right now, but it is worth noting that the divergence between price and RSI continues, suggesting that few new hands are coming into the market to support price (recent volume figures would agree).” 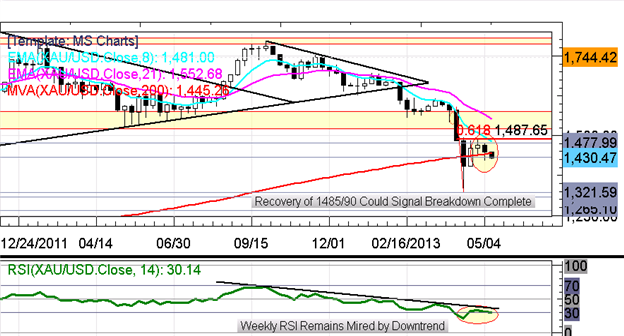