The Dow Jones FXCM Dollar Index (Ticker: USDOLLAR) is in the midst of one of its best upswings of the year, gaining over +1.50% since the European Central Bank meeting on Thursday. However, the Euro is not the catalyst for the gains seen by the world’s reserve currency. Those honors go to the trio of major Asian-Pacific currencies, the Australian and New Zealand Dollars, and the Japanese Yen.

The Australian Dollar is back on the decline after the Reserve Bank of Australia cut its inflation forecast for 2013, saying that price pressures will remain “below trend,” towards +2.0% y/y ending in December 2013 as opposed to the +3.0% y/y forecast provided at the start of the year. Similarly, the RBA pegged down the growth forecast at +2.5% y/y for 2013, below the upper range of +3.0% y/y previously forecasted. The dominoes are starting to fall in place for a weaker AUDUSD the next several weeks and months, in light of the RBA’s rate cut on Tuesday.

The big mover that everyone has been watching the past 16 hours or so has been the Japanese Yen, which weakened to its lowest exchange rate in four years against the US Dollar yesterday, after trading above ¥100.00. While the selling started late in the US session yesterday, traders happily jettisoned the Yen overnight after government data showed that domestic investors were buying up overseas bonds in droves. After consistently selling foreign bonds since January 2010, Japanese investors purchased +¥204.4B of foreign bonds in the week ending April 26, and +¥309.9B in the week ending May 3.

Clearly, this is a result of ‘Abenomics’ or the Bank of Japan’s ultra-easing policy: with yields nonexistent in Japan, investors are forced to search for yield elsewhere, driving down the value of the Yen while boosting currencies with highly-rated sovereigns like the US Dollar. With the new trend developing, the next leg of Japanese Yen weakness has begun – I expect USDJPY to rally towards 103.00 by the end of May. 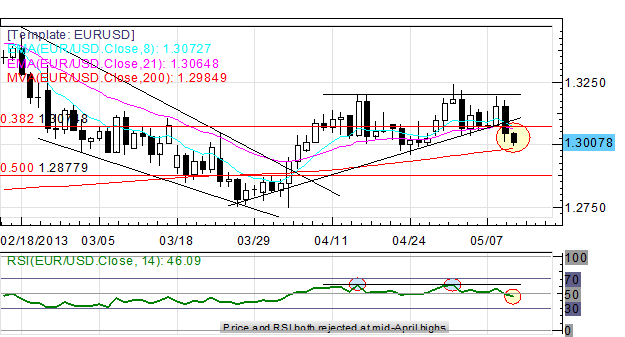 EURUSD: The uptrend off of the March and April lows broke yesterday with fervor, and further downside pressure today has the EURUSD well on its way towards 1.3000 and below. As I noted earlier this week, “I have a bearish bias…a print above 1.3245 would negate the bearish bias, while a move below 1.3030 (last week’s low) should spur further selling.” Further selling indeed, as the EURUSD moves towards its 200-DMA at 1.2985, which opens up the floor for a move towards 1.2955/60. Should price close below the late-April swing low, there is light support in play until the 50% Fibonacci retracement off of the July 2012 low and February 2013 high at 1.2875/80. 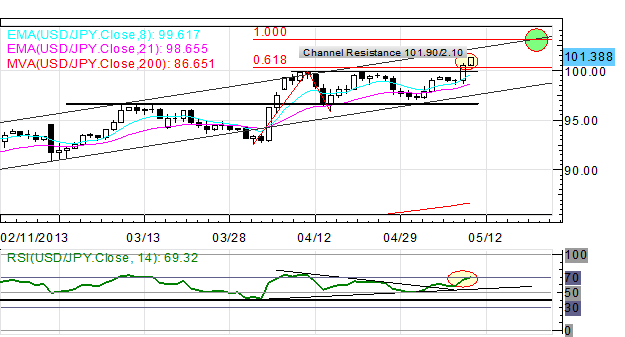 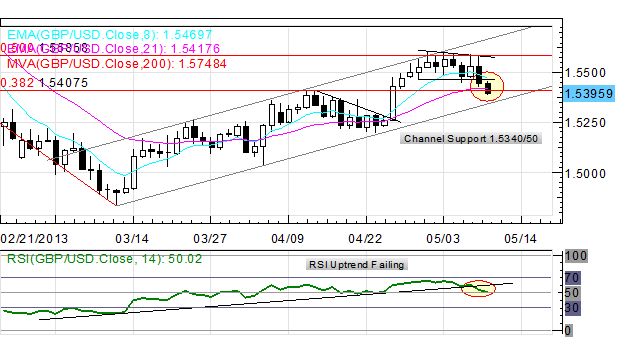 GBPUSD: The GBPUSD has slid sharply since the Bank of England’s policy meeting yesterday, falling below short-term congestion support at 1.5475/500 yesterday, and sliding into the mid-April swing highs at 1.5400/20. While I’ve previously said that this may be “worth a look from the long side” near 1.5400, with US Dollar strength quite rampant, a better entry point is defined by ascending channel support off of the March 12 and April 4 lows at 1.5340/60. It is worth noting that the RSI uptrend that’s supported the rally since early-March has failed, suggesting that a new leg of weakness may be emerging, and that the ascending channel may break soon. 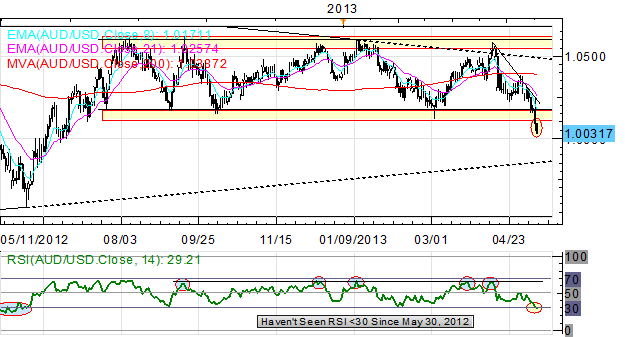 AUDUSD: The AUDUSD has been crushed the past few days as market participants have overlooked the strong April Australian labor market reading, and instead are focusing on the renewed easing cycle that the RBA has entered. Between the RBA’s rate cut yesterday and the decision to lower the 2013 growth and inflation forecasts, the AUDUSD has slipped below range support at 1.0110, dating back to last July. Now, a test of parity is in line, which would be the first such appearance of a sub-1.0000 exchange rate since June 28, 2012. I’m bearish and short from 1.0150. 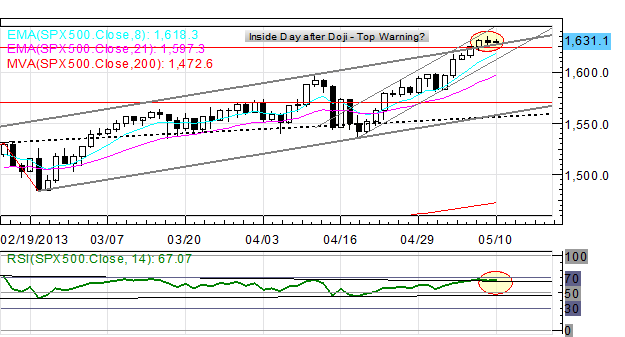 S&P 500: No change as an Inside Day forms after a Doji yesterday – is this an early topping sign?: “The headline index remains strong although there is some theoretical resistance coming up (this is unchartered territory, so forecasting price relies heavily on valuations, mathematical relationship, and pattern analysis). As first noted in mid-April, 1625 should be a big figure where sellers come in: channel resistance off of the February 25 and April 18 lows (drawn to the April 11 high) aligns neatly with the 100% Fibonacci extension off of the December 28 (fiscal cliff) and February 25 (Italian election) lows. It’s hard to be bearish risk right now, but it is worth noting that the divergence between price and RSI continues, suggesting that few new hands are coming into the market to support price (recent volume figures would agree).” 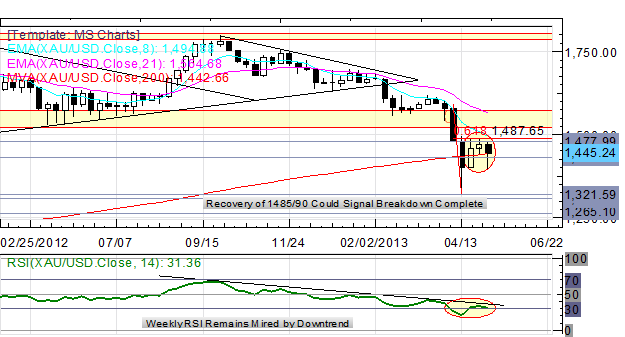