The plight of traders in today’s central bank driven investing environment is perfectly illustrated by what has happened with the Australian and New Zealand Dollars the past several days. Both commodity currencies have seen their fair share of mixed data the past several weeks, but in an environment in which yields are constantly pressured lower thanks to monetary policies increasingly geared towards the zero rate boundary, the Aussie and the Kiwi still manage to find residual appeal thanks to their relative high yield (especially compared to the Japanese Yen or the US Dollar).

Thus, today’s scoreboard is that much more interesting because until today, the Aussie and the Kiwi are two of the worst performing currencies in May. Let’s put the labor market readings for Australia and New Zealand in context, as they were much better than expected, as was the Chinese CPI reading for April. Is growth slowing dramatically in either country? No. Are the labor markets as weak as previously thought? No. Is deflation an issue in either country? No. Then what’s the deal with the RBA’s 25-bps rate cut and the RBNZ’s verbal intervention efforts? The answer is clear: these policymakers have jumped two-feet into the festering “currency war,” and despite fundamentals that might suggest otherwise, they fully intend on standing as an impediment to further gains by the antipodean currencies.

Elsewhere, a look at the Euro and the Sterling shows that enthusiasm for the European currencies is tepid on the day, with the Bank of England policy meeting resulting in little positive momentum for the British Pound. Outside of the commodity currencies, the rest of the majors have been relatively subdued around the US Dollar this week, something we expect to continue until a new fundamental catalyst – perhaps the USD Advance Retail Sales (APR) report on Monday (-0.3% expected from -0.4% m/m). 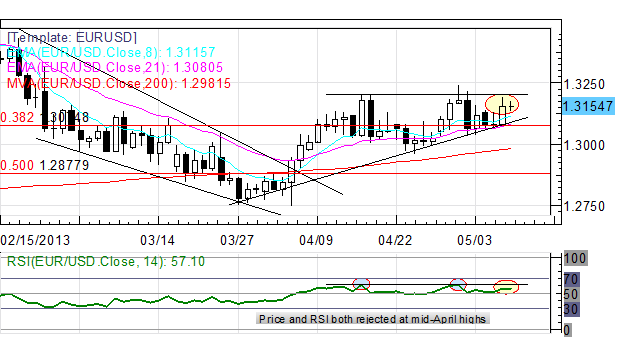 EURUSD: A small Doji forming today with prices fading as the US session approaches keeps the neutral tone intact for now. I suggested yesterday that there appeared to be an oddly placed Bullish Morning Star candle cluster forming in a less than ideal position, and it seems the lack of “true” timing has made this outcome less probable. Still, with key levels untouched, I maintain that “there’s clearly significant selling interest above 1.3200, as a Double Top has formed coinciding with price contained twice at the 66 level in RSI. The high for May came on the first trading day of the month (just like in February), so technically I have a bearish bias…a print above 1.3245 would negate the bearish bias, while a move below 1.3030 (last week’s low) should spur further selling.” 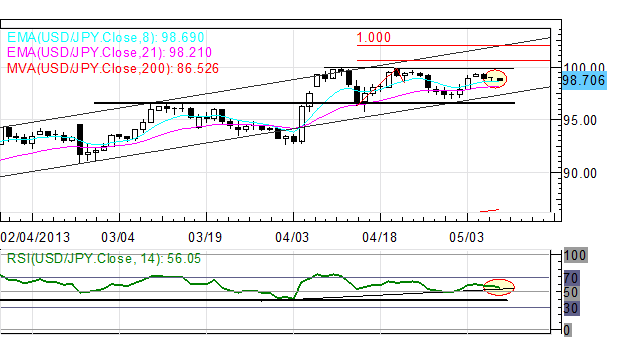 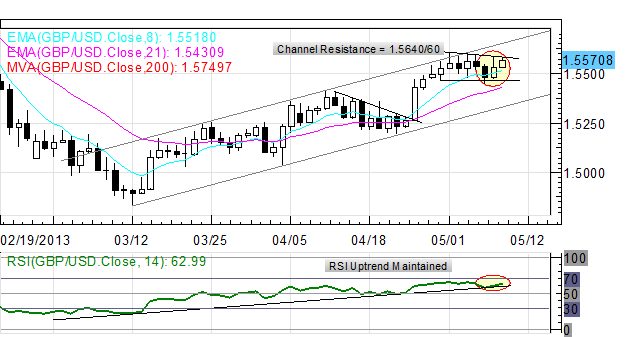 GBPUSD: No change: “The GBPUSD threatened to slip below congestion support at 1.5485/505 on Tuesday but has since posted a modest rebound, regaining position above the 8-EMA. Price no longer is holding near the top rail in the ascending channel that’s been in place off of the March 12 and April 4 lows; instead, it is resting in the middle of the channel. Although near-term momentum has turned higher for the Pound, rejuvenated US data could be the spark for a return towards channel support, likely found near 1.5400 (mid-April swing highs) by the end of next week. While channel support today comes in at 1.5330/50, a move towards these levels seems unlikely at present time. In either case, I’ll be watching for a move above 1.5600/10 or below 1.5475/500 before a trade is taken; and a sell-off towards 1.5400/20 is worth a look from the long side.” 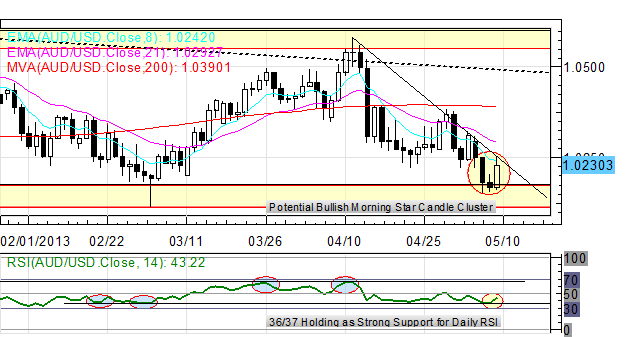 AUDUSD: Strong labor market data has stoked a reversal out of the critical 1.0110/75 zone, which has held as support on multiple tests since last July. However, the downtrend off of the April 11 and May 3 highs remains in place, with the AUDUSD failing at 1.0250 today. The near-term bearish bias would be negated if price trade above 1.0385, the topside limit of the Bearish Evening Star candle cluster from late-March. Concurrently, a Bullish Morning Star candle cluster may be forming today, initiated on a close >1.0205.The uptrend off of the June 2012 and March 2013 lows broke yesterday, suggesting a retest of 0.9850/900 (the mid-December 2011 swings lows and the ascending trendline off of the October 2011 and June 2012 lows) for the AUDUSD might be in the cards over the coming weeks. 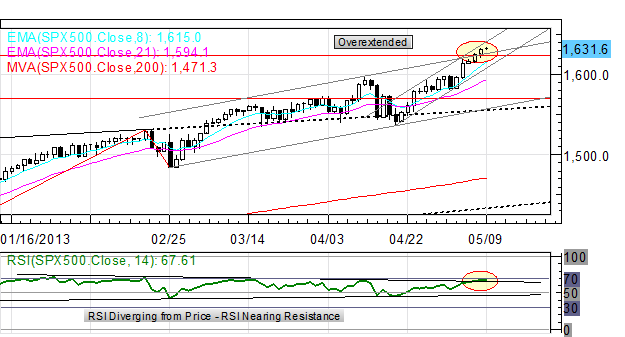 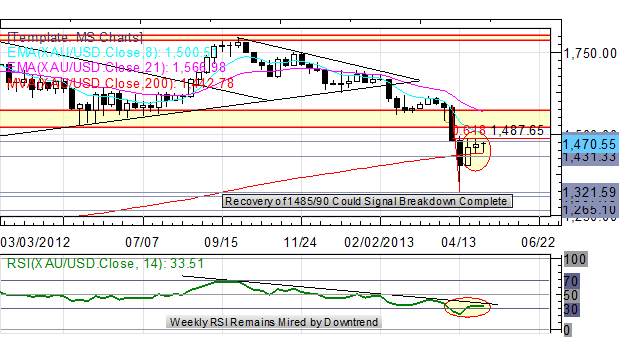