The past several days have been marked by nothing short of disgust for the antipodean currencies, and in May the Australian and New Zealand Dollars have been the worst two performing majors versus the US Dollar (AUDUSD -1.65%, NZDUSD -1.95%). While no one single data print can be blamed for the weakness, we can point to two assailants who have berated their currencies: the Reserve Bank of Australia and the Reserve Bank of New Zealand.

While the RBA’s rate cut decision has been widely covered, the actions taken by the RBNZ represent a more concerted effort on behalf of one of the smaller major central banks to fight currency’s appreciation. RBNZ Governor Graeme Wheeler, apparently after not finding the reaction he had hoped when he warned investors that the Kiwi wasn’t a “one way bet” in February, has issued a more formal stance on his currency’s rapid appreciation: the RBNZ is “on-the-record that it is prepared to intervene in the exchange rate.” With the commentary coinciding with a break of an ascending trendline off of the March and April lows, the NZDUSD looks like it could be poised for a run underneath 0.8300 in the coming weeks.

Elsewhere, and once again in Europe, investors are taking the bait on stronger than expected March German data, this time of the Industrial Production variety. The EURUSD has subsequently broken the threat of a three-consecutive Inside Days, but that doesn’t mean bearish sentiment is just going to up and dissipate. I maintain: “it is worth pointing out that a significant detractor from German firms’ competitive edge – the Japanese Yen’s weak exchange rate – truly didn’t materialize until late-March/early-April, when the Bank of Japan announced its full throttle easing policy. Thus, the impact of a higher EURJPY exchange…hasn’t been quite felt yet by exporters for a long period.” 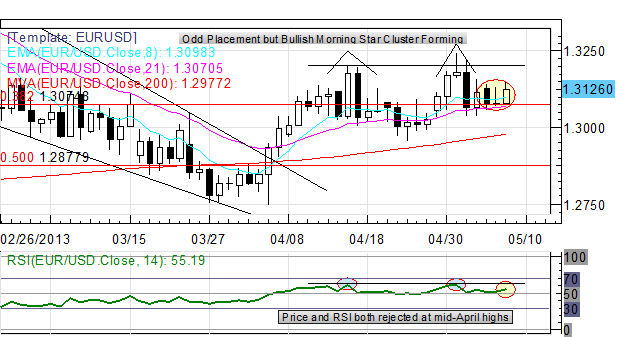 EURUSD: The triple Inside Day threat is gone and the EURUSD is breaking to the upside, laying the groundwork for what could be an oddly placed Bullish Morning Star candle cluster (ideally, these bullish reversal patterns form at a low, not in the midst of a sideways congestion). Still, with key levels untouched, I maintain that “there’s clearly significant selling interest above 1.3200, as a Double Top has formed coinciding with price contained twice at the 66 level in RSI. The high for May came on the first trading day of the month (just like in February), so technically I have a bearish bias…a print above 1.3245 would negate the bearish bias, while a move below 1.3030 (last week’s low) should spur further selling.” 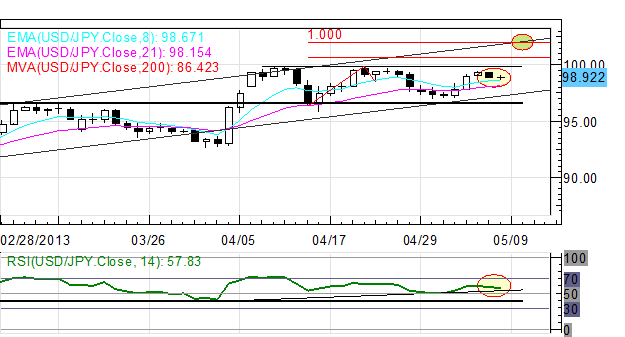 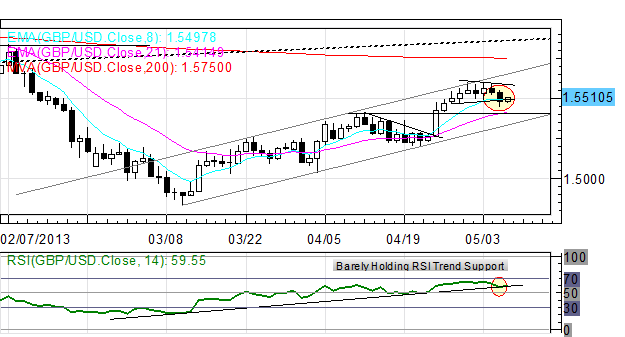 GBPUSD:The GBPUSD threatened to slip below congestion support at 1.5485/505 yesterday but has since posted a modest rebound, regaining position above the 8-EMA. Price no longer is holding near the top rail in the ascending channel that’s been in place off of the March 12 and April 4 lows; instead, it is resting in the middle of the channel. Although near-term momentum has turned higher for the Pound, rejuvenated US data could be the spark for a return towards channel support, likely found near 1.5400 (mid-April swing highs) by the end of next week. While channel support today comes in at 1.5330/50, a move towards these levels seems unlikely at present time. In either case, I’ll be watching for a move above 1.5600/10 or below 1.5475/500 before a trade is taken; and a sell-off towards 1.5400/20 is worth a look from the long side. 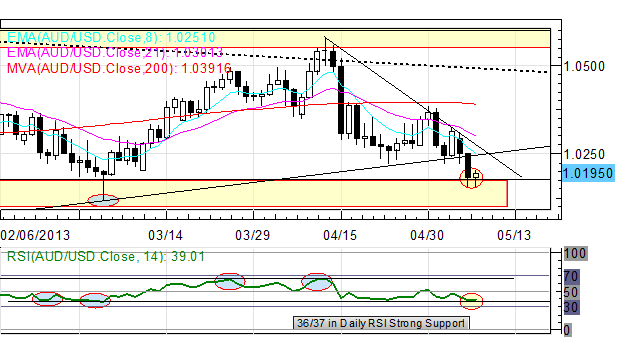 AUDUSD:The rate cut spurred a break of the 1.0200/20 level, and sellers have indeed been inspired to continue the push towards yearly lows just above 1.0100. The near-term bearish bias would be negated if price trade above 1.0385, the topside limit of the Bearish Evening Star candle cluster. Additionally, the uptrend off of the June 2012 and March 2013 lows broke today, suggesting a retest of 0.9850/900 (the mid-December 2011 swings lows and the ascending trendline off of the October 2011 and June 2012 lows) for the AUDUSD might be in the cards over the coming weeks. 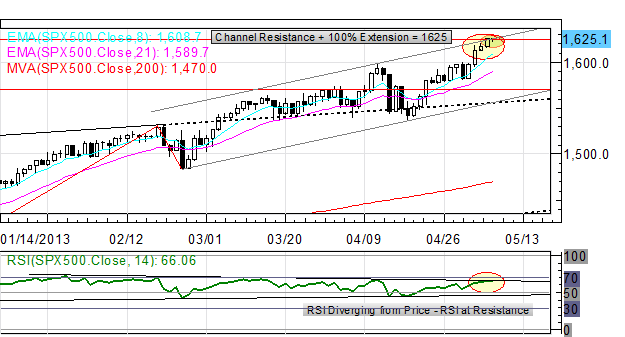 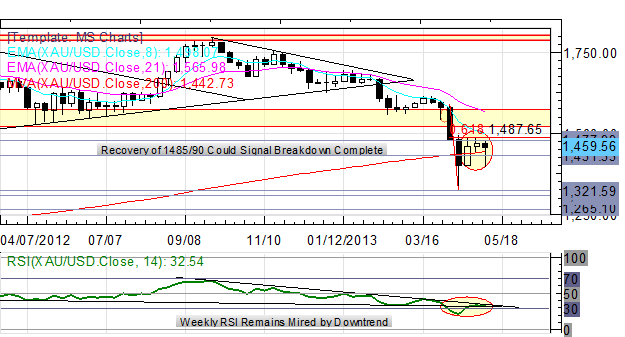