The Reserve Bank of Australia made history last night cutting its key benchmark interest rate to an all-time low at 2.75%, a 25-bps rate cut from 3.00% that generally surprised market participants. According to Bloomberg News, of the 29 economists surveyed, 21 had expected a hold; and the Credit Suisse Overnight Index Swaps were pricing in a 52% chance of a 25-bps cut. Needless to say, the bit of surprise has provoked some shuffling out of the Australian Dollar today, which has fallen to under $1.0200 against the US Dollar.

The timing of the RBA cut is interesting because of the data due this week: the May Chinese Trade Balance on Wednesday; April Australian labor market data on Thursday; and the April Chinese Consumer Price Index on Thursday. The RBA has tended to show its hand ahead of key data, as history shows. Back in June 2012, the RBA kept its key rate on hold despite an expectation for a 25-bps, and over the next three days, the trifecta of GDP-labor market-trade data all beat expectations. Thus, with a relatively unanticipated 25-bps cut today, I would be expecting weak Australian and Chinese data over the next few days, all of which could underpin a move in AUDUSD towards $1.0000 by the end of May.

Elsewhere in FX today, the Euro is the top performer as German Factory Orders for March beat expectations and raising hope that the economic slowdown in the core is exaggerated. But it is worth pointing out that a significant detractor from German firms’ competitive edge – the Japanese Yen’s weak exchange rate – truly didn’t materialize until late-March/early-April, when the Bank of Japan announced its full throttle easing policy. Thus, the impact of a higher EURJPY exchange rate, which is likely to stay elevated near or above ¥130.00 (barring significant fundamental distress in Europe) hasn’t been quite felt yet by exporters for a long period. I’m not inspired by this German data, and neither is the Euro it seems – after all, it is working on a second consecutive Inside Day versus the US Dollar. 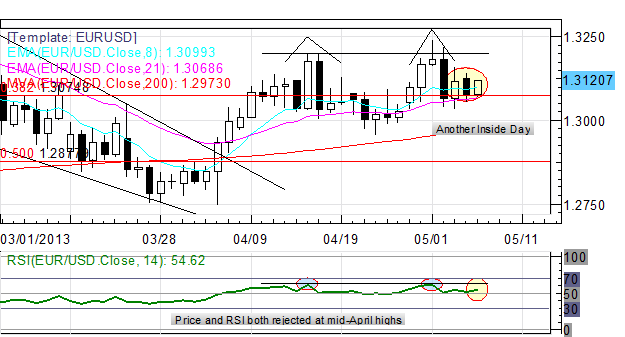 EURUSD: The EURUSD is working on a second consecutive Inside Day today after the German data, but a lack of bullishness has failed to produce a break towards Friday’s highs. I maintain that “there’s clearly significant selling interest above 1.3200, as a Double Top has formed coinciding with price contained twice at the 66 level in RSI. The high for May came on the first trading day of the month (just like in February), so technically I have a bearish bias. With respect to the Inside Day forming today, however, I am neutral. In either case, a print above 1.3245 would negate the bearish bias, while a move below 1.3030 (last week’s low) should spur further selling.” 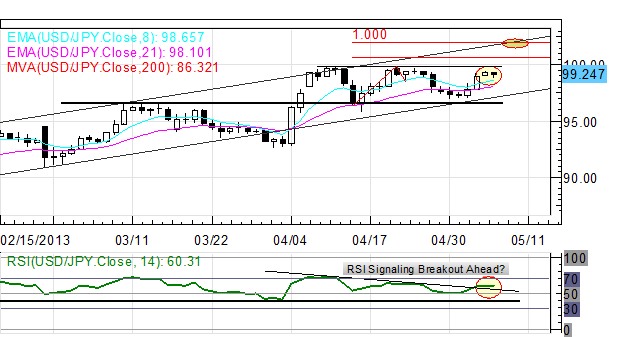 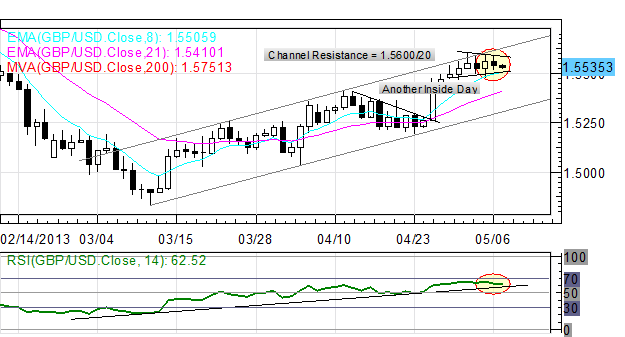 GBPUSD:The GBPUSD is working on a second consecutive Inside Day as price holds near the top rail in the ascending channel that’s been in place off of the March 12 and April 4 lows. Although near-term momentum has turned higher for the Pound, rejuvenated US data could be the spark for a return towards channel support, likely found near 1.5400 (mid-April swing highs) by the end of next week. While channel support today comes in at 1.5290/310, a move towards these levels seems unlikely at present time. It’s also worth noting that the recent consolidation could be a Bull Flag, which is given credence by the net short positioning of retail traders. In either case, I’ll be watching for a move above 1.5600/10 or below 1.5475/500 before a trade is taken. 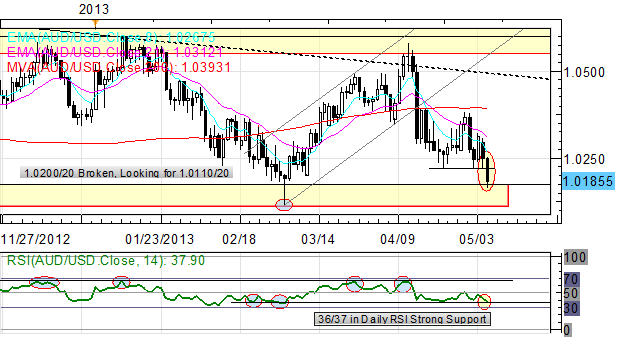 AUDUSD: The RBA rate cut spurred a break of the 1.0200/20 level noted yesterday, and sellers have indeed been inspired to continue the push towards yearly lows just above 1.0100. The near-term bearish bias would be negated if price trade above 1.0385, the topside limit of the Bearish Evening Star candle cluster. It is worth noting that price and RSI are falling into levels where support has been found before; a break here would be cataclysmic. It is also worth noting that the uptrend off of the June 2012 and March 2013 lows broke today, suggesting a retest of 0.9850/900 might be in the cards over the coming weeks. 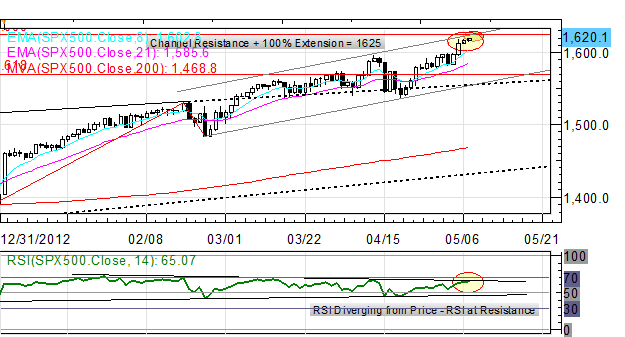 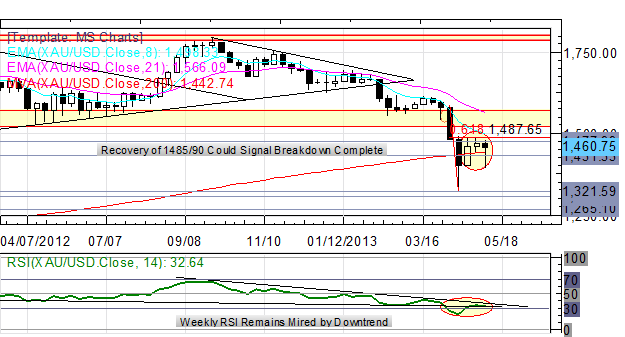