Consolidation the Theme as Aussie, Euro, and Pound Form Inside Days vs USD

“Risk off” wouldn’t be quite the term I would use to describe price action thus far at the start of the first week of May, but the US Dollar is the top performer while the Australian Dollar lags, so there is certainly a feel of tepidness today. Despite the buck’s outperformance, the Dow Jones FXCM Dollar Index (Ticker: USDOLLAR) is stuck within Friday’s NFP range, which is fitting considering that three of the four components of the USDOLLAR, the Australian Dollar, the British Pound, and the Euro, are working on Inside Days versus the US Dollar itself.

Consolidation will likely be the theme for the day, and for good reason: traders need a breather after last week set forth a Fed policy meeting on Wednesday, an ECB policy meeting on Thursday, and the April US labor market report on Friday. A quick look at the calendar shows that there’s some low level Canadian data due around the start of trading in New York, but aside from those data, I won’t be expecting anything significant across the newswires for today.

Instead, now that it is the beginning of May, it’s important to grapple with the implications of the popular moniker, ‘sell in May and go away.’ May’s returns for the S&P 500 are eighth-worst among the twelve months in the year, averaging a mere +0.21% gain since 1950 (the worst month is September, averaging a loss of -0.60%). May actually begins the worst stretch for investors during the year. Since 1950, on average, the Dow Jones Industrial Average has gained +0.3% between the beginning of May through the end of October. By contrast, investing in the beginning of November and selling at the end of April has produced an average gain of +7.5%. While the bulls are firmly in control of US equities right now, it should be noted that margin debt at NYSE member firms is at levels unseen since the 2000 and 2007 market tops. 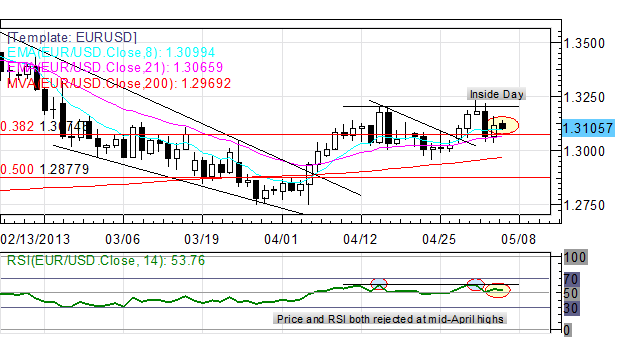 EURUSD: The EURUSD is working on an Inside Day today after the brief rally on Friday, and given the divergence in recent Euro-zone and US commentary and data, it seems that downside pressure is likely to remain on the EURUSD. With that said, there’s clearly significant selling interest above 1.3200, as a Double Top has formed coinciding with price contained twice at the 66 level in RSI. The high for May came on the first trading day of the month (just like in February), so technically I have a bearish bias. With respect to the Inside Day forming today, however, I am neutral. In either case, a print above 1.3245 would negate the bearish bias, while a move below 1.3030 (last week’s low) should spur further selling. 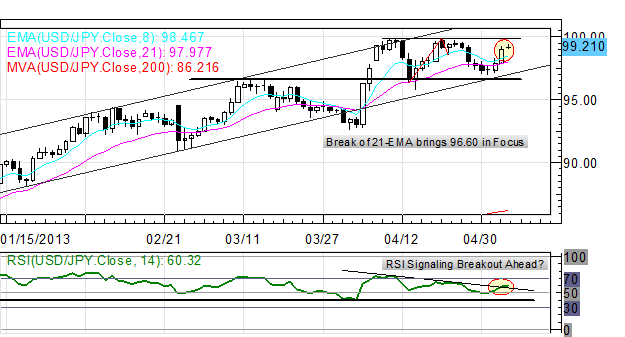 USDJPY: As has been the case in the USDJPY pullbacks throughout 2013, the most recent sell-off in the pair saw the 8-/21-EMA structure compress close to the point of flipping to bearish, but price firmed and turned higher ahead of such an event. Accordingly, a move back towards 100.00 is in the cards, and a less-dramatic Bullish Ascending Channel appears to be forming once more. I like USDJPY higher now that US data has started to improve, and a move above 99.95 would warrant a long entry in the pair for a quick move towards 102.00. 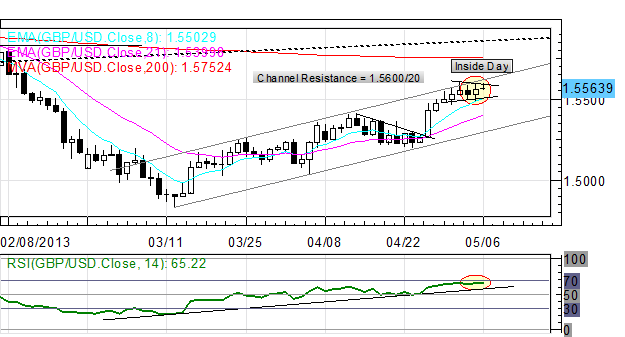 GBPUSD: The GBPUSD is working on an Inside Day as price clings to the top rail in the ascending channel that’s been in place off of the March 12 and April 4 lows. Although near-term momentum has turned higher for the Pound, rejuvenated US data could be the spark for a return towards channel support, likely found near 1.5400 (mid-April swing highs) by the end of next week. While channel support today comes in at 1.5290/310, a move towards these levels seems unlikely at present time. It’s also worth noting that the recent consolidation could be a Bull Flag. In either case, I’ll be watching for a move above 1.5600/10 or below 1.5475/500 before a trade is taken. 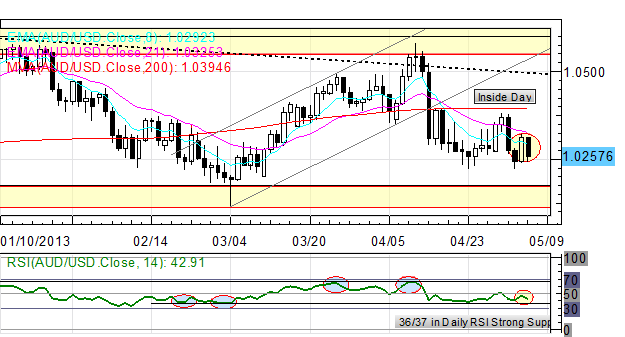 AUDUSD: The AUDUSD is working on an Inside Day as price continues to be pressured lower by a mix of weak Australian and Chinese data. Coupled with better than expected April US labor market data on Friday, the Bearish Evening Star candle cluster that developed early last week holds credence. Accordingly, a move below 1.0200/20 should revitalize sellers for a push back towards the yearly lows just above 1.0100. The near-term bearish bias would be negated if price trade above 1.0385. 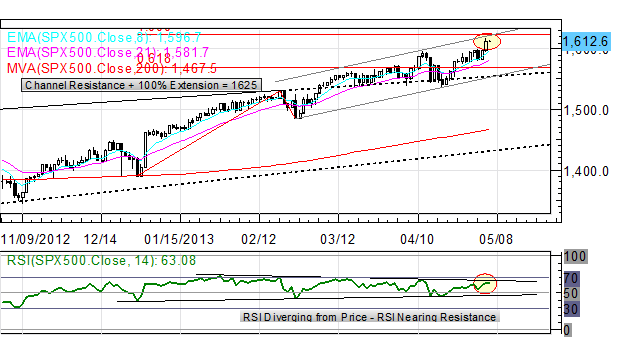 S&P 500: The headline index remains strong although there is some theoretical resistance coming up (this is unchartered territory, so forecasting price relies heavily on valuations, mathematical relationship, and pattern analysis). As first noted in mid-April, 1625 should be a big figure where sellers come in: channel resistance off of the February 25 and April 18 lows (drawn to the April 11 high) aligns neatly with the 100% Fibonacci extension off of the December 28 (fiscal cliff) and February 25 (Italian election) lows. It’s hard to be bearish risk right now, but it is worth noting that the divergence between price and RSI continues, suggesting that few new hands are coming into the market to support price (recent volume figures would agree). 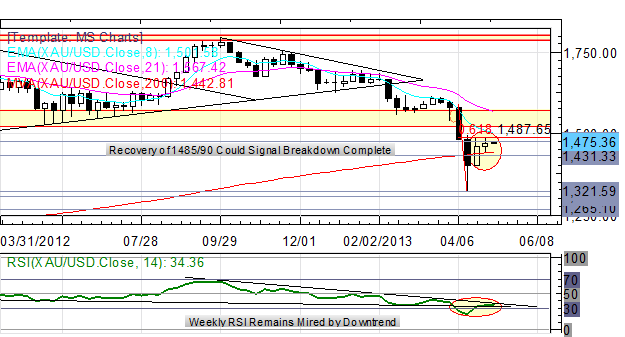 GOLD: Price has rebounded nicely following the dramatic sell-off in the beginning of April, yet remains contained by the crucial 61.8% Fibonacci retracement at 1485/90. This “Golden Ratio,” if achieved with a weekly close above, would suggest that a major bottom is in place, setting up for a rally back towards 1565/70 at a minimum. If the US Dollar turns around, however (as many of the techs are starting to point to), then Gold will have a difficult gaining momentum higher.