The Euro is slightly lower across the board (but for against the Australian and New Zealand Dollars) ahead of the vaunted European Central Bank Rate Decision today, but it’s unlikely that the Euro remains relatively unchanged on the day for too long. At this point in time, a 25-bps rate cut has essentially been priced into both credit and FX markets; accordingly, we’re looking for a greater response from the ECB in order to determine which way the Euro should trade.

There are two sides of the equation to consider with respect to today’s ECB policy meeting. On one hand, calls for a rate cut of been growing in volume, and we’ve seen Italian and Spanish bond yields move towards all-time lows on the shorter-end of the curve. Recent data would suggest that a rate cut is necessary, with the core countries today showing that deflation is becoming prevalent, at least at the factory gate. The other side of the coin is more complicated: what if the ECB’s rate cut is the only policy move that is made? At this point in time, because of the broken transmission mechanism that has prevented the flow of credit into the periphery at the same level of ease and security as it does into, say, Germany, there are very few that believe a rate cut of any magnitude will help. Attention is thus draw to non-standard measures, which is where the real juice in the ECB policy meeting is today.

Ultimately, because the rate cut is essentially priced in, for the Euro to see any significant swell of strength, the ECB will need to address how policy is being transmitted through the Euro-zone, and ways to increase credit flow to the periphery. Collective thought suggests that efforts to improve SME lending (small and medium enterprises) would be the best outcome for the Euro; without it, disappointment should be afoot. It is my belief that we’ll see a rate cut and a dovish tilt from ECB President Mario Draghi, but any measures that would utilize the ECB’s balance sheet as a policy tool are likely sidelined for the time being. 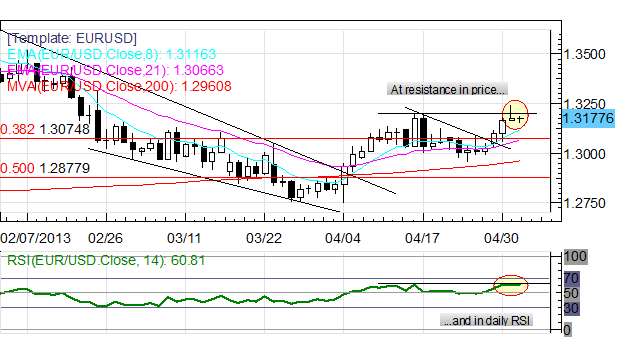 EURUSD: The EURUSD put in an Inverted Hammer yesterday as the breach of the mid-April swing highs near 1.3200 proved to be fruitless. The rejection in price also coincided with the rejection in the former highs seen in daily RSI, meaning that there needs to be a strong fundamental catalyst to underpin a breakout or breakdown (thankfully, the ECB is today). Without additional policy measures outside of a rate cut, the Euro could be weighed by disappointment, with a sell-off pushing the pair back towards 1.3075, the 38.2% Fibonacci retracement on the July 2012 low to the February 2013 high. Shorts should be contained to 1.3245/50, just above the monthly high. 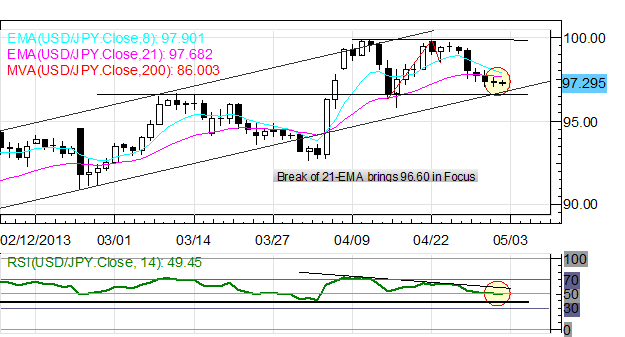 USDJPY: No change as price holds below the 21-EMA: “The Bullish Ascending Triangle pattern was negated late last week and now price has traded below both the 8- and the 21-EMAs, amid a break in the daily RSI uptrend. On Friday I noted “the USDJPY appears ripe for a pullback, which could be provoked by a weaker than expected US 1Q’13 GDP reading.” With this transpiring, a break of the 21-EMA at 97.80/85 could see price extend its losses to former resistance now support at 96.60.” 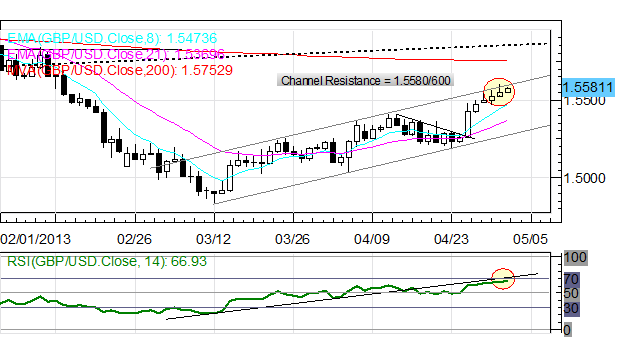 GBPUSD: The GBPUSD continues to ride the wave of optimism since last Thursday’s beat on the UK 1Q’13 GDP report, pushing up against channel resistance that’s been intact off of the March 12 and April 4 lows, at 1.5580/600. With the ECB meeting today, further gains by the Sterling are possible: on a disappointment, the GBP could see flows as an alternative regional safe haven; or on a positive ECB meeting, it could be viewed as a candidate to benefit from the residual impact of new growth measures. The EURGBP will be the key driver for the GBPUSD today. 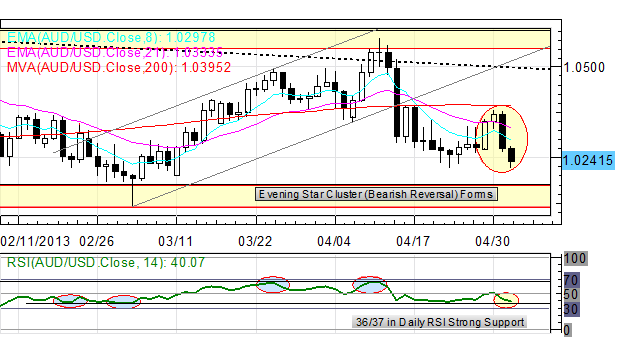 AUDUSD: An Evening Star candlestick cluster (bearish reversal) has materialized on the daily charts, with price below the 8- and 21-EMAs, as well as the 200-DMA. The daily RSI has fallen back towards 36, where RSI has held above all year. A break here exposes a run back towards the early-March lows just ahead of 1.0100. 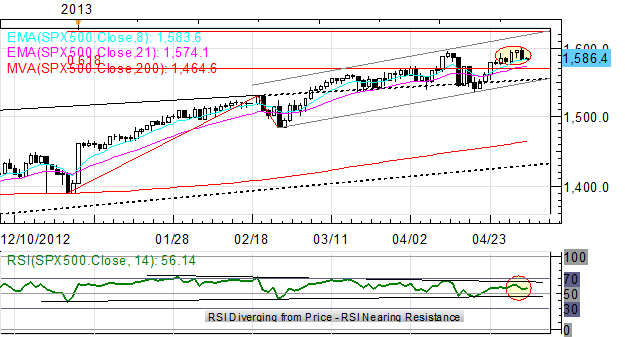 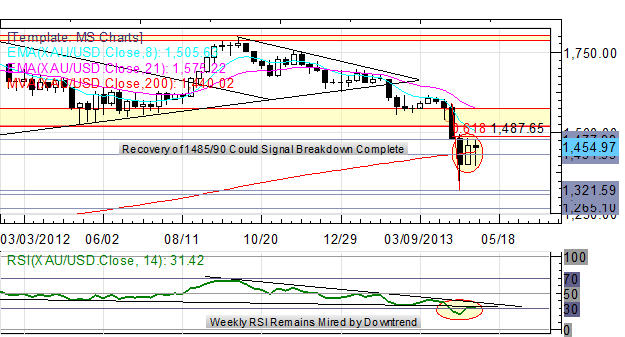