The Dow Jones FXCM Dollar Index (Ticker: USDOLLAR) is in the midst of its sixth consecutive day of declines ahead of the “true” beginning of the week: the ISM Manufacturing (APR) report due out at 10:00 EST/14:00 GMT. To emphasize this idea (the “true” beginning), one must consider that the Federal Reserve Rate Decision today is not one of the top two events this week; that is a rare occurrence.

Instead, the main attractions this week come on Thursday and Friday, in the form of the European Central Bank Rate Decision and the highly anticipated US labor market report, the Change in Nonfarm Payrolls (APR) and the Unemployment Rate (U3) (APR). As Chief Currency Strategist John Kicklighter notes, the US labor market report “is the lynchpin to stimulus as the Fed is looking for a 6.5% Unemployment Rate to change its policy bearings.”

The ECB Rate Decision this week is particularly important because of soaring rate cut expectations among economists, financial media, and market participants alike (including this analyst). In the early part of this week, the Euro has rebounded ahead of the ECB policy meeting, in what I believe to be a “mirror” of the July 2011 ECB policy meeting. At that time, then-president Jean-Claude Trichet raised the ECB main refinancing rate by 25-bps, and the EURUSD tumbled by over 500-pips in the ensuing two weeks. The point is: the Euro’s direction hinges on what’s best for the Euro-zone growth picture, not necessarily the yield outlook. Bond markets have already priced a cut in, so if no rate cut comes, the Euro will be in a tough spot – either way, immense volatility is expected. 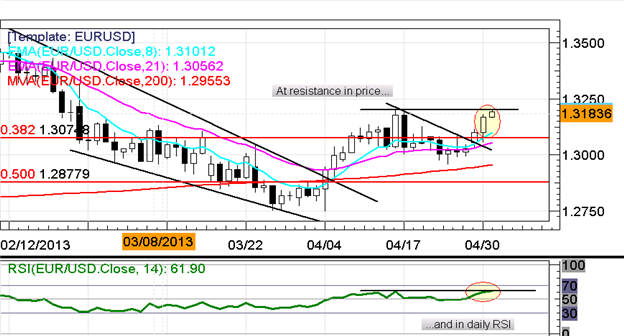 EURUSD: The EURUSD is threatening to break its mid-April swing highs around 1.3200 but it will prove difficult unless data misses horribly this morning ahead of the Fed meeting at 14:00 EST/18:00 GMT. The rally has also seen the daily RSI run into the corresponding highs with the mid-April swing highs, so a break here could see a huge explosion towards 1.3320/25, the highs seen before the Italian election results were announced. 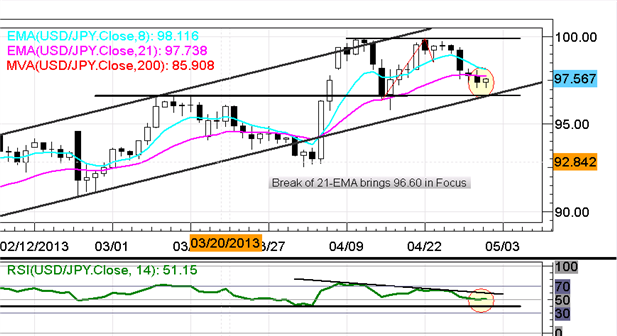 USDJPY: No change as price leaks below the 21-EMA: “The Bullish Ascending Triangle pattern was negated late last week and now price has traded below both the 8- and the 21-EMAs, amid a break in the daily RSI uptrend. On Friday I noted “the USDJPY appears ripe for a pullback, which could be provoked by a weaker than expected US 1Q’13 GDP reading.” With this transpiring, a break of the 21-EMA at 97.80/85 could see price extend its losses to former resistance now support at 96.60.” 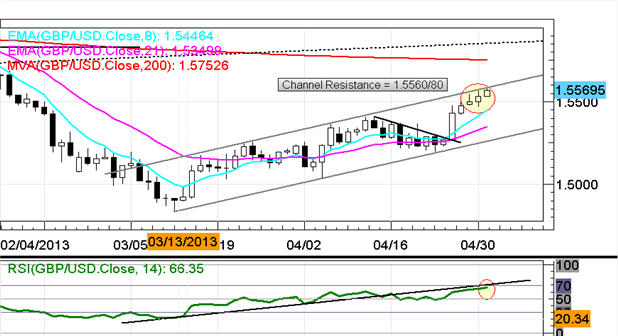 GBPUSD: The GBPUSD has extended its winning streak today after the UK Manufacturing PMI (APR) report showed that the manufacturing sector contracted less than expected, bucking fears of a return to recession in the 2Q’13. This bodes well for the GBPUSD, which has been riding a wave of optimism since last Thursday’s beat on the UK 1Q’13 GDP report. Resistance is close by at 1.5560/80, however, given the channel that’s been intact off of the March 12 and April 4 lows. 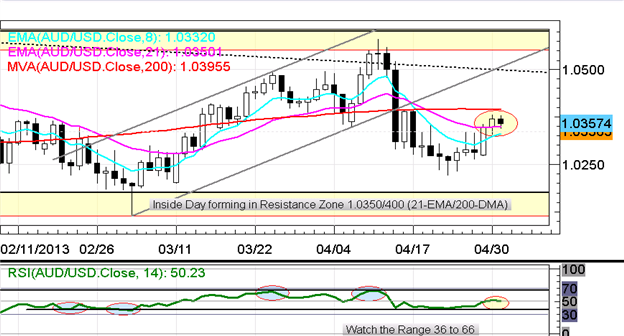 AUDUSD: No change as daily price forms an Inside Day at the same levels seen the past two days: “Last week I said: “Mid last week the 8-/21-EMA structure flipped bearish amid the breakdown in the RSI uptrend, coinciding with the rally off of the March 4 and April 8 lows. Fundamentally speaking, amid declining base metals’ prices and poor data out of China, it is our preference to sell the commodity currencies. Technically speaking, it is worth noting that the AUDUSD failed to find follow through on the potential basing pattern, a three day cluster of “Doji-Hammer-Doji.”” I remain neutral and I am looking to sell after the Fed meeting today. 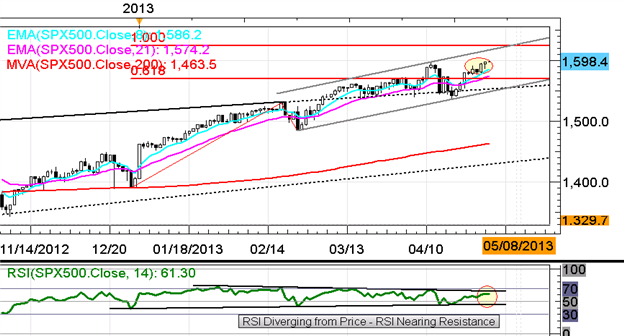 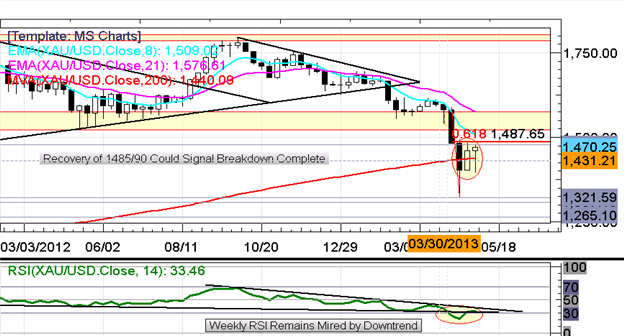