High beta currencies and risk-correlated assets are consolidating on the day (AUDUSD: -0.06%; NZDUSD: +0.19%; USDCAD: -0.02%) ahead of major headline event risk scheduled before the start of the US trading session on Friday. Of note, the Japanese Yen is the top performer, which isn’t really a surprise considering that the Bank of Japan didn’t make any material changes to its current policies; instead, it promised to continue to expand its monetary base without issuing any specific details.

With the USDJPY declining away from ¥100.00 for the time being, the big question now is: what can provoke the pair to turnaround now that traders are cutting down on their short Yen positioning? The US 1Q’13 GDP print is the perfect catalyst that could produce a major reaction and finally produce a break of the elusive 100.00 level.

The US economy is expected to have grown by +3.0% annualized in the 1Q’13, from +0.4% in the 4Q’12, which comes as a bit of a surprise considering that US politicians produced ill-timed and poorly thought out policies in order to unnecessarily trim the country’s budget deficit (research has increasingly shown that austerity before “booms” or “peaks” in the business cycle can be counterproductive). Accordingly, in light of the payroll tax increase and the budget sequestration in March, I find the expectation for a print above +3.0% unlikely. Nevertheless, should it materialize, we should see the first print in USDJPY above 100.00 since April 2009. 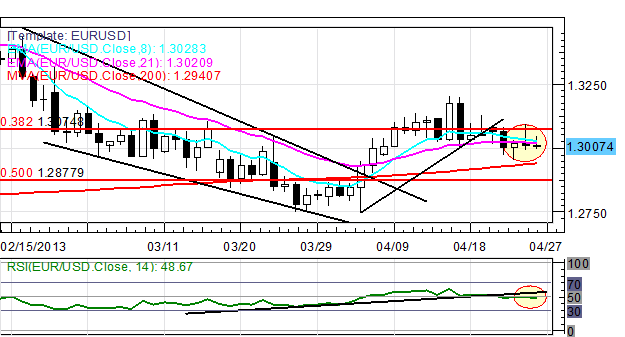 EURUSD: The pair continues to cling to the $1.3000 figure, consolidating beneath the 8- and 21-EMAs for the fourth consecutive day. With an ECB rate cut being priced in for next week, traders are looking for a catalyst to revive selling: the US 1Q’13 GDP print fits the bill. Yesterday’s Inverted Hammer and today’s tempered price action suggest that a strong growth reading out of the US could revive EURUSD bears and see the pair back towards its 200-DMA at 1.2940/45. 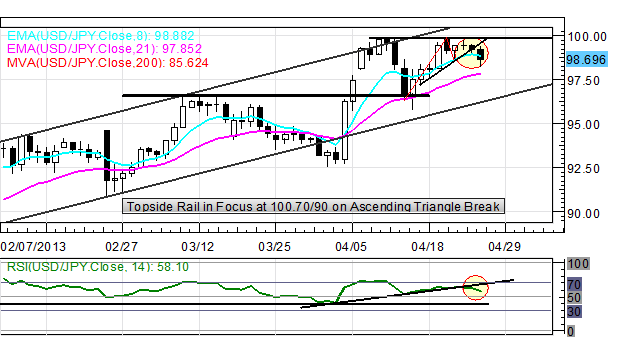 USDJPY: No change: “There are two possible outcomes here: a Bearish Double Top below 100.00; or a Bullish Ascending Triangle.” I also noted that “with the daily RSI uptrend intact, I am partial to the bullish outcome, which is reinforced by price remaining supported by the 8-EMA, now at 98.85/90. The Hammer yesterday at the 8-EMA bolsters the bullish case as well.” However, price has traded below the 8-EMA, and the diagonal support for the Bullish Ascending Triangle has given way amid a break in the daily RSI uptrend. Accordingly, the USDJPY appears ripe for a pullback, which could be provoked by a weaker than expected US 1Q’13 GDP reading. 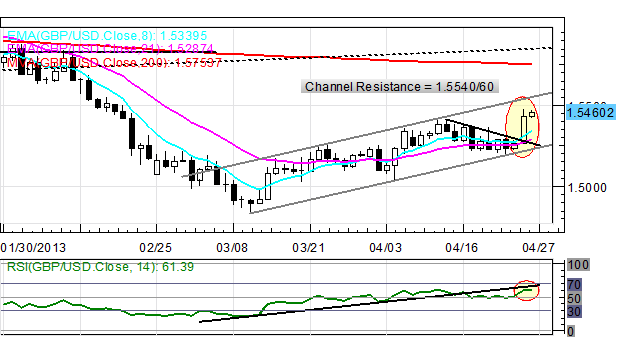 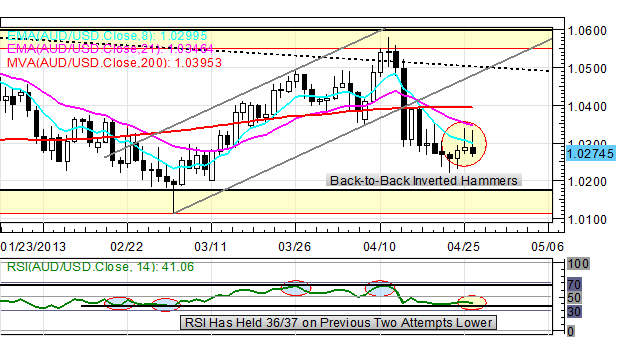 AUDUSD:Mid last week the 8-/21-EMA structure flipped bearish amid the breakdown in the RSI uptrend, coinciding with the rally off of the March 4 and April 8 lows. Fundamentally speaking, amid declining base metals’ prices and poor data out of China, it is our preference to sell the commodity currencies. Technically speaking, it is worth noting that the AUDUSD failed to find follow through on the potential basing pattern, a three day cluster of “Doji-Hammer-Doji.” Now, with back-to-back Inverted Hammers (bearish reversal candles) forming on the daily chart, alongside bullish retail sentiment, we find that it is possible that AUDUSD makes a run towards the yearly lows just above 1.0100. 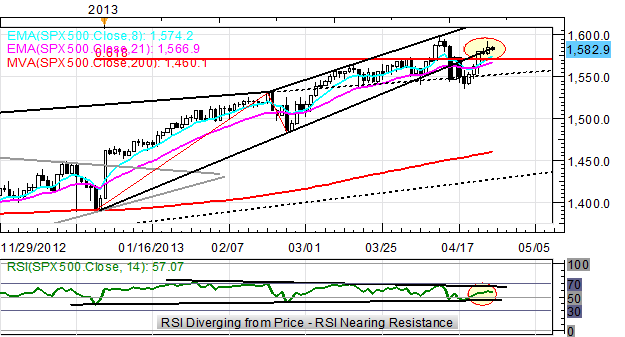 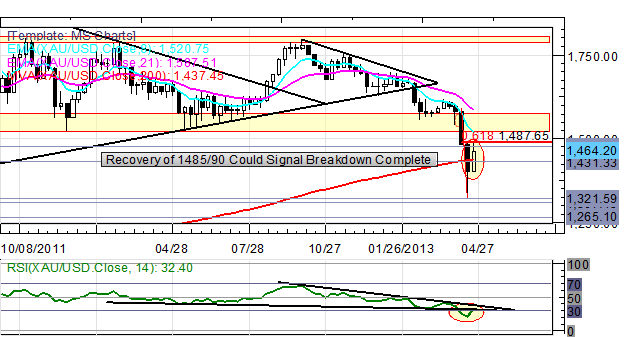