GBP/USD Back Above $1.5400 as GDP Cruises; USD Down Across the Board

The Dow Jones FXCM Dollar Index (Ticker: USDOLLAR) is struggling to find any semblance of follow through ahead of the US 1Q’13 GDP report due tomorrow, as investors reconsidered their biases on two of the most liquid currencies, the British Pound and the Japanese Yen. The strength seen by these two can simply be summed up as shifting expectations around their respective central banks’ policies, in light of the fact that the UK economy is stronger than previously thought, while the Bank of Japan is unlikely to implement any other drastic easing steps when it announces its policy decision tomorrow.

Sticking with the Sterling for a moment, the growth figures today are promising, but deceiving. The UK economy expanded by +0.3% q/q in the 1Q’13, good for a +0.6% y/y print, the highest such reading since the 4Q’11. The data comes as a big wave of relief for the more recently criticized government, under attack for its severe austerity policies that have led to the longest peacetime recession since the 1920s. In fact, the UK economy remains approximately -2.5% to -2.7% off of its peak growth seen before the global financial crisis in that began in 2007/2008, a point that underscores how sluggish the recovery will be.

While the report overall will be interpreted as a positive for the government – Chancellor of the Exchequer Osborne was in desperate need of support after the UK lost its ‘AAA’ rating to a split ‘AA+/Aa1’ rating – it also means that the current policies in place are likely to remain, now that the economy’s handlers are seeing positive data, finally. In the near-term, the British Pound looks to regain some more of its losses against the Euro and the US Dollar as the likelihood of more QE from the Bank of England is diminished and Gilt yields recover. 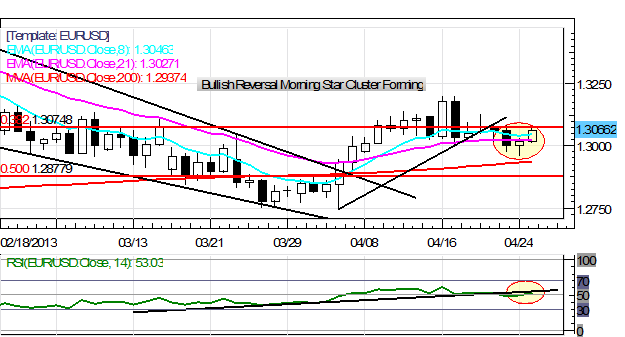 EURUSD: No change: “After stalling for several days at the 38.2% Fibonacci retracement from the Jul’12 low to the Feb’13 high at 1.3075, the EURUSD has fallen back below its 8-EMA and 21-EMA amid a breakdown in the daily RSI uptrend. Although retail sentiment remains short (thus the contrarian SSI indicator is bullish), we’ve seen positioning narrow, a sign that the breakdown transpiring may be legitimate. With a rate cut being tentatively priced in (see: Italian and Spanish bond yields), soft support at 1.3000 has broken. Losses could extend to 1.2930/50 (200-DMA) in the short-term. Rallies should be capped by 1.3130 and 1.3200/10.” The breakdown call may have been premature, now that the EURUSD is working on a Bullish Reversal Morning Star candle cluster; the key will be the US 1Q’13 GDP report tomorrow. 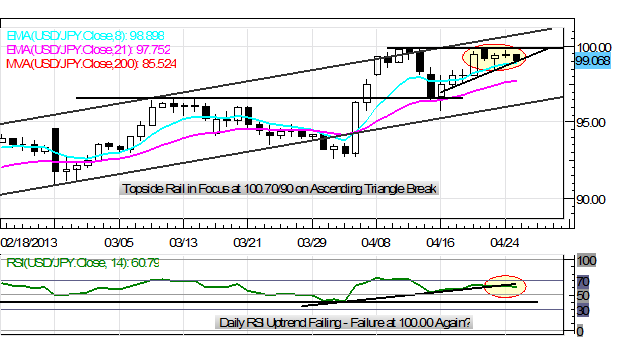 USDJPY: No change: “There are two possible outcomes here: a Bearish Double Top below 100.00; or a Bullish Ascending Triangle. With the daily RSI uptrend intact, I am partial to the bullish outcome, which is reinforced by price remaining supported by the 8-EMA, now at 98.85/90. The Hammer yesterday at the 8-EMA bolsters the bullish case as well. Deeper pullbacks eye 97.60/65 (21-EMA) and 96.60.” 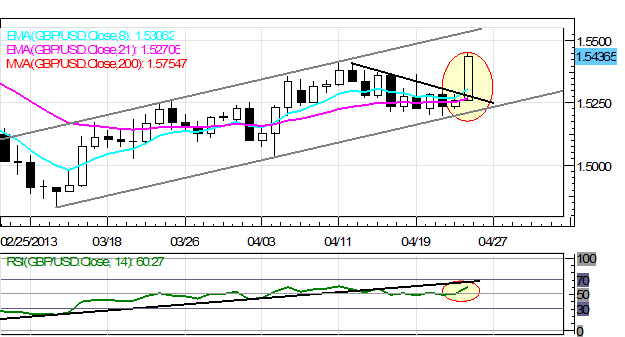 GBPUSD: After price consolidated just above its lowest levels since early-April, the breakdown in RSI has steadied as well, holding near 50 and leaving ample room for a rebound given the proper catalyst. Enter the UK’s 1Q’13 GDP report, which crushed expectations and lit a fire under the British Pound. Now, the GBPUSD has displayed a very clean rebound off of the lower rail of the ascending channel off of the March 12 and April 4 lows, touched on Tuesday at 1.5175/200. Now that the minor downtrend from the April 12 high has reversed, so too has investor sentiment, with retail bias flipping short yesterday, the day before the strong reversal higher. Accordingly, with the fundamental, technical, and positioning pictures lining up, there is room for the GBPUSD to run higher towards topside channel resistance at 1.5535. 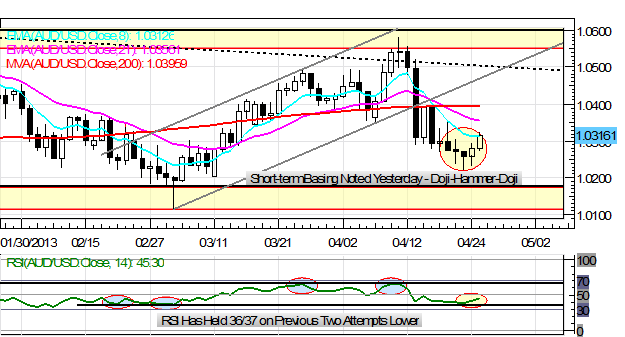 AUDUSD: No change: “Channel support off of the March 4 and April 8 lows at 1.0390/400 broke after another rejection at 66 in the daily RSI suggests that another period of weakness could be beginning. Now the 8-/21-EMA structure has flipped bearish amid the breakdown in the RSI uptrend. Although shorter-term time frames (1H, 4H) have shown the proclivity to force consolidation when they become this oversold, I favor selling bounces in the AUDUSD amid declining base metals’ prices and poor data out of China.” It is worth noting that the AUDUSD is working on a three day pattern of “Doji-Hammer-Doji,” a potential basing pattern that would suggest another rally. 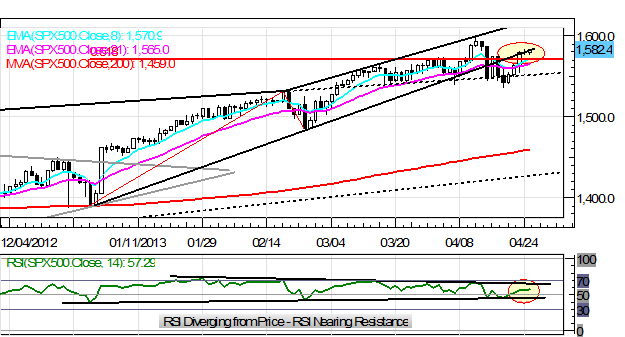 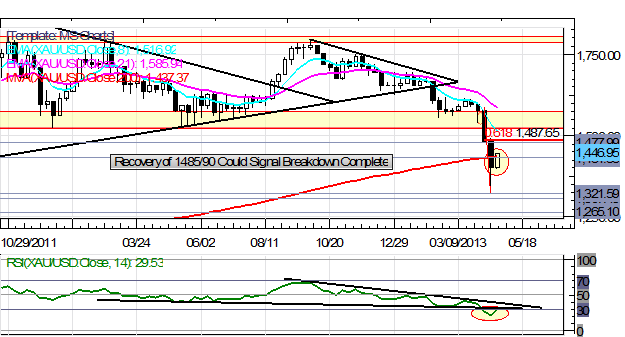