Over the weekend, we heard from People’s Bank of China Governor Zhou Xiaochuan, who painted a dourer outlook for the world’s second largest economy. Governor Zhou said “China is undergoing economic restructuring, which sometimes is not in lockstep with growth...We need to sacrifice short-term growth for the purposes of reforms and structural adjustments.” Indeed, the Chinese 1Q’13 GDP figure was a primer for things to come, as evidenced by the latest private sector PMI Manufacturing report.

The Chinese HSBC PMI Manufacturing (APR) index dropped to 50.5 from 51.6 in March, well-below the 51.5 consensus forecast. Although the index remains in expansion territory (>50.0), it’s clear that the uptick in government-backed Chinese data the past few weeks (notably the jump in M2 Money Supply growth as well as increased New Yuan Loans) was not due to a rebound in the economy, but rather efforts to cushion the blow from impending slowdown in growth. Last week, I suggested this was a bullish sign; clearly, this was a wrong interpretation, and we should thus be bracing for “slower” Chinese growth. Accordingly, it is likely that pressure remains on the Australian and New Zealand Dollars for the time being, with the former faced with an increased change of a rate cut should domestic data follow Chinese data south.

Mirroring the slowdown in China is the slowdown hitting the Euro-zone core, with the German PMI readings for April falling back into contraction, and the broader Euro-zone PMIs holding in contraction territory for the fifteenth consecutive month. The Euro is being pressured to the downside as a result, but there’s potentially a silver lining: more stimulus could be around the corner. 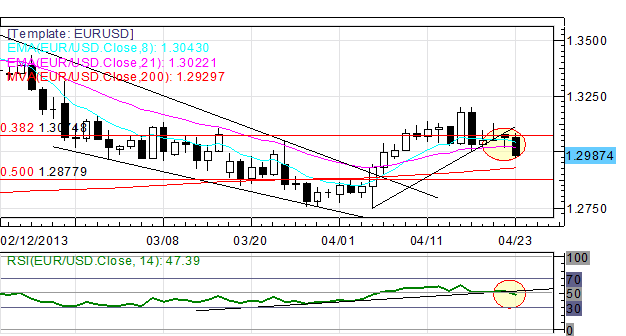 EURUSD: After stalling for several days at the 38.2% Fibonacci retracement from the Jul’12 low to the Feb’13 high at 1.3075, the EURUSD has fallen back below its 8-EMA and 21-EMA amid a breakdown in the daily RSI uptrend. Although retail sentiment remains short (thus the contrarian SSI indicator is bullish), we’ve seen positioning narrow, a sign that the breakdown transpiring may be legitimate. With a rate cut being tentatively priced in (see: Italian and Spanish bond yields), soft support at 1.3000 has broken. Losses could extend to 1.2930/50 (200-DMA) in the short-term. Rallies should be capped by 1.3130 and 1.3200/10. 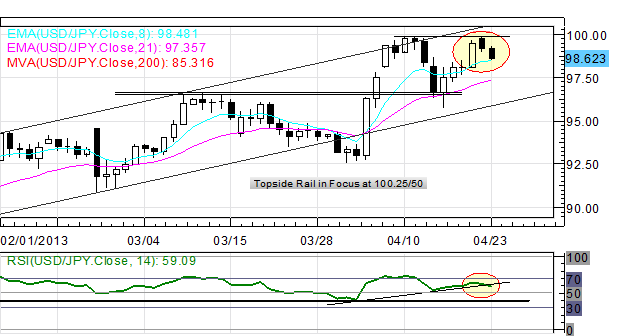 USDJPY: Yesterday I said “Former highs (now turned support) at 96.60 held last week, and amid the lack of progress out of the G20 this weekend, the Yen has found itself declining across the board. The USDJPY’s advance towards the elusive ¥100.00 figure comes after weeks of poor US data had held the US Dollar back, but now that it’s clear no one will stand in Japan’s way to debase its currency, selling pressure has intensified once more.” Spurned by 100.00 once again, a Bearish Double Top may have formed, though for now, price remains supported by the 8-EMA, now at 98.45/50. A rebound here and close above 99.00 would reduce the probability of the Bearish Double Top being valid. Deeper pullbacks eye 97.35/40 (21-EMA) and 96.60. 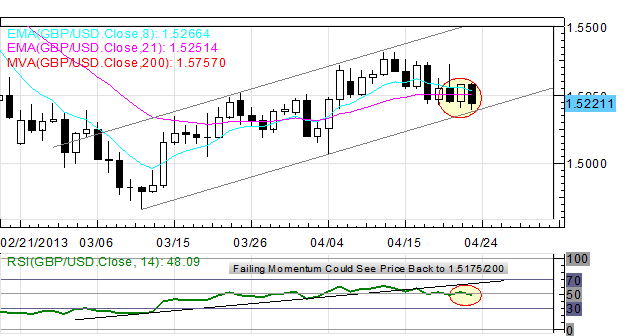 GBPUSD: The ascending daily RSI trend dating back to the early-March low broke during the middle of last week, opening up the floor for a downside move towards 1.5245/50 and eventually 1.5135/50. 1.5245/50 was touched earlier today, and suggests that downside momentum into 1.5175/200 should continue. At this point in time, now that retail sentiment has flipped to bullish, we are looking lower. It is worth noting that a modest 1Q’13 GDP print later this week could help the British Pound recover off of the bottom rail in its ascending channel off of the March 12 and April 4 lows. 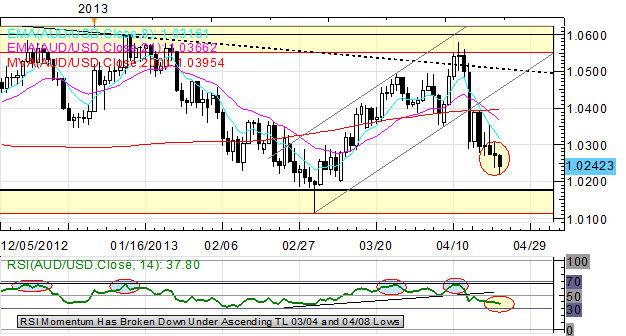 AUDUSD: No change: “Channel support off of the March 4 and April 8 lows at 1.0390/400 broke after another rejection at 66 in the daily RSI suggests that another period of weakness could be beginning. Now the 8-/21-EMA structure has flipped bearish amid the breakdown in the RSI uptrend. Although shorter-term time frames (1H, 4H) have shown the proclivity to force consolidation when they become this oversold, I favor selling bounces in the AUDUSD amid declining base metals’ prices and poor data out of China.” 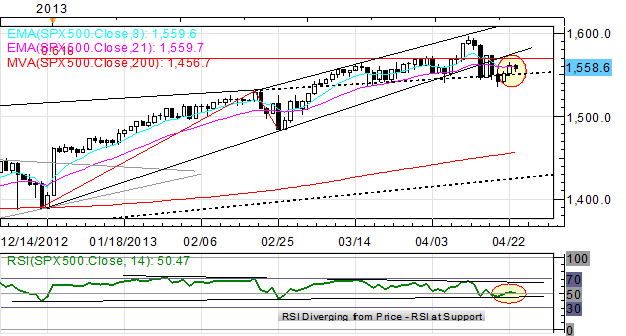 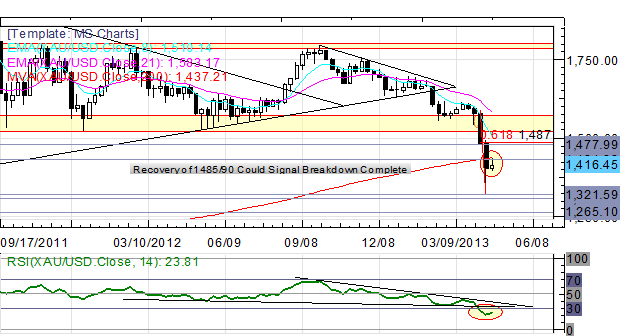