The majors are consolidating around the US Dollar today (as evidenced by the unchanged reading in the Dow Jones FXCM Dollar Index (Ticker: USDOLLAR) at the time of writing) despite some significant events out of Asia and Europe this past weekend that will shape investor sentiment for the coming weeks and months.

My attention is first drawn to Italy, where Giorgio Napolitano has become the first two-term Italian president ever, in what to me is a sign of the fractious political climate that has enveloped Europe’s third largest economy the past several years. Quite frankly, I don’t think removing this uncertainty from the equation will necessarily translate into a Euro positive (although bond markets are responding favorably, with the Italian 2-year note yield hitting an all-time low), as it means that there’s yet to be resolution to the hung parliament. If anything, the Italian government has a difficult road ahead, considering there’s essentially a perpetual lame duck government in place.

Out of Asia, People’s Bank of China Governor Zhou Xiaochuan made two big statements this weekend that have sweeping implications. First, there was no official protest from China regarding Japan’s new ‘Abenomics’ policies, and when considered in context of the world’s major developed economies rolling over as well, there are few geopolitical barriers preventing the Yen from weakening further. Given the lack of protest, the USDJPY has advanced towards the elusive ¥100.00 figure. Secondly, China may be seeing a period of lower growth on the horizon, as it appears that policy officials are readying for a period of structural evolution and rebalancing. Annualized China growth should be between 7.5 to 7.7% in the 2Q’13. 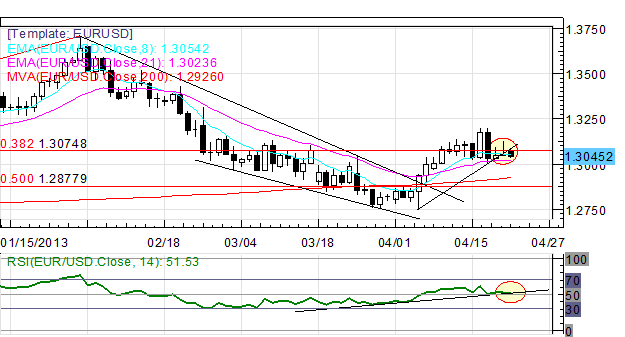 EURUSD: No change: “After stalling for several days at the 38.2% Fibonacci retracement from the Jul’12 low to the Feb’13 high at 1.3075, the EURUSD had surged to its highest level since February 25, when the inconclusive Italian election results were announced. But the bullish momentum was short-lived, with the pair falling right back below 1.3075 within a day. The daily RSI uptrend is starting to falter, suggesting that a big move higher will be necessary to sustain a near-term bullish outlook. For now, further upside should be capped by 1.3200/05, at which point 1.3245/325 should be a major zone of resistance above. Declines should be supported by the 8-EMA/21-EMA confluence zone at 1.3020/65, and given retail sentiment, we expect the EURUSD rally to continue.” 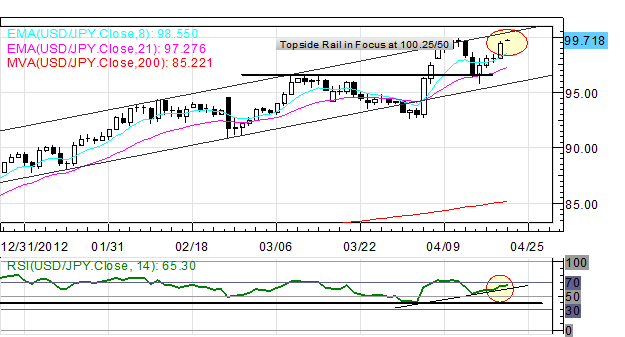 USDJPY: Former highs (now turned support) at 96.60 held last week, and amid the lack of progress out of the G20 this weekend, the Yen has found itself declining across the board. The USDJPY’s advance towards the elusive ¥100.00 figure comes after weeks of poor US data had held the US Dollar back, but now that it’s clear no one will stand in Japan’s way to debase its currency, selling pressure has intensified once more. Resistance comes at 100.00 then 100.25/50. Support comes in at 98.55 (8-EMA). 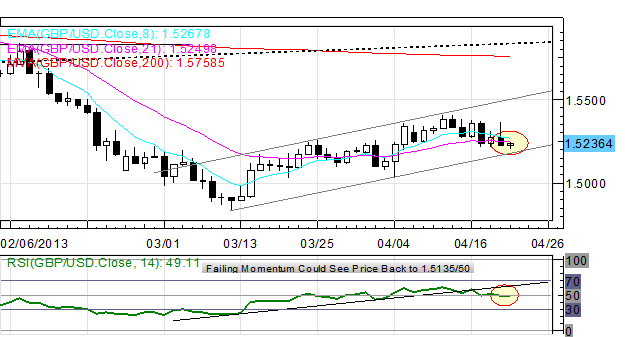 GBPUSD: The ascending daily RSI trend dating back to the early-March low broke during the middle of last week, opening up the floor for a downside move towards 1.5245/50 and eventually 1.5135/50. 1.5245/50 was touched earlier today, and suggests that downside momentum into 1.5135/50 should continue. A modest 1Q’13 GDP print later this week could help the British Pound recover off of the bottom rail in its ascending channel off of the March 12 and April 4 lows. 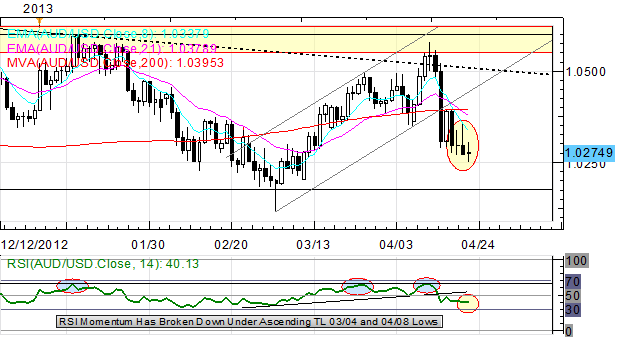 AUDUSD: Channel support off of the March 4 and April 8 lows at 1.0390/400 broke after another rejection at 66 in the daily RSI suggests that another period of weakness could be beginning. Now the 8-/21-EMA structure has flipped bearish amid the breakdown in the RSI uptrend. Although shorter-term time frames (1H, 4H) have shown the proclivity to force consolidation when they become this oversold, I favor selling bounces in the AUDUSD amid declining base metals’ prices and poor data out of China. 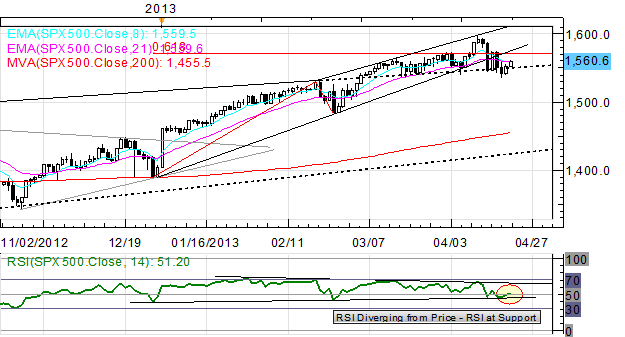 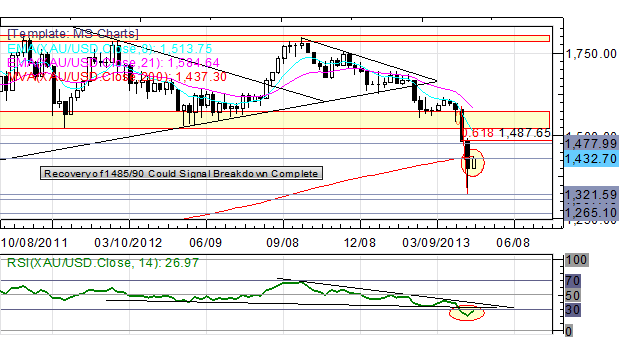